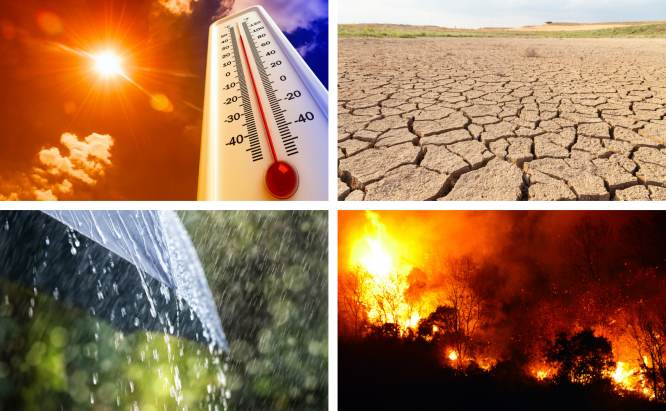 The figures have been calculated to show the increased risk of high heat, drought, extreme rainfall, and wildfires across France due to climate change by 2050 and beyond Pic: VladisChern / Brian A Jackson / Alvarobueno / RoBBQ / Shutterstock

Weather researchers in France have calculated projections on how climate change will affect France, with three new rankings on the cities set to be most affected by heat, rain and drought, and wildfires.

Researchers at French forecaster Météo-France and the Institut Pierre Simon Laplace used data from the French Regional Climate data portal Drias and the most recent IPCC report, published on August 9, to compile their lists.

The full lists of 50 cities for each ranking can be seen on the Le Figaro website here.

Top 10 for increased numbers of high-temperature days and nights

All figures based on yearly averages. Temperature rise calculated based on the periods 1970-2005, and 2040-2070. The number of ‘extra hot days’ corresponds to the number of days on which the maximum daily temperature is 5C higher than average.

Mary Kerdoncuff, co-director of climatology and climate services at Météo France, said: “The continental aspect plays a role; but in contrast, as soon as we have a seaside coast, the temperatures are more controlled. When it comes to warming, there will be a clear southeast/northwest gradient.”

Temperature rises will be most noticeable in places such as Avignon and Nîmes; while in Brest and Cherbourg on the Atlantic coast, the rise will not reach higher than +1.15C.

Top 10 for increased risk of drought and heavy rain

All figures based on yearly averages. The rise in the number of days of drought corresponds to the number of consecutive days when rainfall does not exceed 1mm. Extreme rain is calculated based on the number of extra days on which the 1% strongest rain falls.

Unsurprisingly, the areas in the Mediterranean are more likely to see more drought. In contrast, cities such as Dunkirk will be most affected by extreme rain.

The most recent Drias-Météo France report stated: “The regions that are most exposed [to rain] are those in the northern half [of the country], especially areas in the north and northwest and the Channel coast.”

Figures based on different projections from the Indice de Feu Météorologique (IFM; weather fire indicator), including data on humidity levels, wind, rainfall, and drought, to calculate the risk of potential fire.

Areas that are already at high risk of fire, including Côte d'Azur, will continue to experience problems, but the rise in risk will; not be as great, hence it not featuring on this ‘increased risk’ list.

What CO2 emission scenarios are the figures based on?

An “intermediate” scenario, which is neither “too optimistic, too pessimistic”, for the temperature and rain projections. This is known as the RCP4.5 scenario, which predicts that CO2 levels will stabilise towards the end of the century. For the fire ranking, they use a scenario known as A2, which is also known as RCP8.5 - a more pessimistic view.

What is the geographic precision of these projections?

The climate calculations are worked out by dividing France into 8,602 data points. To find the data for each city or town, the figures correspond to the nearest data points. Where there is more than one point, the figure is an average of the data given, or combines data for two cities, hence the inclusion of ‘Lyon-Villeurbanne’.

How credible are these figures?

They are the median of the projection models presented by the French Regional Climate data portal Drias. This regional climate model was evaluated and validated in the most recent IPCC (Intergovernmental Panel on Climate Change) report, published on August 9. The IPCC is the United Nations body for assessing climate change science.

Why show the change in temperatures, rain, and fire risk, and not the basic figures?

The difference is more meaningful when considered as a ranking, because, for example, it will always be hotter in the south of the country than in the north, and more rainy in the west than elsewhere.

Temperatures highs of 30-40C forecast for much of France this week
No sunshine in France this August (so far) - when will it change?
Hotter, drier summers ‘will be the new normal in France’
Mini-tornado rips off roof as more extreme weather hits France