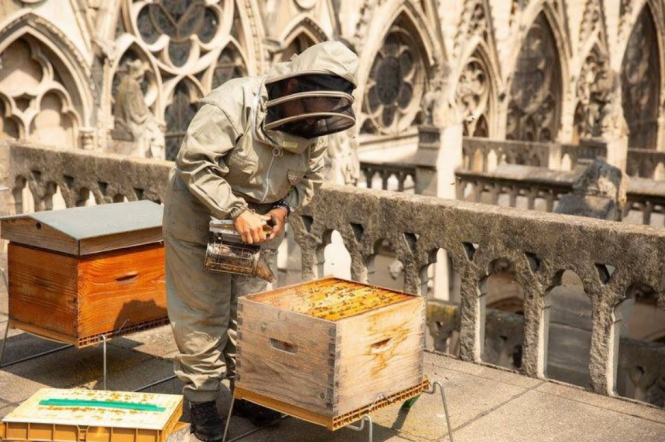 The hives, which are managed by Nicolas Géant, were introduced to the cathedral roof in 2013
By Connexion journalist

Beekeeper Nicolas Géant, who manages the Notre-Dame hives, said that he hopes to see the bees and continue to care for them “next week”, after learning that they had survived the incident and had been spotted emerging from their hives in the cathedral in the past few days.

He had feared that the three hives had burned away, but has more recently seen satellite images that suggest they are still alive and in place.

He said: “The bees are alive. Initially I thought that the three hives had burned away, and I had no information. But later I saw that this was not the case, and the spokesperson at the cathedral confirmed to me that [the bees] were coming in and out of the hives.”

In case of fire, bees usually gorge themselves with honey and seek to protect their queen bee as a priority, he said.

Mr Géant explained: “This species [the European bee] does not abandon its hive. [These bees] don’t have lungs, but CO2 (carbon dioxide) makes them go to sleep.”

The beekeeper had received messages and calls from across the world asking to know if the bees had survived, he said.

He said: “I didn’t expect it. I received calls from Europe, of course, but also from South Africa, Japan, the United States and South America."

Since their introduction to the cathedral roof in 2013, the hives had produced around 25 kilos of honey each per year, usually sold to staff.

The aim of the introduction was to help the cathedral to preserve biodiversity, and - in the words of the Notre-Dame website - “remind people of the beauty of Creation and the responsibility of mankind towards it”.

The bees are of the “Brother Adam” Buckfast variety, of which one of the main characteristics is a mild temperament: often seen as an essential factor for city hives. (The breed was developed by Karl Kehrle, a Benedictine monk known as Brother Adam.)

Notre-Dame was severely damaged by a fire on Monday evening (April 15). The incident is thought to have started accidentally, due largely to the presence of building work and scaffolding.