Orly Airport reopens, but return to normal still years away 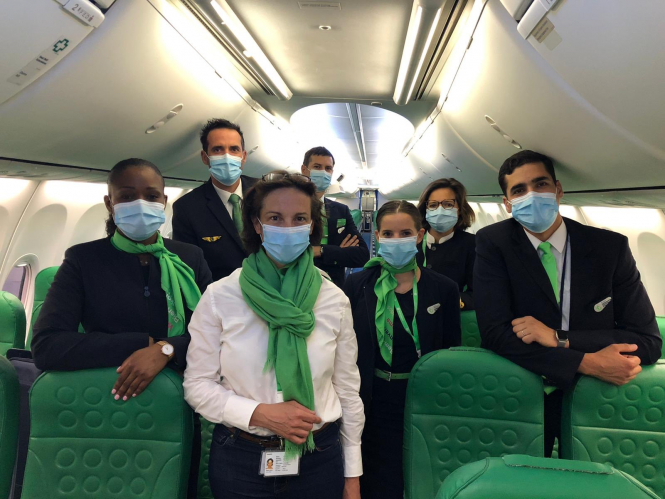 The Transavia France crew onboard the first flight to depart from Orly Airport on Friday June 26. Nathalie Stubler / Twitter
By Connexion journalist

Augustin de Romanet, The CEO of Groupe ADP which also manages airports Charles de Gaulle and Le Bourget, welcomed the reopening of Orly Airport Friday June 26, while stating that a full return to normal “could occur between 2023 and 2025”,

“The return to normal of significant international traffic... is not for tomorrow”, he said in an interview with French radio station RTL, citing the fact that countries such as the US and China are remaining cautious because of Covid-19.

This statement echoes the prediction made by Alexandre de Juniac, director of the International Air Transport Association, who claimed the same in an interview with Le Monde in May.

Orly Airport, which opened after 13 weeks of inactivity, will initially have 74 flights, including takeoffs and landings, flying to 25 destinations. That number will rise to around 200 flights in July, which Mr de Romanet said would still only be 25% of pre-pandemic levels.

Travellers will be able to fly from Orly Airport to countries such as Spain, Portugal, Iceland and Hungary, among others, but there will be no domestic flights. When asked to explain this, Mr de Romanet suggested it was an economic choice on behalf of the airlines.

No queues this summer

Mr de Romanet is hoping that with a reduced number of flights there will also be a reduction of people passing through Orly Airport, making it safer.

“My big hope is that there will not be any queues this summer”, he said.

He also reiterated the extra sanitary precautions that were being taken, such as having 150 hydroalcoholic gel dispensers available, and teams cleaning the airport with virucidal products several times per day.

“Every member of the airport community is committed to ensuring that the Orly Airport reopening takes place under the best possible conditions,” he said.

The wearing of masks will remain mandatory for passengers in the airport and on planes. Temperature checks are recommended, but not compulsory, at the point of departure. For those arriving at Orly Airport, Mr de Romanet said there will be cameras to detect any passengers with fever, similar to Charles de Gaulle Airport.