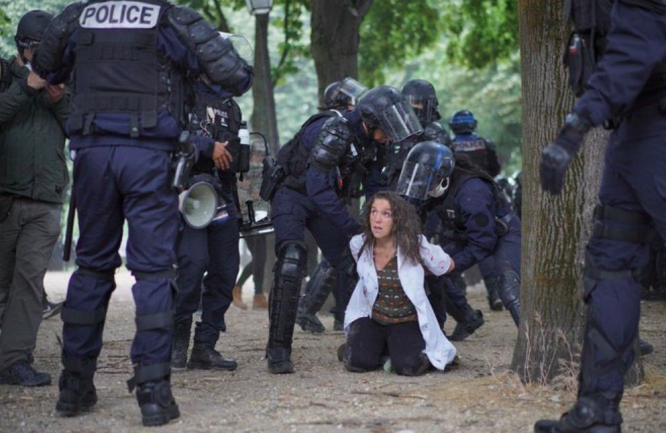 The arrest of a nurse during a protest by healthcare workers in Paris has sparked accusations of police violence.
By Joanna York

In videos circulated online, the nurse was seen being held against the ground by police and later with blood on her face after being arrested for throwing projectiles at, and insulting, police officers.

Footage from the protest shows police restraining the nurse by holding her chest to the ground while she asks for a ventoline, an inhaler containing a drug to help treat respiratory illness.

The arrest occurred in Paris, on the Esplanade des Invalides, during a protest by health workers over their working conditions on Tuesday June 16.

The nurse was arrested and held in custody for throwing projectiles in the direction of police. She was released from custody yesterday (June 17), after being charged with insulting public officials as well as rebelling and causing violence against public officials.

Journalist Remy Buisine shared a video of the nurse being arrested via Twitter.

In his post he described the arrest: “A woman, in her nurse’s scrubs, pulled by her hair during an arrest, ended up being evacuated with a bloody face during the protest at Invalides. She asked multiple times for her inhaler.”

The video shows a police officer dragging the nurse by her backpack, before sitting her next to a tree. As multiple police officers step into handcuff her, she can be heard shouting “Je veux ma ventoline (I want my inhaler)”.

Other police officers then form a barrier around the woman, which blocks the video footage, and ask those filming to move away. However, the nurse can later be seen being restrained with her chest against the ground by multiple police officers. As police officers escort the nurse from the scene, one gripping her hair, blood is visible on her face.

A second video, also posted on Twitter, shows the woman being led into the police station by officers.

She shouts to those filming “Je m’appelle Farida (my name is Farida)”, before a police officer uses their hand to cover her mouth and stop her speaking.

“That woman is my mother”

In a following Tweet, posted on June 16, journalist Imen Mellaz stated the arrested woman was her mother, and explained the nurse’s reasons for attending the protest.

She wrote: “That woman, she is my mother. 50 years old, nurse, for the past 3 months she’s worked 12-14 hours per day. She had Covid. Today, she protested so that her salary would be reviewed, and her work would be recognised. She is asthmatic.”

News services later confirmed that the nurse worked at l’hôpital Paul-Brousse in Villejuif (Val-de-Marne, Ile-de-France), where she leads a team of nurses in a geriatric ward.

Amid criticism over police handling of the arrest, police trade union, Le Syndicat Independent des Commissaires de Police, has since posted its own message to social media with the intention of “re-establishing the truth” of the situation.

Its tweet, posted on June 16, shows video footage from news site BFMTV of a woman, confirmed to be the arrested nurse, energetically throwing items towards police at the protest in Paris.

They write: “The kind nurse that needed her inhaler, and who has been presented as a victim of the police! She was throwing projectiles just before she was arrested! So, are we going to keep talking about police violence?”

Police sources have told to news site FranceInfo that a police officer hit by “pieces of pavement” thrown by the nurse lodged an official complaint against her on Wednesday, June 17.

The police have also confirmed that, following her arrest, they did give the nurse her inhaler.

Support for the nurse on Tuesday evening

As the hashtag #LiberezFarida (#FreeFarida) trended on Twitter, a gathering formed outside the police station where she was being held in the 7th arrondissement of Paris, attended by French politicians Eric Coquerel, Mathilde Panot and Danièle Obono.

After speaking with the nurse, Coquerel confirmed that she “had been injured during the arrest”.

Jean-Luc Mélenchon, leader of France’s left-wing Parti Socialiste, also showed support for the nurse, tweeting “Horrible: Farida the nurse is still handcuffed and injured without treatment. Do you realise? Handcuffed and injured. That’s the so-called police of the Republic.”

This incident comes amid large-scale protests against police violence in France, in solidarity with Black Lives Matter protests in the US and around the world.

In response to the protests, new anti-racism measures have been announced for French police, but these measures have since been protested by police themselves.

The nurse’s lawyer has confirmed that she has accepted the police charges brought against her; insulting public officials as well as rebelling and causing violence against public officials.

She explained her anger at the protest, saying that she had “cracked”, as a result of fatigue from seeing no improvement in work conditions at her hospital after the Covid-19 crisis passed, despite government promises. Her protest, she said, was against the State, rather than the police specifically.

She was released from police custody on Wednesday June 17, after being held overnight, with a court summons for September 25.