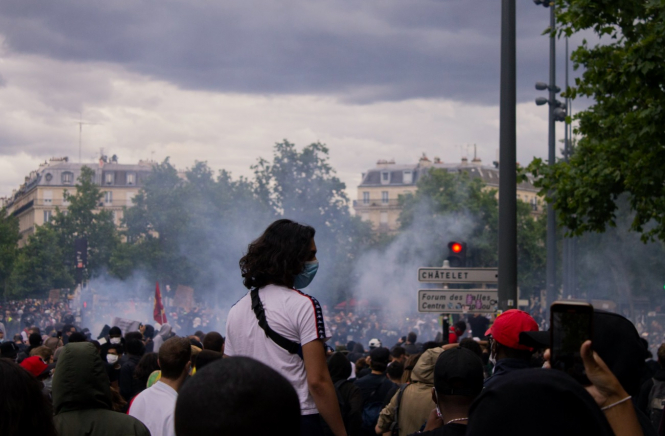 Protests against racism and police violence took place in Paris on Saturday June 13, as the ban on marches was lifted, and police themselves mounted protests
By Connexion journalist

Previously, gatherings of more than 10 people were banned under deconfinement rules, in the context of the wider state of health emergency.

But on Saturday June 13, le Conseil d’Etat - France’s highest administrative court - lifted the ban, allowing people the “right to protest” as long as they follow “barrier methods” such as wearing masks, and do not gather in groups of more than 5,000 people.

A statement from the court read: “The judge of le Conseil d’Etat has decided that the ban on protesting is not justified by the current health situation when barrier methods are able to be respected.

“The freedom to protest is a fundamental right, so the judge has decided that, except in specific circumstances, the ban on protests in public places is not justified by the health risks - except when physical distancing measures cannot be respected, or the event is likely to bring together more than 5,000 people.

“As a consequence, the judge is suspending Article 3 of the decree from May 31 2020, which states that public protests must submit a prior declaration.”

As per the existing deconfinement rules, gatherings of more than 5,000 people are still banned.

Despite the law change, a major demonstration against racism and police violence that was set to march through Paris on Saturday June 13 was blocked at its start by police, who said it had not been approved by the prefecture.

This led to clashes between law enforcement and protesters.

Lawyer for LDH, Patrice Spinosi, who helped bring the case, told the Agence-France Presse (AFP): “This is a very big victory. There was no reason that the right to protest should have been treated any differently than the right to gather for religious reasons. We are just sorry that this intervention came so late.”

He explained that the ban had reduced “the fundamental right to protest to almost nothing”, despite it being “one of the most essential democratic guarantees”.

LDH had called for the right to protest “safely”, with respect for barrier methods. It had said that “if the authorities were able to fine people for taking part in protests, then they would also be capable of cautioning protesters that are not respecting barrier method rules”.

Anti-racism protests also took place across France last week before the ban was lifted, in solidarity with the Black Lives Matter movement that has prompted protests and riots in the US, after the murder of unarmed black man George Floyd.

Similarly, police in France symbolically gathered and “threw down their handcuffs” in opposition to anti-racism and anti-police brutality measures announced by interior minister Christophe Castaner.

Several hundred police gathered to mark their discontent at the new government announcements.

Gatherings continued despite Mr Macron saying just hours earlier that police officers and gendarmerie “deserve the support of public powers and acknowledgement from the nation”.

He added: “Without Republican order, there is no safety and no freedom. This order [comes from] police and gendarmerie on the ground, who ensure it in our name.”

But one police officer, who wished to remain anonymous, told AFP: “We are not at all reassured by the speech tonight. We want something concrete, and we especially want the interior minister to retract [his statements].”

Another police officer added: “To be dropped by your boss is pretty terrible! We have the impression that the streets are king, and we feel completely abandoned.”
She said that she would continue to protest “every night if we need to”.