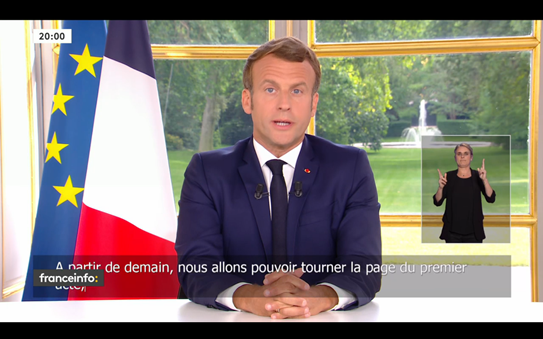 President Emmanuel Macron said that France had "scored its first victory" in the battle against the coronavirus pandemic as he announced a further relaxation of restrictions in Paris and across the country.

Here, we analyse the key components of his speech:

With the confinement France made a "humanist choice to place health above economics," Mr Macron said.

"We have nothing to be ashamed of. Tens of thousands of lives have been saved by our choices, by our actions.

"This time has shown that we were resilient (...) that we were capable of being inventive and solid. We can be proud of what has been done."

And he praised citizens who had accepted the strict lockdown regulations. Those efforts, he said, have allowed the country to reopen at a faster pace. "If we are in a position to reopen the country it's because, at every stage of the epidemic, everyone has done their part. (...) The state has stood solid.

"You showed an admirable sense of responsibility. And thanks to the exceptional commitment of our carers and all the teams, all the patients who needed care were able to be taken care of at the hospital or ... medical centre.

"Thanks to all those among you who continued to work, despite the anguish, to provide essential services to the nation. We were able to feed ourselves and continue."

In a speech that lasted about 20 minutes, he said: “Tomorrow, we will be able to turn the page on the first act of this epidemic.

"We will … be able to rediscover the pleasure of being together, of returning to work, but also of having fun and learning. We will rediscover part of our way of life, our taste for freedom. In short, we are going to rediscover France fully."

But he warned: "This does not mean that the virus has disappeared and that we can totally let our guard down.

"We will have to live with it for a long time to come, respect the rules of physical distancing. The summer of 2020 will not be a summer like any other, and we will have to keep an eye on the evolution of the epidemic to prepare ourselves in case it comes back with more force.

"We will have to live with the virus for a long time yet," he said.

Mr Macron said the government's economic measures during lockdown were proof of its total support for the country's businesses, 'whatever the cost' - pointing to the chômage partiel scheme, as well as business loans, support for traders, the self-employed and 'the most precarious'.

"We have decided on a massive plan for the hardest hit: the automobile industry, aeronautics, tourism, culture, catering, hotels.

"Everything has been done by the government to save our jobs and to help everyone."

Now, the President said, France was entering a new chapter where it needs to rebuild its economy along new lines.

“Our first priority is to reconstruct an economy that is strong, green and just,” Mr Macron said.

The priority for the next two years: "regain full control of our lives, our destiny in France and Europe."

"We have committed nearly €500bn for our economy (...) this is unprecedented, and I want you to take in the size of what we are talking about. In how many countries has this been done? This is an opportunity and it shows the strength of our state."

But Mr Macron specifically excluded any recourse to a tax increase to finance this intervention, and said he hoped to transform the country's economy.

"First of all, we must do everything to avoid redundancies as much as possible. That's why we've started negotiations with the unions and employers so that in all companies, we manage to preserve as many jobs as possible despite the downturn."

Commenting on what has not worked so well, notably the over-reliance on other continents, he said: "Our strengths, we'll build on them; our weaknesses, we'll correct them fast and hard.

"I want to open a new page for our country by giving freedoms and responsibilities to those closest to our lives, the universities, the hospitals, our entrepreneurs. (...) Let's unleash the creativity and energy of the field."

Speaking a day after thousands of people took to the streets in several French cities to protest against police violence and institutional racism in France, Mr Macron had to tread a fine line, recognising protesters' demands and denouncing racism, while trying to avoid aggravating police unions - who have already held their own demonstrations, including throwing down their handcuffs after chokeholds were banned.

"We will not build our future with an increase in disorder and without Republican order. (...) That order is the police and … They are exposed to daily risks on our behalf. That is why they deserve the support of the authorities and the recognition of the nation."

But he also sympathised with the protesters, and said action would be taken where necessary: "We are a nation where everyone, whatever their origins and religion, must find their place. Is this true for everyone at the moment? No.

"We will be tough on racism and anti-Semitism, and strong new measures for equal opportunities will be taken."

He warned, however, that vandalism and violence would not be tolerated. "This noble struggle is misguided when it turns into communitarianism, a hateful or false rewriting of the past. This fight is unacceptable when it is taken over by separatists.

"I make it very clear to you all tonight… the Republic will not erase any trace or name from its history. It will not forget any of its works. It will not unbolt a statue.

"Rather, we must look lucidly together at our entire history, all our memories, our relationship with Africa in particular, in order to build a present and a possible future on both sides of the Mediterranean, with a desire for truth and in no way to revisit or deny what we are."

You can see the full speech here: