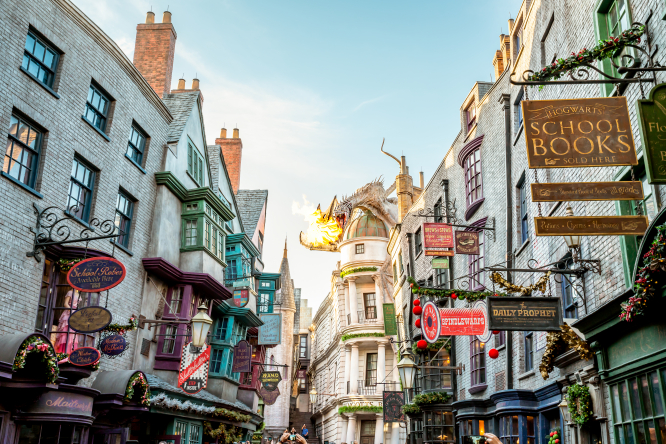 The sign directs pedestrians to ‘le Chemin de traverse’, known in English as Diagon Alley, a physical reproduction of which can be found in Orlando, Florida. Pic: MontenegroStock / Shutterstock

The Paris mairie has accidentally installed a real signpost referencing a fictional location in the Harry Potter books, after a fake look-alike signpost was installed by a group of street artists.

The artists adapted an existing signpost by attaching their own street sign, directing residents in the 19th arrondissement towards ‘le Chemin de traverse’, (the street known as ‘Diagon Alley’ in the original English-language version of the Harry Potter books).

The street is a fictional location imagined by author J.K. Rowling, and is one of the first magical places that the young Harry Potter encounters as he goes to buy his wand and wizarding textbooks.

Diagon Alley can only be accessed by tapping the correct brick in the wall behind the Leaky Cauldron pub, and is invisible to Muggles (non-magical people).

The replica sign ­was so convincing that the mairie believed it to be real, Le Figaro reports, and, as the sign became damaged, the town hall made plans to replace it in its entirety – including the prank sign at the top.

When the new sign was being installed on October 26, one onlooker struggled to hide his disbelief in a video posted to TikTok.

The TikTok video was shared online by many who oppose Mayor Anne Hidalgo, including regional counsellor, Pierre Liscia, along with the hashtag #SaccageParis (#VandalisingParis).

The mairie put the incident down to a “mistake from an official, who did their work well”.

It said that when an employee came across the damaged look-alike sign they believed “it was a sign directing people to a tourist site [and] took the initiative to raise the alert and replace the signpost”.

“This shows how responsive our officials are.”

While some on social media have criticised the new sign, others have called for it to be kept as a permanent addition to the 19th arrondissement.

The mairie has not confirmed future plans for the sign but said it “could” be left as it is.