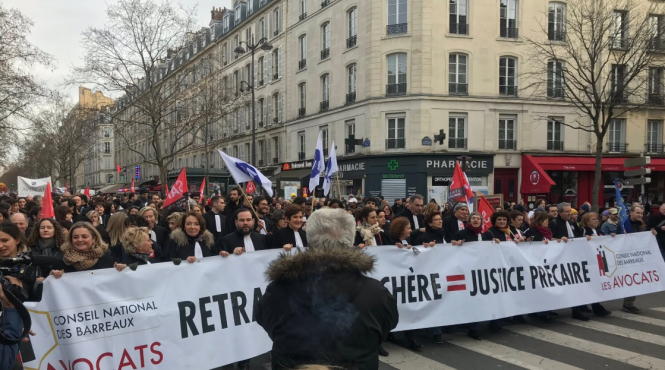 Almost 150,000 people came out to march against the proposed pension reforms this weekend, as the government announced a concession
By Connexion journalist

Prime Minister Edouard Philippe sent a letter to union heads, saying he would be “ready to concede” the minimum pension age of 64 (rather than 62), which is one of the most contested aspects of the proposed reforms.

The announcement came on the 38th consecutive day of action by unions against the plans, with an estimated 149,000 people - according to interior minister figures - coming out to march nationwide on Saturday January 11.

President Emmanuel Macron called the proposed concession a “constructive and responsible compromise”, as other members of the government also showed support for the measure.

Government spokesperson Sibeth Ndiaye said the letter from the Prime Minister was “a turning point”.

She said: “Everyone has made an effort, everyone has moved forward. The government has made the choice to withdraw the pivotal age of 64 for 2027, and reformist unions have accepted that we are not ruling out further evaluation of the financial balance of the universal system, in the short, medium, and long-term.

“For us, this is a much-anticipated step forward. The pivotal age of 64 was like a sword of Damocles for unions, which, according to them, blocked any peaceful dialogue to build an alternative. We have made a responsible choice to withdraw it, to give space to this social dialogue.”

Yet, only the CFDT, CFTC, Unsa and Medef unions welcomed the move, with other unions, including the CGT, rejecting it. In a press release, the CGT said it was “more determined than ever to achieve the withdrawal” of the reforms completely, while the Solidaires group called the move “a [manipulative] manoeuvre”.

Opposition unions have called for another official day of inter-profession strikes on January 16; the sixth such day since the strikes began on December 5.

Some members of opposition parties have also criticised the move. Damien Abad, president of Les Républicains in the Assemblée Nationale, published a video on Twitter, saying: “All of this for that! We would have had the longest ever strike for the smallest ever pension reform. We denounce this government U-turn and lack of courage.”

Today (Sunday December 12), on the 39th day of strikes, services on TGV, Transiliens, TER, and Intercités are showing a “considerable improvement”. More than 80% of TGV Inoui trains are running, as are 90% of Ouigo, Eurostar, and Thalys services.