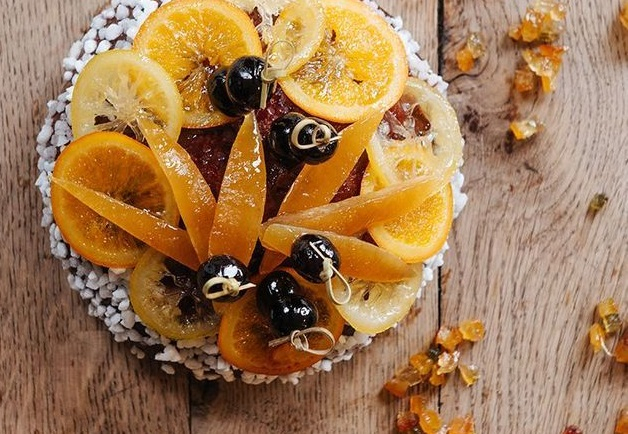 Depending on geography, and the creativity of the chef, the galette can be made with pastry or brioche, and any number of flavours
By Hannah Thompson

Bakers across France have been creating original takes on the traditional galette des rois patisserie, as the country officially marks the festival of Epiphany on January 6.

Epiphany is a Christian festival, which celebrates the arrival of the three kings - or “three wise men” - to Jesus. It is celebrated on the first Sunday of January, except if that day falls on January 1.

This year, it was therefore celebrated on Sunday January 3, but on certain calendars, the official date of the festival is January 6 (today).

In France, galettes - often with a coin or charm hidden inside to convey luck - are shared to celebrate the festival. Sometimes they are baked in a crown shape in honour of the kings, but they can vary significantly depending on location and the creativity of the baker.

Depending on geography the galette des rois may be made with slightly different ingredients and flavours.

While much of the country creates a pastry “galette” with frangipane - an almond-flavoured patisserie cream - in the south-east, the treat is instead usually made as a “brioche des rois”, with a large and fluffy brioche consistency and decorated with candied fruit.

Galettes of all sizes can usually be bought everywhere from local bakeries to supermarkets, and also made at home - but many professional bakers and patissiers compete each year to produce the most creative and delicious versions.

Here are some of our favourites this year.

This limited edition galette is in the shape of a cosy winter hat, with a pom pom made of almond cream. It also includes candied pieces of orange, grapefruit, and lemon, and is decorated with vanilla caramel.

Another unusually-shaped creation, this galette mixes pear and chestnut flavour, with a tonka charm, covered in layered brioche made with lemon zest.

This version combines the classic flavours of chocolate and pear in a distinctive chocolate sandwich structure, adding pecans for extra texture.

This treat by chef pâtissier Maxence Barbot is made with almond and vanilla frangipane, with caramelised layers. The first 100 to be made will also contain charms shaped like keys, created by Maison Bucherer, which will unlock access to more gifts.

Chef Cédric Grolet has made this galette using seasonal chestnuts in pride of place, with roast chestnut cream and pieces of candied chestnut inside.

The famous patisserie brand has created an original, fruity and playful design this year, with a stencil of bear wearing a crown, on top of a pistachio-flavoured galette with candied cherries and raspberries.

This galette is a very modern creation made by Julien Abourmad, head of cheekily-named French chef group The French Bastards - and Nicolas Lambert, chef pâtissier at the Four Seasons hotel in Saint Petersburg. The cake was created entirely “at a distance” with the two chefs collaborating remotely to produce this caramel and pecan creation.

This brioche-style treat is piled high with candied citrus fruit and cherries, flavoured with orange, and studded with sugar.

Another pillowy brioche made with orange, plus artisanal candied fruit from local confectioners Lilamand in Saint-Rémy de Provence.

This galette, called Aliénor, replaces the traditional pastry design with soft meringue, and is filled with almond cream, and fresh pears and raspberries too.

An original fusion of babka and galette, filled with frangipane, and featuring an intricate design studded with almonds and covered in acacia honey.

This impressive loop was created by Michael Bartocetti at the famous hotel as part of its “Christmas pop up”, and is made with Viennese-style puff pastry, with Cazette flower frangipane.

Lovers of honey look no further - this galette is filled with almond cream mixed with honey, is topped with candied orange and almonds, and has a honey-flavoured meringue too for a bright, unusual look.

This chocolate and almond "doughnut-shaped" creation also includes caramelised almonds, and uses a 40% milk chocolate to satisfy the sweetest tooth.

More good news for chocolate lovers - this galette is piled high with Madagascar chocolate, atop a pastry made with AOP Charentes butter, filled with almond and chocolate cream.

Founder Jean-François Bandet has created an homage to both Epiphany and France with his Hexagon-shaped bake filled with homemade almond and praline cream. The baker made the galette in honour of “the incredible work France has done to protect its most vulnerable” this year, he said.