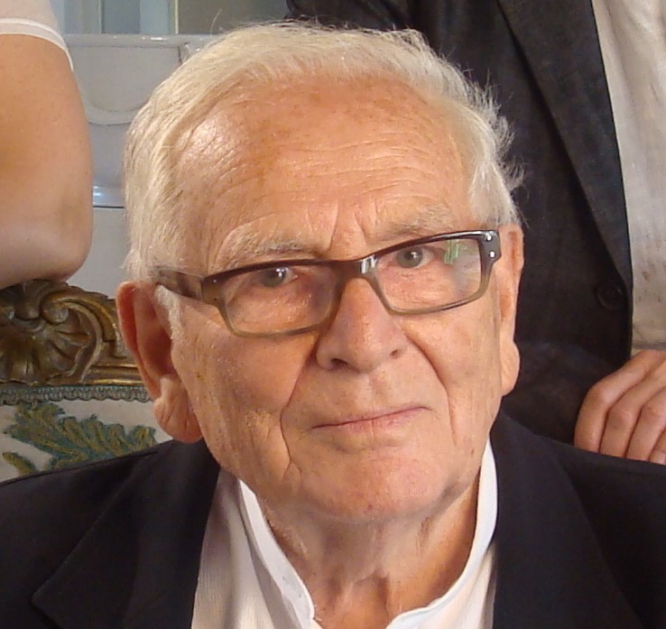 French fashion designer Pierre Cardin died at the age of 98 on December 29, 2020
By Sally Ann Voak

He was inspired by space travel, bought Maxim’s restaurant chain and the incredible Palais Bulles near Cannes, then created a world-wide fashion empire.

Pierre Cardin’s love of life, art and good design made him the most innovative and adventurous of the post-war Paris fashion designers.

He put space-age creations on the catwalk, dressed men in crazy knickerbockers, and even dared to do the unthinkable (at that time!), by marketing his creations, and his name, all over the world.

It was 1968 and the Beatles and Mary Quant had already taken London by storm. As a young fashion writer, keen to see exciting design at affordable prices in the high street, I found M Cardin’s attitude refreshing and much-needed. We all wanted to look good but certainly couldn’t afford couture prices. At just 26, after training on the mass market Woman magazine, I had somehow became Fashion Editor of the UK edition of Harper’s Bazaar.

I was a keen, chirpy Cockney, so my first stint at covering the Fashion Collections in my beloved Paris was a shock.

After free-living, free-thinking London, the rules and frequent rudeness seemed stuffy and outdated. The clothes were beautiful, but who could afford them?

The all-powerful Chambre Syndicale de la Haute Couture controlled everything, including the journalists’ seating arrangements. I had to settle gratefully for the third row as the first two were full of ancient (to me anyway), doyens of fashion journalism and American buyers. I also had to beg and borrow clothes from unhelpful vendeuses to photograph for my prestigious magazine during the night. “Non” was their favourite word.

Then Pierre Cardin sent shock waves through the whole set-up. Charismatic, with a lean, hungry, wolf-like look and Italian charm inherited from his parents (who fled Italy  to escape fascism, settling in France in 1924), he was always willing to chat to fans like me who surrounded him at the end of his amazing shows.

We especially loved the fabulous menswear. Ready-to-Wear clothes were always included, and his passion for reaching out to real people, not just the wealthy, was obvious.

He took risks and made mistakes, but his business acumen was incredible. He had already been expelled once by the Chambre in 1959 for launching a ready-to-wear collection for Printemps, the Paris department store. Then, In 1960, after being reinstated, he created  a system of licences that he could apply to fashion. For the first time, a designer’s logo could be displayed on garment.

He used this to market his own designs, expanding his business into cosmetics, fragrance, accessories, shirts, ties, even cars and furniture; he opened his first furniture shop in the Faubourg St. Honore, Paris in 1975.

In the UK his brand did incredibly well and inevitably attracted fashion thieves - even his signature was copied. You could pick up cheap “Cardin” clothes and accessories on Portobello Road.

One trend, “mod chic”, featuring shorts, plus ankle length skirts and geometric shapes, became popular with youngsters in London. One of my pals who was a “mod” at that time, scooter-mad, remembers feeling proud of the Cardin logo on her shorts.

Many men of a certain age will still have trendy patterned Cardin ties in their wardrobes, real or fake.

In the US, business journals were less than flattering, claiming that extensive licensing eroded the Cardin brand’s credibility. However, it brought in the dollars.

Even so, the fashion trade “bible”, Women’s Wear Daily,  said “Pierre Cardin – he has sold his name for toilet paper”. Not true, but he did market key chains and pants...

To me Cardin’s legacy will always be the way he opened up fashion, in all its forms, to the world.

Men’s wear and smart tailoring were greatly influenced by him and are now – when we are in normal times –  exciting and fun, and not just the realm of the rich.

Young designers were inspired by Cardin to try androgynous outfits, experiment with new fabrics and be upfront with their business ambitions.

These days big names market their lines, their names, their logos. Sir Paul Smith is a good UK example of someone who has done this without detracting from his image as a designer.

Quelle Vie! A life as exciting and varied as his designs

Born Pietro Costante Cardin in Treviso, Northern Italy, I922, he moved to France with his parents in 1924. Educated in central France, he left home in 1939 to work for a tailor in Vichy, worked for the Red Cross during WW2 and then moved to Paris in 1945.

His talent was quickly recognised and he worked with designer Elsa Schiaparelli before becoming head of Christian Dior’s atelier in 1947.

He launched his own fashion house in 1950 and became a huge success after designing costumes for a ball in Venice.

He travelled to Japan in 1959 and, already showing his business acumen, realised that it would become the high fashion market it proved to be when he began marketing his business worldwide.

In 1971, he launched his own Espace Cardin in Paris which promoted new artistic talents and his collections. Incredibly, he also bought Maxim’s restaurants in 1963 and licensed a range of food products under the name.

A long-time supporter of the arts, he partially renovated his castle in Lacoste, Vauclause, for music and dance festivals, and owned a palazzo in Venice. He identified primarily as gay but was reportedly involved romantically with the brilliant actress Jeanne Moreau for more than four years.

So, not a dull moment.