Macron: Semi-confinement to extend to all France, schools to close 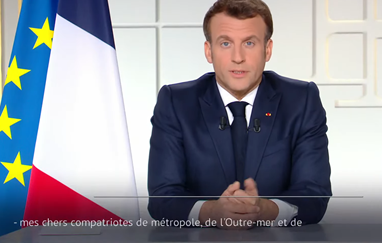 The President said the health situation in France was 'delicate' in his speech last night Pic:

The stricter ‘semi-confinement’ rules currently in place in 19 departments will be extended to all of France from the evening of Saturday, April 3 for four weeks, President Macron said tonight in a televised address to the nation.

Schools will also close for three weeks, part of which will be spent studying at home.

Mr Macron began his speech by speaking of "a year of pain, of hardship, where at least four and a half million have contracted the virus, and where soon 100,000 families will have been bereaved.”

"The virus is still circulating strongly… but we have managed not to have general confinement so far as some neighbours have," he added, saying, Germany is on its fourth confinement.

The president said the whole country would need to continue to make an effort especially in April, adding that if the country remains united and in solidarity “we’ll see the end of the tunnel”.

1: Extension of stricter rules to all of France.

Semi-confinement, also known as 'lockdown light', is already in place in 19 departments in France. The rules are less strict than during full confinement, but aim to limit social interactions and slow the spread of the virus:

2: Creches, primary schools, collèges and lycées will close for three weeks with classes being undertaken from home next week.

Mr Macron said: “France was among the first to reopen our schools, and they have stayed open since September. We are among the few countries to have made this choice.”

The situation in France

President Macron said an increase of vaccination gives hope to come out of the crisis… but new variants – especially the UK variant - are creating “an epidemic in the epidemic.”

He said younger people are falling seriously ill with Covid-19, especially those in their 60s and 50s and even younger - 44% of people in ICU are now aged less than 60.

"The stricter measures in 19 departments are showing signs of working but are not enough and we have to fix a new framework for the months ahead," Mr Macron said.

"We are in a delicate situation: Intensive care beds could be saturated if the right measures are not taken," he added.

New semi-confinement in France: What you can and cannot do
Covid-19: Border and variant updates for March 31
Macron defends Covid strategy as calls mount for total lockdown