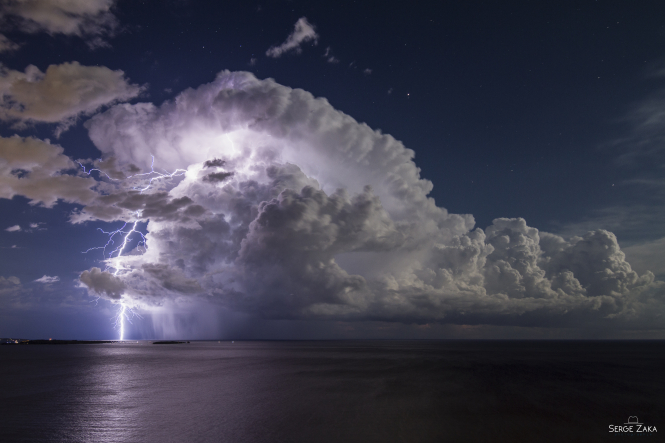 The photography took a 300km drive, an 8-hour wait and half a night spent sleeping in a car to capture it. Pic: Photo supplied by Serge Zaka

A thunderstorm over Cannes Bay has been voted the public’s favourite weather photo of 2021 - a shot which took French-Lebanese agrometeorologist Serge Zaka 16 years of storm chasing.

Lightning from an isolated storm over Cannes Bay was taken on August 4, 2020 in Théoule-sur-Mer, facing Cannes, in southern France.

It took a 300km drive, an 8-hour wait and half a night spent sleeping in a car to capture it.

Several rare elements fell in place to create the shot, namely a full moon, an isolated storm, a rare type of lightning that strikes outside of the storm and is not masked by the rain, and the location - above the sea and under the stars of Cannes.

The Royal Meteorological Society’s Weather Photographer of the Year competition, in association with AccuWeather, is considered to be the most prestigious weather photography competition in the world. This year’s winning photographs were chosen from approximately 9,000 entries.

Dr Zaka’s photo was voted the public’s favourite and the judges’ second runner-up.

He told The Connexion:  “I was very moved, I did shed a tear. I’ve been taking photos for 16 years - in the rain, in the cold. I felt a great acknowledgement for my work, both the work I do every day with regards to climate change and as a photographer.”

Weather photography is Dr Zaka’s night-time passion. By day, he works for agri-intelligence company ITK, where he studies the impact of the climate on agriculture.

By night, he travels within a 300km radius of his home in Montpellier to capture storms, between 2-3 times a week and once a month, depending on the time of year.

The 32-year-old storm-chaser has always been interested in meteorology but he says the real catalyst was Cyclone Martine, a brutal windstorm which traversed southern Europe in December 1999, when he was 10 years old:

“I wanted to understand why major destruction like that could happen, how this event happened and why we hadn’t anticipated it.”

He became an agricultural engineer at age 22 and obtained a doctorate in agroclimatology at the age of 26.

Besides research, Dr Zaka’s goal is to educate others. He explains,

“That photo is just a piece of the puzzle... I still have a lot to show with regards to meteorology and climate change. I will continue working and talking about it until the politicians and the greater public realise how much work really needs to be done.”

New statue in place for underwater sculpture gallery in Marseille