New statue in place for underwater sculpture gallery in Marseille 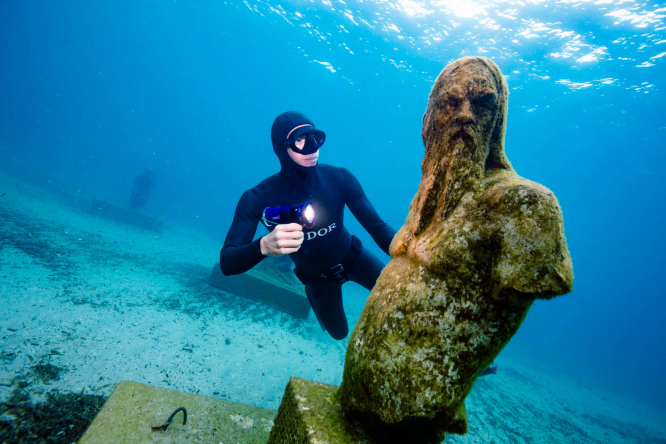 While serving as a novel tourist attraction, the installations will also be studied closely by scientists Pic: Courtesy of Wallis

The ninth of 10 sculptures for an underwater museum off the coast of Marseille has been installed, with the final exhibit due in September.

The attraction is situated 100m off the Plage des Catalans at a depth of five metres and was inspired by the work of British sculptor Jason deCaires Taylor.

Musée Subaquatique’s founder Antony Lacanaud said: “Anyone can swim out and visit for free, although you enjoy it most if you have a mask and snorkel.

“We opened last October after a four-year wait for the French administration to give us clearance, including having an association take us to the highest court in the land.”

The association accused the prefect who signed papers authorising the museum of abusing his powers, insisting the concrete used for the sculptures might damage the environment.

“But they even got the sort of cement used wrong in the papers. We use marine cement which is effectively mineral and does not contain pollutants, although, like all cement and concrete, a lot of energy is used to make it,” said Mr Lacanaud. “We are recovering our ecological footprint through teaching people about the sea.”

The museum is in an area where power boats are banned, and the sculptures are being examined by scientists at regular intervals to see what sort of underwater plants and animals colonise them.

In addition, the ninth sculpture, called Résilience by its maker Thierry Trivès, is equipped with a camera and other electronic sensors to monitor water temperature, clarity and force of currents.

They were tested for a week before being removed for improvements, and are due to be replaced in September.

“In the eight months the sculptures have been underwater, we have already noticed some plants and animals on them. Some people say they look unloved and should be cleaned, but part of the project is to leave them there and see what colonises them.”

The museum has links with research institutes and arranges school visits to the site.

“One of our main goals is to raise awareness of environmental issues involving the seas and oceans, and this is a good way of doing it,” said Mr Lacanaud.

Mr deCaires Taylor, who left the Marseille project when paperwork delays stalled progress to concentrate on a similar initiative in Cannes, has been frustrated by obstacles there too.

The Cannes project opened after the Marseille one.

The authorisation for the museum is for 15 years.

“We will monitor it during that period and if it is seen to be doing harm to the environment, we will lift it up,” said Mr Lacanaud.

“But my hope is that the opposite will happen and after 15 years we will see that it has had a positive effect, and the authorisation can be extended.”