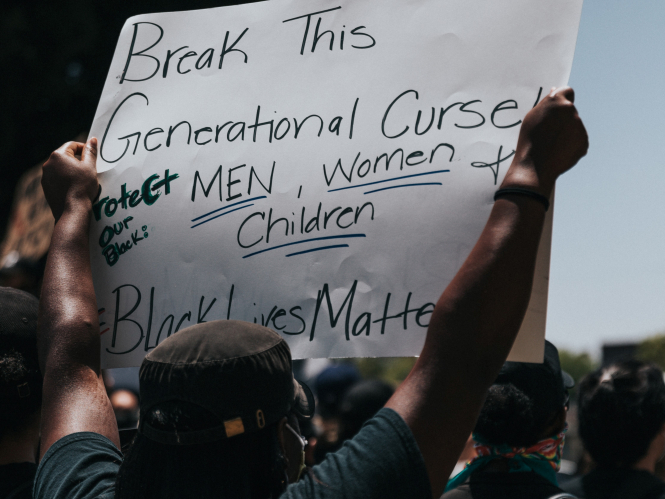 The use of 'black' and 'noir' in France, explained. Pictured: anti-racism protesters campaigning for a fairer future. Sign reads: 'Break this generational curse! Protect our Black men, women and children. Black Lives Matter.'
By Connexion Journalist

Origins of 'black' in France

Ileyna, 18, interviewed by FranceInfo, said: “I’ve told my friends I don’t like people saying black about me. I prefer noir. We’re proud to be who we are, it doesn’t bother me to use the usual French word”. The use of black in French started in the 1980s, used originally by anti-racist protesters inspired by American black pride movements, according to historian of colonialism Nicolas Bancel. It was also linked in the 1980s and 1990s to US urban culture, such as hip-hop and rap.

Linguistics researcher Marie Treps says it caught on among ordinary French people who felt the word noir was linked to colonialism and that the anglicism helped to tone down the reference to skin colour when used in French.

Criminologist: "racism and brutality not on the rise with French police, it’s we who have changed"

There was a nervousness that it might be racist to refer to people directly as noir, as opposed to using euphemisms such as gens de couleur, so it was better to say it in English instead. It is almost as if you are “putting quote marks around it, with a touch of humour”, to say black instead, according to sociologist Eric Fassin.

Since the early 2000s, however, there has been a backlash against it from black people, especially since the creation in 2005 of the Conseil repré­sentatif des associations noires de France (Cran), a rights body with the straightforward noir in its name, and the publication of a documentary and book called Noirs de France and La France Noire.

Director Amandine Gay, in a podcast called Noir, pas black, said: “If you say black instead of noir, it just shows you’re uncomfortable about issues of race.” In a 2012 Slate article, Le Monde’s chief sub-editor Lucien Jedwab gave the view that it was acceptable for actors and singers, but sounded patronising for more heavyweight contexts. “You can’t write that Barack Obama is un president black. It doesn’t sound very serious,” he said.