Storm Alex: Rebuilding goes on one year after valley floods near Nice 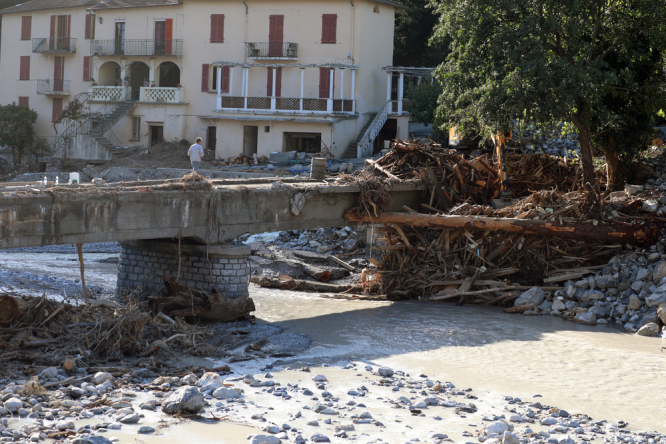 The village of Breil-Sur-Roya in the Roya valley (Alpes-Maritimes) was heavily damaged by flooding caused by Storm Alex in October 2020 Pic: Sibuet Benjamin / Shutterstock

This weekend marks one year since Storm Alex led to devastating floods in the southeast of France, resulting in 18 people dying, eight of whom were never found.

The floods also caused huge damage to buildings and the landscape in the Roya, Vésubie and Tinée valleys north of the city of Nice.

In Saint-Martin-Vésubie, many buildings still bear the scars.

"We have 91 houses completely destroyed, and 67 now on the edge of the cliff or partially destroyed," the mayor, Ivan Mottet, told France Bleu.

Several roads and bridges around the village have been rebuilt in the past year to allow vehicles to gain access to certain areas, and hiking trails are gradually becoming passable.

Many of Saint-Martin-Vésubie’s residents are eligible for state compensation for the damage to their property through the Barnier fund (Fonds barnier), set up to help victims of natural disasters.

"The authorities have to evaluate the property, and the assessments are long. Some inhabitants have received initial compensation from their insurance, and this will be supplemented by the Barnier fund,” he said.

Insurance companies have paid out an estimated €217million in the Alpes-Maritimes region due to storm-related damage. The government meanwhile has invested €572million in reconstruction projects.

The priority of authorities and residents is to reinforce river banks, with banks around two tributaries of the Vésubie river being built up in order to avoid further damage in the event of future flooding.

Meanwhile, the riverbed has been increased from 10 metres to 90 metres. An area of 100 metres wide will be set aside and the mayor plans to create car parks, mountain bike trails and a football stadium.

Mr Mottet said that before any construction project, "there will be very thorough geological studies".

While about 100 people have left the village since Storm Alex hit, others have chosen to stay: There are 72 pupils at the local school, the same as before the storm.

In the nearby village of Tende, about 50 children have returned, while 20 have not.

The Roya valley was also greatly impacted by the storm. 110 houses remain standing, but they cannot be accessed as it is still too dangerous.

Here too, the priority is infrastructure. The old departmental road has to be rebuilt and made more durable so that it can withstand any future floods.

New tunnels will also be built, which will take another four or five years.

One such tunnel, being built in Tende, will link France and Italy, and will be completed by October 2023. It will cost a total of €255million, €76million more than initially planned due to the storm.

The village of Casterino, also affected by the flooding, is still only accessible on foot or off-road vehicles.

There were four hotels in the small picturesque village, but one of them has closed and the others are in a very difficult situation. Some residents there chose to remain over last winter and were cut off from the outside world for several months.

In better news for the residents, French actor Jean Dujardin visited the hamlet back in September as part of work for a new film. He stayed at the hotel-restaurant Les Mélèzes, to the delight of the owners.

Several remembrance ceremonies are planned for this weekend, as listed by France 3, which provides an interactive map on its website.

For Mr Mottet, there is a lingering concern that a future storm could strike and again cause devastation in the region.

"Tomorrow, it may rain again in the same proportions in the same place and we must be prepared for this," he said.