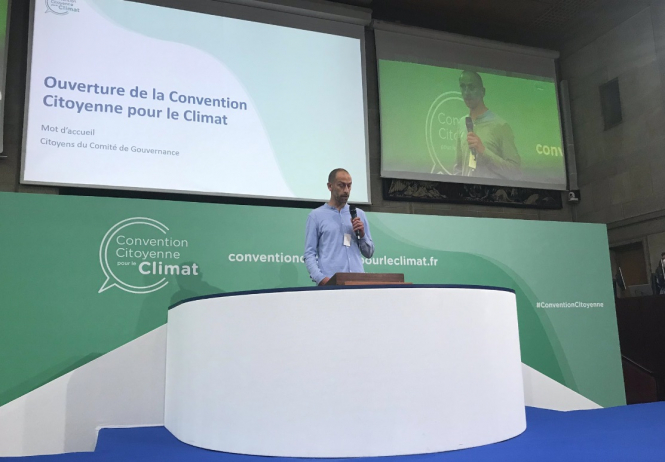 The final session of the Convention began today (Friday June 19), including 150 members of the public and keynote speakers
By Connexion journalist

After nine months of work, the Convention will meet today (Friday June 19) for a final weekend during which it will vote on proposals intended to help combat climate change.

Those that are voted through will be sent to President Emmanuel Macron on Sunday June 21 for a final decision from the government.

The Convention comes after President Macron requested that a randomly-selected group of members of the public should “define a series of measures to combat climate change, allowing us to drop emissions by at least 40% by 2030 (compared to 1990 levels), in the spirit of social justice”.

The measures will then be submitted “without a filter” to Parliament, or may even be put to a referendum.

In January, Mr Macron said: “I pledge that major decisions will be made.”

The voting process - which will include recommendations on whether to hold a referendum, and how to finance the proposals - will be reported online on the Convention website.

The chosen proposals will be put online on Sunday night.

The possible proposals include:

These are set to ensure that “the fight against climate change is an objective of the Republic”.

The proposals include articles stating: “Rights and freedoms must not compromise the preservation of the environment [which is] the common heritage of humanity.”

The Convention has stated that “homes and construction together participate, directly or indirectly, to two thirds of greenhouse gas emissions and greenhouse gases in France”.

It has proposed measures including requiring all homes to use renewable energy by 2040, in both old and new buildings, and offer financial support to lower-income households that need help to make the switch. Construction workers should also be trained in eco-friendly methods.

The amount of energy used by construction should be limited, and homeowners should also be encouraged to limit their use of energy and fuel. Heating and air conditioning should be limited to 19°C and 30°C respectively (although this would not apply to care homes, hospitals or childcare facilities).

The proposals also suggest restricting the amount of space that can be given over to artificial floor or groundwork, and limits on how far buildings can spread in a town.

Food represents 24% of the carbon footprint of households in France.

Proposals to help this include reducing consumption of meat and dairy by 20% by 2030, and increasing our consumption of plants - including fruit, vegetables, and grains.

The agriculture sector should also work to use fewer pesticides and reduce its gas emissions by 2040, which currently represent 36% of emissions in France.

Phyto-pharmaceutical products such as toxic pesticides should be reduced by 50% by 2025, and the most dangerous should be banned by 2035.

Other proposals include adding warnings to food product packaging on products that are especially damaging to the environment, just as cigarette packets feature prominent health warnings, such as “smoking kills”.

These could include labels with phrases such as “this product damages your health and the environment” or “this product contains palm oil, which contributes to deforestation”, along with photos of natural disasters and the “consequences of global warming”.

The Convention has also suggested introducing a new crime, dubbed “ecocide”. This would be characterised as “any action which has caused serious ecological damage by contributing to the obvious and significant overstepping of planetary limits, committed with knowledge of the consequences which would result from it”.

The Convention has stated that “over-consumption has a significant impact on the environment”, and said that the public must stop consuming so much as a means to “use fewer natural resources and generate fewer greenhouse gases”.

All products and services should feature a carbon “score” on their labels - which show how environmentally-friendly they are - which is similar to the “Nutriscore” label featured on some food products.

Another proposal includes limiting advertising for products that are especially damaging to the environment, and introducing regulation on the sector - just as alcohol advertising is tightly-regulated, and adverts for cigarettes are banned.

In the same way as alcohol advertising must warn consumers to “drink responsibly”, environmental warnings could include wording such as: “Do you really need this? Over-consumption damages the planet.”

The Convention has also recommended that excess packaging be reduced, and has suggested the reintroduction of systems that would allow shoppers to return empty glass bottles or jars, or buy things in their own containers, rather than relying on supermarket packaging or plastic bags.

Transport is one of the most significant industries tackled by the Convention, but also one of the most sensitive (given that raising fuel prices was partly responsible for the gilets jaunes crisis last year).

Currently it accounts for 31% of greenhouse gases in France. Of this, 52% comes from cars, 19% from heavy goods vehicles, and 4% from domestic flights.

The Convention said: “It is crucial that we act to change our behaviour, individually and collectively.”

Proposals suggested include a drop in solo use of vehicles, and reducing reliance on individual cars.

Public transport should receive greater investment, to encourage people to use their cars less, and grants to help people buy and maintain bikes should be increased by €200 million per year.

Speed limits on motorways should be reduced to 100 kph, and the tax on train tickets should be dropped to 5.5% from the current 10%.

Heavy goods traffic should also be reduced, and there should be incentives for companies to replace high petrol-use vehicles with cleaner alternatives. This also applies to ships with polluting motors in major ports.

People who drive eco-friendly cars should be rewarded financially, the Convention has suggested, while people with very polluting cars should be penalised. There should be zero-interest government loans available for people who wish to replace their old cars with new, cleaner vehicles.

Read more: Where you need to have a Crit'Air sticker in France

The air transport industry should also be regulated, the Convention said. It proposes that by 2025, domestic flights for journeys that can be completed by another means of public transport should be banned.

There should be a ban on constructing new airports or runways, and airports and airlines should be required to pay a contribution per kilometre flown - which could see prices on tickets rise from between €30-€1,200, depending on the plane, the class of travel, and the journey distance.

The Convention has said that many industries will have to adapt their processes to become more eco-friendly, but that this must be done “with help and adapted solutions” to ensure that staff and workers do not suffer in the transition.

Enterprise must “transform its production methods” including developing new processes to reduce waste, to recycle, and further innovative procedures that use more eco-friendly materials.

Hours may be reduced to allow fewer materials and fuel to be used, without workers being paid less, the Convention said, especially for workers on minimum wage (Smic) and/or paid by the hour.

Companies will also be required to contribute financially to the ecological transition, depending on their size, annual revenue and dividends.

Similarly, all single-use plastic must be banned by 2023.

Businesses should also be encouraged to track and improve their carbon emissions, and to “protect ecosystems and biodiversity” with sanctions for those which don't.

A carbon tax should also be imposed for goods coming into the EU.