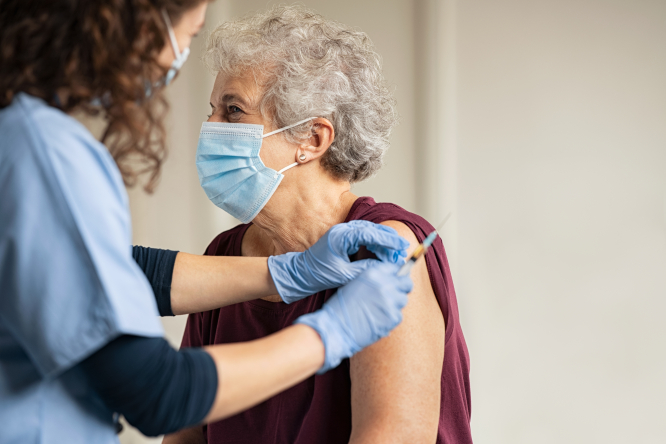 Over-65s and people with health conditions making them more vulnerable to serious illness with Covid-19 will soon be invited to have a third booster vaccine dose alongside their flu jabs. Pic: Rido / Shutterstock

People aged over 65 and those with health conditions making them more vulnerable to serious forms of Covid will soon be invited for a third vaccine dose, France’s health service quality regulator HAS confirmed today.

This booster dose is to be administered at least six months after the second, and will begin to be rolled out to eligible groups alongside this year’s flu vaccine at the end of October.

People who are classed as being at higher risk of serious illness include those with respiratory conditions, diabetics, and transplant and cancer patients.

Those who do not belong to the two priority groups confirmed by the Haute Autorité de Santé (HAS) will not yet be offered a third vaccine dose, although the booster option will most likely extend to more people in the coming months.

HAS will continue to monitor the data surrounding these less immediately vulnerable sections of the population, and further advice will be issued in due course.

Eligible people who have been vaccinated with the single-dose Janssen vaccine will also be invited for a booster dose or Pfizer or Moderna, received at least four weeks after the first injection.

“The data we have at our disposal does not allow us to confirm that one dose of the Janssen vaccine can offer long term protection against the Delta variant,” HAS said.

HAS also cited recent – as yet inconclusive – studies as suggesting that all of the existing vaccines become less effective at preventing infection over time, especially in the case of the Delta variant.

A gradual – and only slight – reduction in effectiveness has also been observed in the vaccine’s ability to fight serious illness.

France's decision to go ahead with booster jabs comes despite criticisms from the World Health Organisation, which says they are unnecessary and that it is "unethical" for wealthy countries to give third jabs while many in other countries are still waiting for their first.

France is currently in the midst of a fourth wave of Covid as a result of the rapid spread of the Delta variant.

Health Secretary Olivier Véran suggested in an interview on BFMTV yesterday that the peak of intensive care patients would be reached within the next few days.

“We might then see a stabilisation in the number of intensive care admissions and discharges, meaning that we will avoid an overburdening of hospital capacity and can then expect a decline in numbers,” he said.

Over the next few weeks, HAS has said that anyone eligible who has not yet been vaccinated should prioritise arranging their first dose, especially if they are aged 80 or over.

French biotech firm Valneva has yesterday launched a rolling submission for initial approval of its Covid-19 vaccine by the U.K.'s Medicines and Healthcare products Regulatory Agency.

Depending on the results of its phase three trials, the vaccine could be granted approval by the end of the year. Phase three refers to a vaccine being given to a large number of people to test for efficacy and safety.

Early trials already completed suggest that it could offer “more than 80% protection,” against the virus, according to Valneva’s director general, Franck Grimaud.