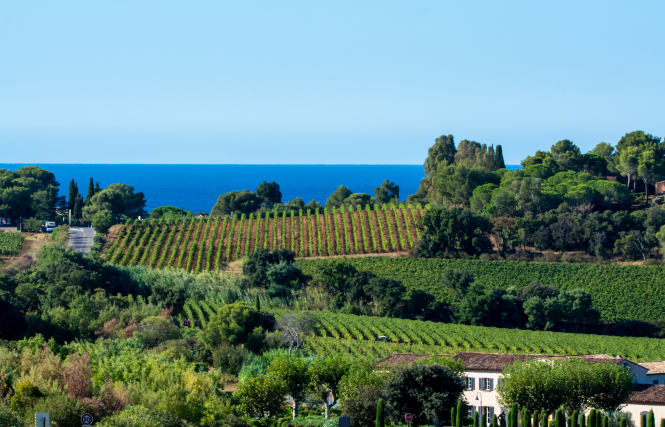 The Agriculture Ministry forecast that the French wine harvest would be down 24-30% this year Pic: barmalini / Shutterstock

Vineyards in the heart of the French rosé growing area were damaged by the recent Var fire, however the extent of harm to the grape harvest cannot yet be assessed, say experts.

In August the Agriculture Ministry forecast that the French wine harvest would be down by up to 30%, citing late frosts in many regions, and a wet July which caused mildew attacks, except in the south, which suffered from drought.

Since then a fire in the Var was widely reported internationally – including images of some vineyards full of scorched vines, leading to several reports of concerns over the possible additional impact of the fire on the harvest in the area this year. The Var is a key growing area for Provençal rosé.

However only a relatively small part of the Provence vineyards was impacted, said Brice Eymard, director of the Conseil Interprofessionnel des Vins de Provence (CIVP), which represents Provence wine growers.

Around 30 wine growers, out of some 600 in Provence, saw part of their vineyards damaged by heat, smoke or fire retardant during the fire, says CIPV.

“It was a terrible fire and covered a large area, but it mainly burnt in woods and forested areas, not vineyards,” Mr Eymard said.

“Of course for the people affected it is terrible and we are doing what we can to help them.  But in the overall scheme of things it will probably not affect the supply of rosé next year – although we will only know how much wine is made at the end of the harvest at the start of October.”

Colleague Cédric Skrzypczak added: “It varies a lot: In some cases there were whole rows of vines that burned, in other cases parts of the vineyard weren’t completely burned but had their grapes damaged. In other cases fire retardant was sprayed on the vines, and those also will not be usable.

“So vineyards were damaged to different degrees. It will be when the grapes are harvested and the winemaking process starts that the growers will be able to see if the grapes are usable or if for example they taste of smoke and need to be thrown away.”

Mr Eymard said the frosts, and the drought in the area in the summer means that the amount of wine made in 2021 is likely to be smaller than in recent years but Provence is unlikely to see as significant a drop as some other parts of France will have.

“However it is too soon to be certain, we have only just started harvesting and the harvest is likely to continue this year right into the start of October, and only then will we have final numbers for the hectolitres of wine produced.”

He said most wine growers in the region, which runs from Marseille to the Italian border, have kept back between 10% and 15% of their stocks from last year, when sales were hit by the Covid epidemic closing restaurants. This will be fed into the market to compensate for the smaller harvest.

“We do not normally keep reserves like this, but it is a lesson which we will take into the future, when it is likely we will see more extreme climate events,” said Mr Eymard.

Most French rosé comes from Provence and the wine has been one of the success stories in French winemaking in the last decade. Last year saw record exports, in spite of taxes on French wine imposed by then president Donald Trump.

The pink wine used to be mostly confined to the French, Belgian and Swiss markets, before improvements in winemaking and determined marketing campaigns saw its popularity soar.

With the vendanges (grape harvest) in Provence now underway, many of the vineyards start work at 1.00am in the morning, when the grapes have started to cool from their afternoons in the sun, and the wine is likely to be fermented in temperature-controlled tanks,  usually make of stainless steel and with a system of water running down the sides to keep the fermenting juice cool.

This results in wines which are fruitier to taste and likely to have more complexity than rosés of the past.

Mr Eymard said it is likely that most of the individual vines affected by the heat will not have to be dug up.

“They lost their leaves and fruiting stems but have deep roots and will probably regrow next year.

Rosé wine is also made in other areas of France, including the area from Marseille to the Spanish border, in Bordeaux and the south-west and the Loire valley.

Worst wine harvest for 45 years predicted due to bad weather

Cigarette was likely cause of Var wildfire

23 hours ago
4
Map: in which French departments are Covid cases rising?

15 hours ago
5
Which supermarkets in France have the most offers, deals and promos?