Toussaint: Its origins and why chrysanthemums are on sale in France 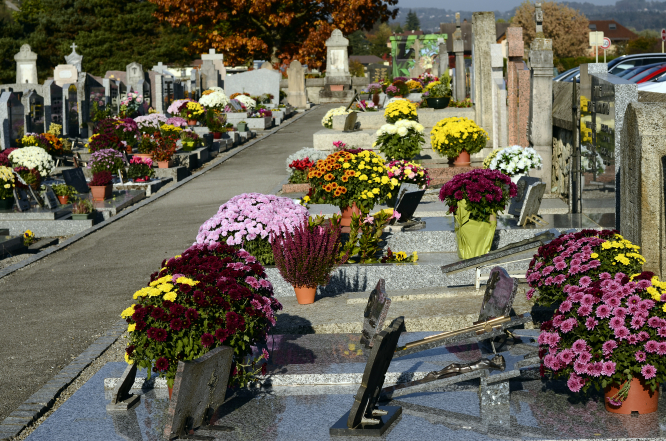 People in France may decorate the graves of their loved ones over the Toussaint weekend, for All Souls Day, which takes place the day after on November 2 Pic: Fullempty / Shutterstock

November 1 is a bank holiday in France, with many people set to have the day off work. It is one of the 11 ‘bank holidays’ on the calendar. We explain its origins.

What does November 1 mark?

It is the Catholic holiday of Toussaint. As the name (All Saints’ Day in English) suggests, this is a religious festival on which all Christians are invited to celebrate ‘all saints’, known and unknown.

The website of the Catholic church of France states: “Every November 1, the Church honours the countless numbers of those who have been living and shining witnesses of Christ.”

What are the origins of Toussaint?

As for many Christian festivals, its origins go back hundreds, or even thousands, of years.

While the festival is not referred to in the Bible, it is thought that it was introduced by the church, when in the year 610, Pope Boniface IV decided to introduce a regular commemoration of saints on May 13.

It would take almost another century until November 1 would become established as the regular annual date for the festival, after Pope Gregory III officially changed it.

Around the year 835, Pope Gregory VI decreed that the festival should take place all over the world, and the holiday is still celebrated in many Christian countries worldwide.

But it would take almost 1,000 years for All Saints’ Day to become one of eight official festivals on the Christian calendar. It did so in the 20th century, when Pope Pius X was in The Vatican. At the same time, it became a national holiday, with workers being granted the day off.

The festival was suspended during the French Revolution, before being reinstated in 1802 by Napoleon.

What rituals take place in the celebration?

Apart from having the day off work, many religious people in France will go to church to take part in celebratory services.

And the day after, November 2, is a day to honour the dead (All Souls’ Day, or Commémoration des fidèles défunts). As a result, people in France (whether religious or not) may go to decorate the graves of their loved ones with flowers over the Toussaint weekend.

The most common flowers and plants for this are heather, chrysanthemums, or wreaths.

Weather outlook not so good

Unfortunately, this weekend’s weather is not looking as celebratory.

A ‘Mediterranean episode’, bringing heavy rain, has been forecast for the south-east of the country over the Toussaint weekend, from October 29 to November 1.

Rain is also expected in Brittany from tonight (October 28), with strong wind of up to 170km/h expected in the north of the country, as more rain hits the south.