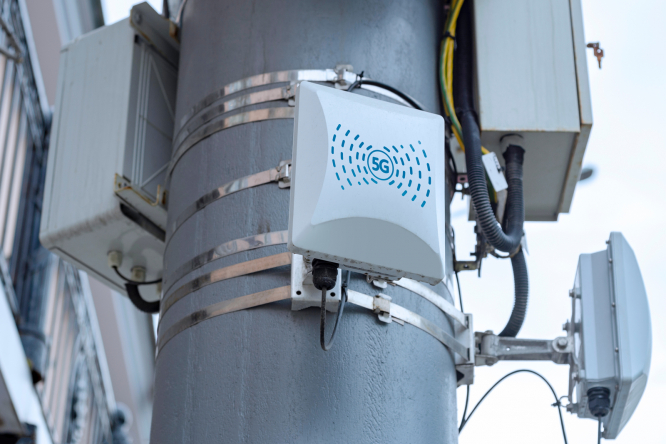 There are now over 28,000 5G sites across France, of which around 18,000 are technically operable Pic: Lisic / Shutterstock

Two Catholic monks were arrested last week for setting fire to a pylon in an attack on a 5G antenna in a village in the department of Rhône, near Lyon.

The monks, aged 39 and 40, attacked one antenna in Saint-Forgeux on September 14, and were arrested the following night by gendarmes when attempting to set fire to another antenna in the nearby village of Ancy.

There was minimal damage to the 5G antenna in Saint-Forgeux.

The men admitted to the crime, telling a local prosecutor that they acted to “protect the population from the harmful effects of 5G”, AFP reported.

The pair have been placed under judicial supervision for "destruction and attempted destruction by incendiary means".

A spokesperson for the monks’ convent said that it was “an isolated act and a youthful mistake,” local newspaper Le Progrès reported.

“The waves are very harmful to health and they wanted to act for the well-being of humanity,” she said.

An April report by France’s national health and safety agency Anses stated after an investigation that 5G technology presents “no new health risks”.

France is rolling out 5G on a maximum 3.5 GHz frequency band, and is also using the bands between 700 MHz and 2,1 GHz. These frequency bands have been used for existing technologies, such as 2G, 3G and 4G.

The Anses report stated that there was no current evidence to suggest these frequency bands had any effect on health.

5G can also be rolled out on a 26GHz frequency band.

Anses stated in the same report that there was insufficient scientific data to analyse the health effects at this frequency range.

There are now around 28,000 5G sites in France, which marks a rapid rollout of the technology. It took four years for the rollout of 4G, launched in 2012 to attain this level of coverage.

Of these 28,000 sites, just under 18,000 have been declared “technically operable” by France’s four major mobile operators: Bouygues Telecom, Free Mobile, Orange and SFR.

Almost all of these 5G sites have been built in places already equipped with 2G, 3G or 4G technologies. Only three sites are hosting 5G only.

In August, the number of authorised 5G sites increased by 2.8%.

France’s digital minister Cédric O has said that the rapid rollout of 5G will be beneficial for France’s rural communities, Le Figaro reported.

“5G is being deployed better and faster than expected. This is in no way to the detriment of our 4G and fibre deployment policy in France. On the contrary. 5G should arrive as early as this year in rural areas. It is a tool for regional development,” he said.

Free Mobile has set up the most 5G sites, at over 10,000. Bouygues Telecom has the second most, at around 3,000, while Orange and SFR have just under 2,000 each, France’s telecommunications regulatory agency Arcep states.

You can chart the 5G deployment in your region of France on Arcep’s website here. Scroll down to the bottom of the page until you see the section ‘Le déploiement de la 5G par région’, and click on your region.

96% of France now covered by at least one 4G operator