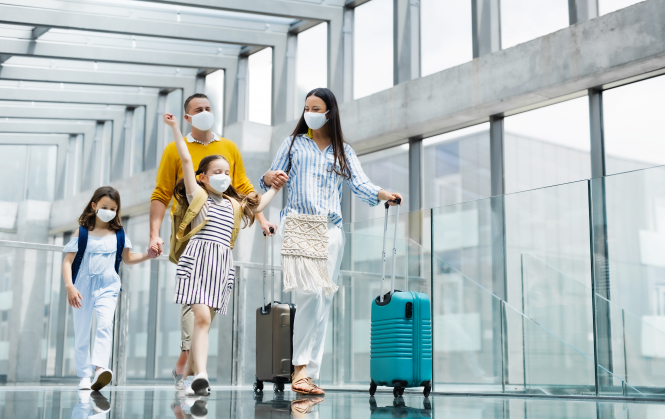 The UK’s Covid traffic light travel system needs to be more transparent so that people can have confidence when they book holidays, said Mr Charles.

From today (August 2) changes which see restrictions eased for most European destinations – with France an exception - are now officially in place.

While most of Europe can be visited by UK residents who are fully vaccinated without them having to quarantine in the UK when they return from their holiday, visitors to France must still quarantine at home for 10 days on return, and take two Covid 19 tests, one on the second day, and another on the eighth day. The authorities make regular randomly selected checks to ensure these rules are followed.

The UK government no longer advises against travelling to countries on its 'amber' list for non-essential reasons like tourism or stays in second homes. However France’s unique “amber plus” status caused a diplomatic flurry last week, with the French government accusing the UK of discrimination.

The UK claimed that the high number of the beta variant of Covid in France justified the move. Despite being mainly high outside of ‘mainland’ France (Ile de la Reunion in the Indian Ocean), some clusters have been detected in the north of France.

The beta variant is thought to get around vaccinated people's immunity easier than other Covid variants with The Telegraph reporting that sources have said UK ministers and officials are alarmed at the prospect of the variant being reseeded in the UK this summer, as it is believed to be more resistant to vaccines than several other strains.

Chief executive of The PC Agency, Paul Charles described the travel light system as “a complete mess.” His firm is a consultancy, specialising in advertising and brand building for tourist industry companies.

“No-one apart from ministers seems to have confidence in how red, amber, or green countries are chosen. The data is opaque, the explanations lacking.”

He said people in the travel industry found consumers were confused, because even travel experts could not explain the “bizarre and often panicked decision-making by the government.”

Mr Charles said he would like to see the system scrapped for fully vaccinated people, so they can make a decision on whether to travel or not on their own personal evaluations of risk. And if that is not possible, he said a simple go or do not go system would bring clarity.

Some British MPs, including members of the Conservative party, have also criticised the current system, saying UK residents need to be sure that they can book to travel, without having the rules changed while they are abroad.

The chief executive of Airlines UK, Tim Alderslade, said on the UK’s Times Radio today (August 2) that there had been a 300% increase in bookings due to the changes coming into force today. Airlines UK is the trade body for UK registered airlines.

But he also pointed to the problems caused by the French situation:

“Because of the way the government has looked at things over the past couple of weeks, with the France decision - a total disaster in terms of consumer confidence - people now think that with amber, there is a good chance that whether there is a watch list or not, they might be stranded, and that is a real dampener in terms of bookings.”

Reviews of the UK’s traffic light travel restrictions take place every three weeks, with the last update from the Transport Secretary Grant Shapps being on July 14. The next update is expected to be later this week, either Wednesday (August 4) or Thursday (August 5).

15 hours ago
3
Has reducing the French speed limit to 80km/h saved lives?

Orange promises 24-hour solution to fixed line faults in France
21 September 2021
More from French news
More from Connexion
Get news, views and information from France
Join the newsletter
Subscribe to The Connexion