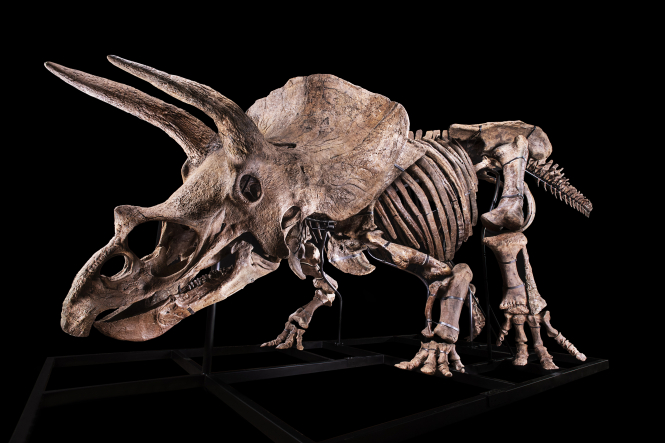 The skeleton is expected to be transported back across the Atlantic to the US Pic: Courtesy of Binoche et Giquello

The fossilised remains of the world’s largest known triceratops dinosaur, nicknamed Big John, sold for €6.65million at auction yesterday (October 21), far above the expected price of up to €1.5million.

The 66-million-year-old remains of the triceratops - the name means ‘three-horned face’ - were bought by an anonymous private collector from the US at Drouot auction house in Paris. The price includes fees.

The buyer-collector is ‘absolutely thrilled with the idea of being able to bring a piece like this to his personal use,’ Djuan Rivers, a representative of the buyer told Reuters news agency.

Big John’s skeleton was discovered in what is now South Dakota state in the US in 2014 by geologist Walter W. Stein. The remains were excavated, transported to Trieste in Italy for reconstruction, exhibited in Trieste and Paris, and now finally sold.

The skeleton is expected to be transported back across the Atlantic to the US at some point.

However, some have expressed concerns about important artefacts being bought by wealthy private buyers as opposed to museums, which cannot afford to compete.

Director of the Toulouse Museum of Natural History, Francis Dutton, told Franceinfo that the initial price estimate for ‘Big John’ (€1.5million) was already at least 20 years’ of the museum’s acquisitions budget.

Scientists were angered last year, when a 67-million-year-old Tyrannosaurus rex skeleton was sold in New York to an unknown private buyer.

‘Stan’ was bought for $31.8million (around €27.3million), beating the US record for the most expensive dinosaur sale.

The European record now belongs to Big John, who, standing at eight metres long and around 2.8 metres tall, also holds the Guinness World Record for the largest documented skeleton of a triceratops.

The skull, which paleontologists have said is proportionally larger than most triceratops’, measures 2.26 metres long and two metres wide - almost a third of the overall body length.

World’s largest known triceratops dinosaur up for auction in Paris