World’s largest known triceratops dinosaur up for auction in Paris 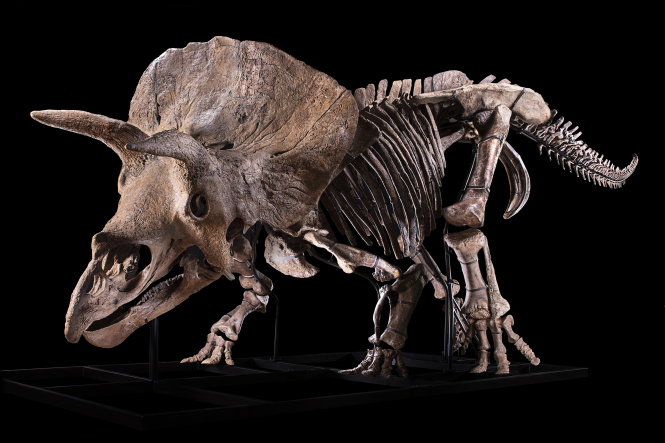 The skeleton is 60% complete with a 75%-complete skull Pic: Binoche et Giquello

The 66 million-year-old skeleton of the world’s largest known triceratops dinosaur will go on sale tomorrow (October 21) at the Drouot auction house in Paris.

‘Big John’, named after the owner of the land where over 200 of its bones were found, is expected to sell for between €1.2 and €1.5 million.

The fossilised skeleton measures eight metres long and around 2.8 metres tall. The skull, which is two metres wide and 2.26 metres long, makes for almost a third of the overall body length.

Triceratops are easily distinguished due to the shape and size of their skull, in particular the three long horns protruding from above the eyes and between the nostrils.

‘Big John’’s skull is of exceptional size, even for a triceratops - the two larger horns are both 1.1m long and over 30cm wide at their base, meaning they can each support a pressure of 16 tonnes.

The skeleton is 60% complete with a 75%-complete skull. ‘Big John’ died in an ancient floodplain (what is now Hell Creek Formation, South Dakota), meaning his bones could be well-preserved in mud.

They were found in May 2014 by geologist Walter W. Stein Bill and excavated more than a year later.

The bones, still wrapped in rock, arrived at the Zoic workshop in Trieste, Italy in October 2020. The Zoic workshop had already reconstructed two of the world’s four most important Triceratops - ‘Cliff’, of the Boston Museum of Science and ‘Gwacheon’, of the National Science Museum in South Korea.

The position chosen to present the fossil was inspired by sculptor Arturo di Modica’s Charging Bull - a three tonne bronze statue the artist illegally installed in front of the New York Stock Exchange in 1989. It was intended as a gift to the city and a symbol of strength after the stock market crash of 1987.

‘Big John’’s skeleton was initially exhibited in Trieste, Italy between July 31 and August 1, then transported to Paris where it was displayed for a month between mid-September and mid-October at the Rue des Archives. For the last two days, it has been exhibited at the Drouot auction house and tomorrow, it will likely find a permanent home.

The Drouot auction house has already made some impressive fossilised dinosaur sales, including an allosaurus sold for €3m in 2020 and a diplodocus sold for €1.4m in 2018.

In the past, it was normally research centres and museums that would buy fossils. However,  there is now a growing enthusiasm for fossil collecting among private buyers.

Celebrities such as Leonardo DiCaprio and Nicolas Cage, who famously entered a bidding war for a dinosaur skull in 2007, are popularising the practice.

It is therefore difficult to predict whose hands the skeleton will end up in tomorrow, in which part of the world and at what price.

Hat belonging to Napoleon and containing his DNA up for auction