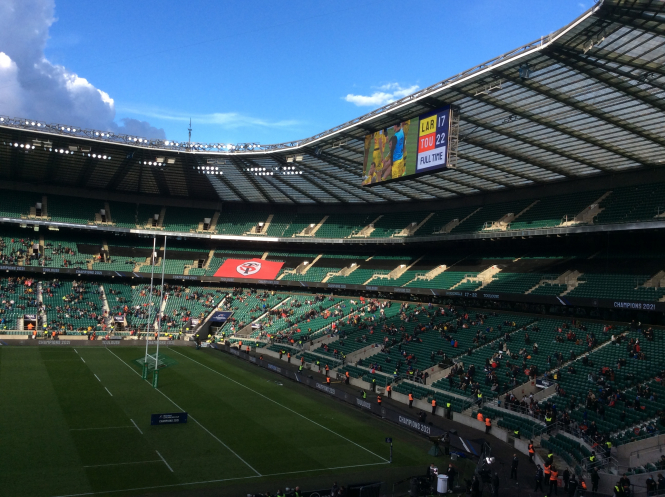 London’s Twickenham Stadium, beloved home of England rugby, was invaded by thousands of patriotic French rugby fans at the weekend.

It has been over a year since the ground could welcome visitors but on Saturday, May 22, for the second time in as many days, 10,000 spectators were allowed (safely masked and distanced) to book seats and watch a hard-fought Champions Cup battle between first-time finalists La Rochelle and four-times winners Toulouse.

We Brits joined the French invasion happily, queueing at the gates, rubbing elbows or hugging each other (now allowed). Some hardy smokers even swapped their cigarettes with complete strangers for the more pungent French kind.

British fans, like me, were keen to soak up a bit of the distinctly Gallic atmosphere, which included the odd waft of tobacco drifting towards the hallowed turf.

No pastis or champers before the match, but plenty of beer, laughs, French expletives and silly outfits. Even on the narrow press gantry, high above the pitch, usually in turmoil, packed with people, coffee cups, laptops and cameras, there was a relaxed, laid-back, “pas de problem” atmosphere.

The weather was atrocious but somehow we imagined ourselves sitting somewhere warm and cosy in sunny France.

As we settled down for an afternoon’s excitement, piped French pop songs (plus Dame Vera Lynn’s We’ll Meet Again, obligatory these days at all public sports events!), entertained us; there were glossy souvenir programmes with French articles to read, and jolly announcements in both languages thanking us for our support.

Firecracker flames shot high into the air before kick-off like a beachside gala at Cannes. This welcoming effort was for a mere 10,000 of us, instead of the usual 82,000.

As the teams ran out in their bright yellow and red strips, I felt grateful and lucky to be there.

In the first 40 minutes, the game was marred by multiple penalties from both teams and a red card for Fiji and La Rochelle centre Levani Botia but the 12-9 half-time score fired up the players on both sides.

Even with one man down, La Rochelle were up to the challenge, and the teams then put on the display of French rugby we had all been looking forward to: speed, strength, and a few arguments.

But despite a late battle on their opponents’ line, La Rochelle were still playing catch up, and the game ended with a 22-17 win for Toulouse.

Referee Luke Pearce, 33, on his first gig in charge of this prestigious match, looked relieved. He had been fair and firm during what was bound to be a toughie. Well done, him.

After the match the tiny terror of Toulouse, scrum half Antoine Dupont, was named the European Player of the Year and received a huge cheer from the crowd when he lifted the enormous silver trophy, nearly as tall as himself, showing it off proudly. So much energy and power in one short bloke - amazing!

England international Danny Care summed up the Toulouse scrum-half's strengths: "Dupont is the heart of the Toulouse team. He makes big tackles and sparks the attack when there’s a chance. Thoroughly deserved."

La Rochelle head coach, former Irish international Ronan O Gara, expressed his team's disappointment: “After Botia’s red card we played the rest of the game with 14 men, but you saw what it meant for the lads and they dug in for each other which was pleasing.”

Sobs galore, but well done to all. This fan was impressed with your true Gallic grit!

The off-pitch display was equally impressive and colourfuI. It didn’t matter which team you supported, as long as you had a loud voice, a flag, a team shirt and, if you were really trying hard, a beret on your head. La Marseillaise was the song of the day. Despite the cold, wet and windy weather, everyone was in holiday mood:

Friends Louise Jarrett and James Threlkeld, from Birmingham, have never visited La Rochelle, but fancy going there so invested online in their stylish Stade Rochelais shirts and turned up to cheer their “adopted” team. “We couldn’t go to France, so we decided to come to Twickenham instead, but bring France with us” said Louise, a special needs teacher.

“We wore Montpelier gear for the Challenge Cup final against Leicester (on Friday) and we beat the British side by one point. Our team didn’t win today, but it was hilarious. People think we are French which is an ice-breaker!

James, a police officer, is keen to find a French holiday home. “We’ve enjoyed trips to Paris and St Tropez and aim to invest in a property.

"I think this period of separation between the two nations has made people here more determined to enjoy French living. La Rochelle seems to have it all, history, sun, sea, boats, rugby.”

Biarritz-born teacher Zelda Escudie supports Toulouse because she studied there. She now lives in London and works as a Year Three teacher in Hampton Court.

“I, and my French friends, all find London a great place to live, but we miss our regular trips back to France.”

Her friend Cyrille Mulsaat, originally from Clermont Ferrand agrees. “The atmosphere is always fantastic at Twickenham, so we all got together today to support Toulouse. We can be as French as we like here! “ he says.

An estimated 250,000 French people live in London and, as I made my way home via Twickenham Station, many of them seemed to be on my platform. All were behaving and the station staff were obviously delighted to welcome back the fans. One told me it had been boring without us!

Covid France: What are the key May-June dates for easing of lockdown?