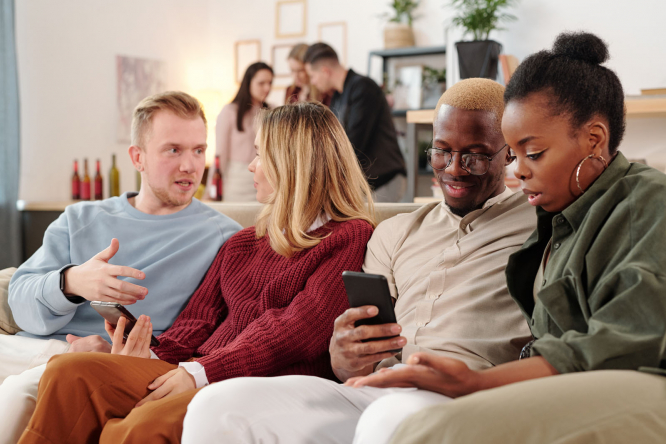 France has seen a surge in conspiracy theory followers in the last decade, however following of the pro-vaccine groups are growing rapidly Pic: Pressmaster / Shutterstock

By Suzanna Chambers and Liv Rowland

France has many vocal vaccine opponents but also a growing pro-science movement of volunteers giving up their free time to research and dispel Covid ‘fake news’.

They are now followed by tens of thousands and have been increasingly busy this year.

Olivier Véran said massive vaccination has helped the country avoid the worst and “we must be afraid of the virus, not the vaccine”.

CNRS criticised some professionals, such as a criminal sociologist, sounding off about the vaccine when it is not their area of expertise.

One senior doctor said anti-vax leaders of the health pass protests should “pay” for the delay they have caused in the fight against Covid-19.

GP Jérôme Marty, president of the doctors’ union UFML, said the protests have wasted significant time in the fight against the virus and “future catastrophes” will probably be caused by this delay.

As the ‘anti anti-vaccine’ social media groups such as Les Vaxxeuses, or NoFakeMed, grow in popularity, one blog, FactandFurious.com, has been certified by the government as official online media.

'The goal is to detect fake news when it breaks'

“When a story interests us, we try to find out if it’s true or false and weigh that all up.”

France has long been one of the more vaccine-sceptical nations but it has also seen a surge in conspiracy theory followers in the last decade. Some commentators attribute this to US influences such as the pro-Trump QAnon faction which emerged around 2017 and claims that a ‘deep state’ of global elites is responsible for all the evil in the world.

Mr Daoust said: “A large number of these theories were spread, especially during the first confinement.

“In France, we had a strict and long confinement, so a lot of time was spent surfing the internet and looking at fake news sites.

“I also think influencers who spread fake news can express themselves more freely here because we remain the country of freedom of speech and human rights.”

Les Vaxxeuses, which began in 2017, parodies anti-vax ideas and has seen almost a tripling of support since the beginning of the year, with 31,000 followers on Facebook and thousands more on Twitter.

One activist, who asked to use the pseudonym Anna as she has had threats of violence, said: “We’ve been told ‘we’re going to put a gun against your head and see if you’re still laughing then’.

“At first, we used our own names to discuss with antivaxxers on their sites but we realised that while we could discuss calmly with some people, others got aggressive and blocked us.

“Since we could not just let people say any old thing – especially as they are militant about it and tell people the vaccine is going to kill us all – we made our own pages to be visible and give out well-sourced messages.

“We have worked together on a new blog, Big Pragma, to be more visible outside social media.”

'In France, the problem is amplified by certain high-profile figures who whip up fear of the vaccines. But for some people, it’s also linked to a general rejection of ‘the system’'

“As long as it is official institutions that are telling us to get vaccinated, they see it as an order from Macron, so you mustn’t do it.

“Plus, the French are famous for moaning about things.

“Some people deliberately stir up people’s fear and misunderstandings and make them believe simplistic theories that don’t take much knowledge to understand.”

Pascale, one of the founders of Vaccins France – Information et Discussion, said interest had “exploded” since the group was founded in 2017 to reassure mothers about the extension of vaccinations for babies.

“It has become enormously politicised with Covid and, more than being anti-vaccine and anti-science, people are against the government.

“So we come across a lot of gilets jaunes, anti-health pass people, those on the far left and right, etc. We feel this sense of hatred against the government, even though the government does not write its own studies, it follows the Conseil scientifique.

“But they are angry against the system and it is a vector that allows them to express that.”

She added that some anti-vax feeling in France can be traced back to health scandals, such as contaminated blood or problems with the drug Mediator.

“They feel that the health system claims to want to do us good but has poisoned people.

“So there’s a certain history of betrayal, that we can’t deny, and they say if they lied to us once, it can happen again, which is hard to argue against.”

She said their pro-science groups are “indispensable” and they have the most success with those who are merely “worried”, rather than those with hardcore antivax views.

“The other side invade social media and we can’t let them do this without contradicting them.

“However, we show that we are capable also of listening to their fears. Some are afraid of thrombosis – and yes, there were a certain number of those with AstraZeneca. If there is a problem we must admit to it.

“It is become more and more violent. Now some of the anti-vaxxers want to bring back the guillotine…”

She said fears that the vaccine is insufficiently tested are prevalent, but are not founded on knowledge of testing protocols.

“They are the vaccines which have been tested on the largest groups of subjects. The ones we give babies were never tested on so many people.

“It’s important to vaccinate as many people as possible – and those that are afraid of it are, most of the time, victims of disinformation based on emotional arguments. It complicates things for us, because we create statistics and studies but people find science cold and unsexy.

“All you have to do is make up a story of knowing a vaccinated person who has died and it will carry more weight than the millions of doses that have been given, mainly without problems.

“Those who are afraid also self-confirm their fears by seeking out more material to reassure themselves they are right to be afraid.”