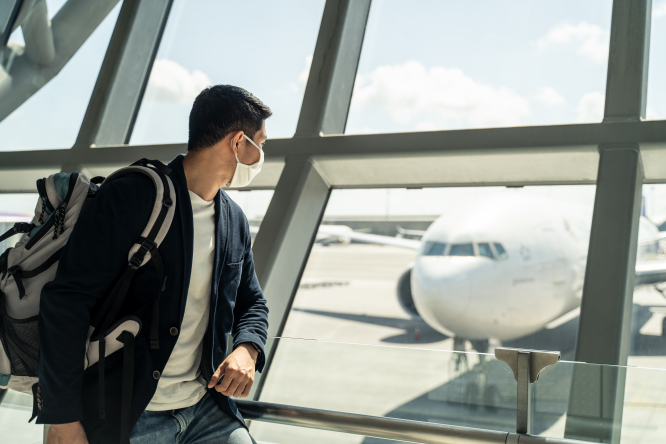 The UK is soon to update its travel restrictions for fully vaccinated travellers arriving in England – here we look in more detail at what this will mean.

In the first change, those arriving in England from non-red list countries after 4:00 on October 4 will be able to skip taking a pre-departure test. This refers to a PCR or antigen test taken in the country in the three calendar days before the one on which you travel (such as an antigen test from a French pharmacy).

The UK states it is also updating its rules to mean that fully vaccinated travellers going to England (or returning home to England) from a non-red list country will be able to swap costly day two PCR tests for cheaper lateral flow tests from an as-yet unspecified date later in October.

France is currently listed as amber in the UK’s travel rules so these simplifications will apply to those travelling from France.

What is more, the UK states that from October 4, the current UK traffic light system will come to an end and be replaced by a 'single red list', which will effectively mark the end of the green and amber lists.

Everyone arriving in England from a red-list country will still have to take pre-departure, day two and day eight tests, and quarantine for 10 days in a managed hotel.

Unvaccinated or partially vaccinated travellers from other countries will still have to pay for a pre-departure test, and will have to do day two and day eight PCR tests.

At present they do not need to quarantine or take a day eight test, but will in future be required to do both.

The Scottish and Northern Irish governments have also announced that in October they will be merging the green and amber lists but have yet to clarify if this will include any simplifications for vaccinated people. Day two PCR tests will remain compulsory for travellers entering Scotland, it has been said.

The Welsh government has said that it will “carefully consider” whether to implement the proposed rule changes.

What is the difference between a PCR and a lateral flow test?

PCR tests must be analysed by a laboratory and so take longer to return results than a lateral flow test. The latter are a form of antigen test and can be self-administered, take no more than half an hour and provide a colour-change result which shows whether Covid proteins are detected or not to the person taking the test.

Day two tests must currently be booked before travel, and can either be taken at a test centre or by having a test kit delivered to your home for self administration followed by posting to a lab. Day two PCR tests in the UK for taking at home, the most convenient option, currently cost around £65-£75, while private lateral flow tests are generally priced around £25-£40.

How do I get a day two lateral flow test?

It is not yet clear whether the day two lateral flow tests will be obtained in the same way as the current PCR travel kits.

The Connexion has contacted the Department for Transport for further information.

However there are already several private test providers which can already send antigen test kits to your home or accommodation, as well as in-person testing centres which, depending on your location, may be a more convenient option.

If the approved day two lateral flow tests follow the same system as day two PCR tests, you will need to order your test before you travel to England. The government provides a list of suggested providers.

If doing the test at home, you must then carry out the swab, repack the envelope and post it back to the provider. In some cases you are also required to 'activate' the kit by filling in a form online.

You will then be sent the results, normally via email.

How do I get a pre-departure test in France?

If you are travelling from France to England before October 4, you will still need to take a pre-departure test in France in the three calendar days before your journey. This does not apply to children aged under 10 years of age.

Please note that children under four do not need to take any tests for travel, while five to 10-year-olds must currently take a day two test and those over 10 must carry out a pre-departure and a day two test.

Pre-departure tests can take the form of a PCR or a rapid antigen test, as long as they fulfil certain criteria set by the UK government.

According to the government website whichever test you take must meet standards of ≥97% specificity and ≥80% sensitivity at viral loads above 100,000 copies/ml.

Most antigen tests provided by French pharmacies will provide these levels of accuracy and The Connexion has not received any reports that they do not comply. French antigen tests are analysed by the pharmacy or test centre (rather than displaying a result to the person taking the test), but the results are also typically available in around half an hour or less.

Read more: How do I get a Covid-19 test in France to return to the UK?

After taking your test, you must be able to present a certificate of the negative result containing your name (matching your travel documents), date of birth or age, the name of the test provider, their contact details and details of the device used for the test if it was not a PCR.

Your results must be in English, French or Spanish.

Antigen tests are available in most pharmacies, although some require you to make an appointment in advance.

You can find your nearest test centre on sante.fr, through which you can find a map of laboratories along with their contact details.

Some French airports also offer pre-flight PCR and antigen tests, which you can often take without booking an appointment in advance.

Do I need to get a test before travelling from the UK to France?

Only unvaccinated travellers aged 12 and over are required to take a PCR test in the 24 hours before their departure.

You can order a test kit to your home or the place where you are staying, although some UK airports – including Liverpool and Gatwick – offer rapid PCR tests with same day results.