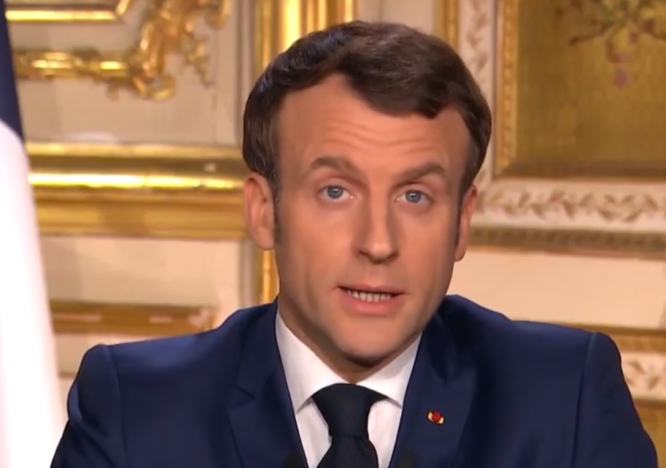 From tomorrow Tuesday March 17 at midday borders into the European Union and within the Schengen area will be closed. All travel will be halted for 30 days.

However "French people currently abroad" will be able to return to France by contacting consulates and embassies. "In concrete terms, all travel will be suspended," said Mr Macron.

To reassure businesses, he announced a raft of help - rents and water, gas and electricity bills will be suspended for small and medium sized businesses in difficulty, while French companies' loans will benefit from state guarantees worth €300billion.

He also said that controversial pension reforms would be suspended, while other legislation working its way through parliament would also be put on hold as the country deals with the current health crisis.

“Everyone needs to get together on one single objective: slow down the spread of the epidemic," the president said.

France is in the midst of a health war against Covid-19, he insisted as he unveiled strict new restrictions on movement for two weeks and postponed the second round of France's municipal elections.

In his second national televised address to the nation in less than a week, Mr Macron asked citizens to stay at home, from 12 noon on Tuesday, and only head out for work, medical reasons, shopping for food and daily exercise.

The additional restrictions were necessary, he said, because earlier public health measures had been ignored.

"Starting tomorrow, at noon, all movement will be strongly reduced. You will be able to go to get medical help, go to work if you have to, and do a physical activity, but you will not be able to meet with friends in the street."

Anyone who breaks the rules faces punishment, he said, without going into detail.

The government, meanwhile, has requisitioned all facemasks for hospital and health use. The 25 worst affected departments will receive shipments on Tuesday and Wednesday. The army and military hospitals will be mobilised to help transport and care for the sick in the most seriously affected areas.Taxis and hotels will also be used as necessary.

“We have seen people not respecting the government’s advice, continuing to go to parks and bars. To all of you who didn't follow the advice, you are not only not protecting yourself, you are also not protecting others.”

Opening his address, Mr Macron said that the speed of the spread of Covid-19 meant that while the level of the current health crisis appeared “remote” recently, it had become an “immediate and pressing reality” in a matter of days.

"We saw people gathering in the parks, markets ... not respecting official advice as if nothing had changed in their lives.

But he defended his decision to hold the first local election ballot on Sunday, saying the decision was made in consultation with health officials.

He closed the speech, saying: "My dear compatriots, France is going through a very difficult time, no one can predict precisely how long it will last.

"I will speak to you regularly, I will tell you the truth about the evolution [of the health situation]. I ask you not to give in to fear or panic. We will win."