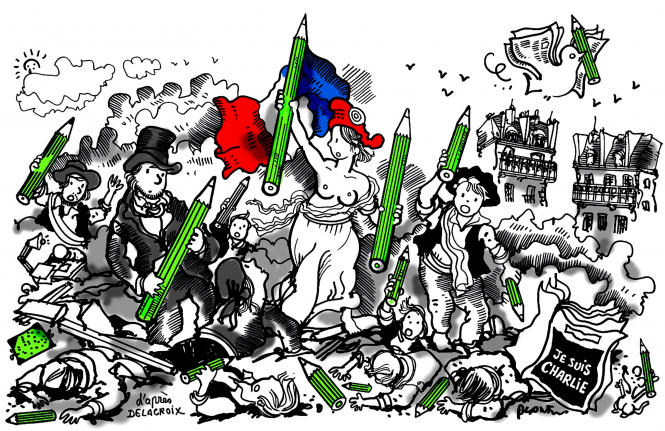 French cartoonist Plantu, a founder of Cartooning for Peace, drew this cartoon on the five-year anniversary of the Charlie Hebdo attack
By Oliver Rowland

In January 2015, much-loved writers and artists were gunned down by religious extremists furious over Charlie Hebdo’s satire of religion.

In the aftermath many people took up the slogan ‘Je suis Charlie’, marched for freedom of speech or sent donations to help the publication, which has continued to publish weekly.

Charlie Hebdo is known for satirising those in power, whether politicians or religious figures, but last month, on the five-year anniversary of the tragedy, it hit out at “new censors” and “new dictators”, saying that with the rise of social media, satirists face new challenges to freedom of speech.

The edition was devoted to bloggers and social media commenters liable to denounce anything that offends their sensibilities on matters such as gender, sexuality, race or disability.

Topics covered included authors being told they should not write about any social groups outside their own experience, and publishers who are employing checkers to see manuscripts do not contain anything that may cause offence.

The idea of a Maison du dessin de presse et du dessin satirique was firist proposed by cartoonist Wolinski, among those killed in 2015.

Culture Minister Franck Riester said in an age where “threats still weigh on” satirical writers and artists, the centre will become a “meeting place” encouraging creation, celebration and promotion of the satirical cartoon, and supporting those involved.

He asked the head of the Centre National du Livre, Vincent Monadé, to present concrete proposals by the end of May.

Cartooning for Peace champions the role of the satirical cartoon in freedom of speech around the world and is among bodies being consulted by the government.

Its president, the cartoonist Kak, said this project “means the French state, beyond just speeches, is ready to invest time, money and people to celebrate a sector that’s dear to us, and which we consider one of the fundamental arts in freedom of expression”.

It could become “a reference point, around which revolve other kinds of organisation that work in the sector”, he said. “It could indeed become an international centre, perhaps. France is still considered by many working in the press and with images, and by artists, as a beacon country in freedom of the press and expression.

“There are historical reasons, dating to cartoons after the French Revolution, especially the famous [Honoré] Daumier. It’s also because of our type of humour - French satirical cartoons can be very extreme and use very dark humour. And also, sadly, for more recent and tragic reasons, because of the attack on Charlie Hebdo.”

Kak said on a national level, there are however already a number of places and events that celebrate the genre and organise exhibitions, such as the annual Salon International de la Caricature, du Dessin de Presse et de l’Humour de Saint-Just le Martel (near Limoges), which has its own permanent centre, and associations like France Cartoon, Le Crayon and Cartooning for Peace.

“We’re all friends and try not to step on each other’s feet. This new project is positive as long as adds to what we have rather than superimposing itself. I’m optimistic the ministry will be sensitive towards what’s already being done.”

Kak said with regard to cartooning in France today, there is good news, and bad.

“The good news is press cartoonists continue to express themselves freely with that freedom of style that we already had. Charlie, heroically, has got back on its feet and has continued to work, and there are other magazines that exist in lots of different forms, whether it’s Charlie, or Fluide Glacial or Le Canard Enchainé etc. So it’s still alive, its heart is beating and it’s on its feet.

“In terms of bad news, one is that the printed press in general, is struggling and the press cartoon still depends mostly on print. The sector is being shaken up and is reflecting on what it’s future business model will be.

“Then there is what Riss has been talking about in Charlie, which I also wrote about in L’Opinion – we must be wary, and we must all be in solidarity over, the pressure exerted by certain people on the social networks.

“There are a lot of people who use them as a way to let off steam and who create scandals, sometimes justified and sometimes artificial, creating a risk that artists, out of fear of being lynched on the internet, censure themselves or, as we’ve seen in Canada and the USA, are sacked because of a social media controversy.”

“We tend not to deal with these controversies well. We tend to panic. Then press bosses, business people, politicians, when they’re confronted by them, rather than analysing the situation calmly – who is behind this, how many people are concerned, is it really going to influence public opinion... – take rushed decisions: cancel, sack, resign, replace etc.”

“For the moment the examples are mostly in North America, but we’re not exempt from it and there’s no saying that tomorrow, if a drawing causes a scandal, justifiably or not, an editor who lacks courage won’t sack the artist.”

Kak said one recent example is The New York Times, which decided not to run any more cartoons in its international edition after accusations that a cartoon of Netenyahu as a guidedog leading a blind Trump was anti-Semitic.

“Above all it was the paper that decided to print the cartoon – which they had taken from an image bank – but they decided to completely distance themselves from the cartoon and from cartoons in general, and sacked their own cartoonists who are both very talented and well-known.

“There is always an editorial choice to run a drawing or not. The artist doesn’t have free reign. So if there’s ever a scandal, the first reflex should be to explain why you ran it and have a dialogue.

“It happens to we artists all the time on social networks that someone is offended by something we drew. We start by explaining why we drew it and what our thought process was. Nine times out of ten the person says ‘OK, thank you for replying’. You mustn’t immediately say ‘Oh, you’re right, it’s terrible, I’m so sorry’ and abase yourself.

“A drawing is thought out. Sometimes we’ve spent several hours thinking why we choose a certain character, why we put them in a certain situation, what we have them say, whether we add certain accessories. We need to explain all that.

“There are two kinds of people who attack you. There are those who are sincerely shocked, and you can dialogue with them and they usually calm down. They might still disagree but say “I’d still have done it differently, but thanks for speaking to me politely” – it becomes a rational dialogue.

“Then there are trolls who are just interested in creating a scandal. You can tell because as soon as you reply, the controversy just gets inflamed. They’re not at all interested in dialogue.”
He said if it turns out that a drawing is truly shocking to a large amount of people in your country, you might admit to a mistake, but not it turns out to be just “a lot of noise about nothing from a few hundred people on the internet”.

A different situation is where people create a scandal but there is a political lobby behind it, he said.

Kak said his approach to cartoons is that “everyone can be a target including myself”.

“It’s actually easier to be funny about your friends because you know them so well you know better how to make fun of them,” he said.

“However there are certain faces I like to draw because they’re funnier, they’re more cartoony and make me laugh.”

He has done plenty of them on Brexit in recent years, he said.

“It’s an inspiring subject because it’s got so many factors – Europe, British culture… It’s like an endless sketch, a kind of hit series, better than watching Netflix.

“Personally though, L’Opinion gives me a subject each day so I don’t choose – for example today it’s police violence. But Brexit has often been the front page story.”

He said his personal view is that Brexit is a catastrophe.

“I understand people who say the Brits have never been completely in Europe and always had to have special rules for them etc.

“But we live in a world that’s more and more divided and there are great powers such as the USA or emerging in China and India, and it’s really not the time to start creating independent breakaways. Being disunited is the worst thing that can happen to us.

“What is more is it represents the victory of fake news. The Brexit referendum campaign is probably the first time in history that fake news had a pivotal influence in a major vote like that.
“Trump also took inspiration from in his presidential campaign.

“Now it’s given a lot of politicians the impression that politics is all about feeding people with fake information and playing on their emotions rather than using facts.”