How to live in the modern world? Look to the 1570s 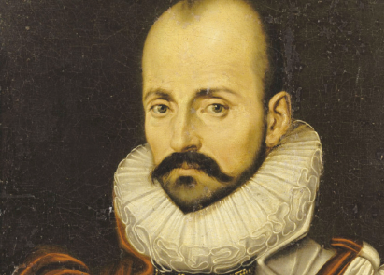 Michel de Montaigne lived from 1533 to 1592, during the reigns of six kings. His book on how to live is still useful in life today...
By Nick Inman

If you want the best, most up-to-date advice about how to live in the modern world, forget personal development courses, blogs and YouTube videos by lifestyle gurus. What you need is the ultimate best-selling guide to being a human being. Don’t be put off by the fact that it was written 450-odd years ago by a Gascon nobleman. Michel de Montaigne might have been a backwoodsman but he has got it all covered and his The Essays is the only self-help book you’ll need. Long past its sell-by date? You could not be more wrong.

As his biographer Sarah Bakewell puts it: “He poured himself into his book, and when you open it, he pours out of it as fresh as he went in.” Montaigne lived from 1533 to 1592 during the reign of six French kings, and throughout the disastrous Wars of Religion, a series of civil wars.

Born into a family of minor nobility, he was a lawyer, landowner, member of the Bordeaux parliament and mayor of the city, royal mediator, traveller and, for a brief spell, an inmate of the Bastille. He was a contemporary of Cervantes, Nostradamus, Michelangelo and Shakespeare.

In 1571, Montaigne dropped out of society to live on the wine estate he had inherited in the south of the Dordogne. He planned to collect his thoughts and make sense of his life. He intended to write as a form of therapy. He was not a scholar, although he was spectacularly well-read – in childhood his first language was Latin – so he opted to write about anything he felt like, chiefly himself and his life.

Because he was not sure whether he would end up with something read-able or a mess, he called his chunks of prose “essais”. Eventually, he had enough text for a book, which he published and expanded.

History of France: the remarkable story of the Grange aux Moines, Haute-Vienne, once owned by King Henry II of England

While some of his successors have picked holes in his methodology, others have praised it as a practical instruction book for being human. Novelist Gustav Flaubert warned: “Don’t read him, as children do, for amusement. Nor, as the ambitious do, to be instructed. No, read him in order to live.”

The book is uncategorisable – idiosyncratic, personable and unique. What you get is really a stream of consciousness, but the whole coalesces into a delightful experience for the reader. He is full of surprises and you get the impression that what he likes most is to surprise himself. Frequently, he starts off on one subject but switches to another as the fancy takes him.

He has been described as more of a conversationalist or raconteur than a writer. He is capable of being entertaining and witty while being simultaneously serious. He is master of the one-liner and reading him is at times like listening to a stand-up comedian.

Themes relevant to the human experience

There is a memorable quote on almost every page. Curiosity leads him always forward and you cannot help but follow. He is also like a universal agony uncle who speaks across time. Themes that obsessed him are the same that obsess us: the fear and incomprehension of death; the difficulty of accepting yourself as an ordinary and imperfect specimen of humanity; how to make the best use of your life without wasting your gifts; how to get enough sex; explaining how human beings differ from animals and what responsibility we have towards them (he was a cat-lover); making sense of the behaviour of other people; and, above all, realising what we know and do not know, and setting the limits of what we can ever know. You name it and he will talk you through it, remotely, from the 16th century.

He is never boastful and his purpose is always to use himself as an example of the human condition. Hazlitt wrote: “Of all egotists, Montaigne, if not the greatest, was the most fascinating, because, perhaps, he was the least affected and most truthful.” His message is not the “look at me” of the social media narcissist but “look through my eyes in order to see yourself”.

Did you know? Bicycles with pedals were invented in France

Such an approach requires full disclosure but humility as well. The Essays is the first confessional “Instagram post”. He tells everything. He is frank about bowel movements and the importance of penis size. But nothing in Montaigne is frivolous. There is a distinct philosophy behind all his ruminations. He begins his book as a stoic – you have to accept your lot– but quickly moves on to scepticism. Never take anything on trust, he tells himself and the reader.

“Que sais-je?” he remarks. “What do I know?” This is the key to Montaigne’s universal appeal. Everything is open to question and every fact we believe to be beyond doubt must be interrogated in the light of lived experience. There is always another way to look at the matter. Listen to experts, he says, but only rely on knowledge that derives from your own experience. Think every subject through and do not be afraid to change your mind or admit you do not know the answer. If you are certain of something, he insists, you are probably wrong.

He was not, however, a cynic or a relativist who avoided offering answers to the dilemmas of life. There has always been some doubt about how devoutly religious he was but when he finds that his scepticism leads into a void (Who says what is right or wrong? Who says what is true or false?) he resorts to Christianity as the final arbiter. What would he say if he were alive today? He would probably remark on how much has changed and how little. He would point out that we really do not know much more about the big questions of life than we did then.

Which writers active today will still be springing off their pages in 500 years, gripping the reader by the wrist and insisting: “We get worked up about the same things. Admit it. How can it be otherwise? For all the changes between my lifetime and yours, one fact has stayed the same. We are both human.”

Further reading: Reading Montaigne in the original is only for the bravest English-speaker. The best modern version is the translation by M.A. Screech (1987, Penguin Classics). Sarah Bakewell’s How to Live (2010, Chatto and Windus) is a readable biography.

The chateau dates from the 19th century but in the grounds is a 14th century tower, on the upper floor of which is the writer’s library, much as he would have known it. Montaigne’s magnificent tomb is one of the highlights of the Musée d’Aquitaine in Bordeaux (musee-aquitaine-bordeaux.fr). At the foot of the recumbent figure is a lion with two tongues, thought to represent the writer’s two languages – French and Latin.

Exploring Haut-Rhin: the village that burnt 60 witches at the stake

The Gascon guru’s view of the world

Montaigne was a great quoter of other writers and he often failed to attribute the words he had borrowed. As a result, some remarks credited to Montaigne come instead from the classical authors he adored. In addition, translations of Montaigne vary in their exact formulations. But wisdom is wisdom.

“We should set aside a room, just for ourselves, at the back of the shop, keeping it entirely free and establishing there our true liberty, our principle solitude and asylum. Within it our normal conversation should be of ourselves, with ourselves, so private that no commerce or communication with the outside world should find a place there…”

“Even on stilts we must walk with our legs! And upon the highest throne in the world, we are seated, still, upon our arses.”

“I can see – better than anyone else –that these writings of mine are no more than the ravings of a man who has never done more than taste the outer crust of knowledge… a little about everything and nothing about anything, in the French style.”

“When I play with my cat, how do I know that she is not playing with me, rather than I with her?”

On how to die:

“To philosophise is to learn how to die… I want death to find me planting my cabbages, neither worrying about it nor the unfinished gardening.”