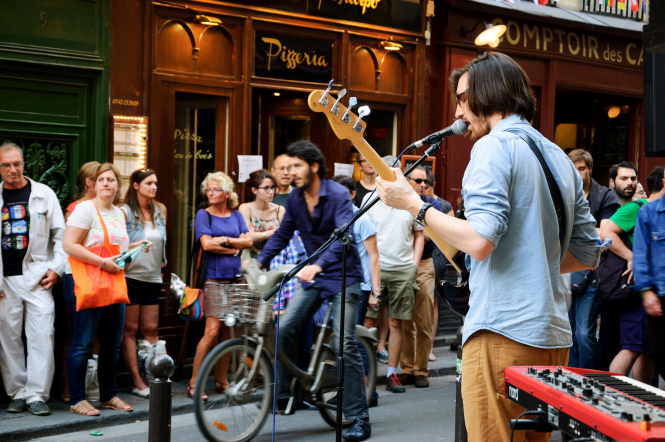 Musicians playin the Latin Quarter of Paris during a previous edition of the Fête de la musique Pic:

France’s iconic Fête de la musique will go ahead this year on June 21, but it will have to conform to the 23:00 national curfew and wearing a mask will be obligatory.

France’s culture minister Roselyne Bachelot confirmed the event, which began in 1982, would run this year in an interview with Le Parisien published yesterday (May 18).

The Fête de la musique, known as Music Day in English, originated in France but has become a worldwide event.

On June 21 every year, musicians are encouraged to go outside and play music on the streets or in parks or other public spaces. Free concerts are also organised, where musicians play for fun and not payment.

The festival did run last year too. Gatherings of more than 10 people were banned, but bigger crowds still gathered in several large cities in France.

Ms Bachelot said that the government’s planned health pass will not be used for the Fête de la musique.

Ms Bachelot said that everyone attending this year’s event should be responsible.

“People will be able to dance, but it will be a masked party,” she said.

More details about this year’s event will be announced shortly.

18th century château in southwest France up for auction from €90,000
17 June 2021
More from Culture
More from Connexion
Get news, views and information from France
Join the newsletter
Subscribe to The Connexion