Musicians beat venue ban with mini-gigs at homes in Toulouse 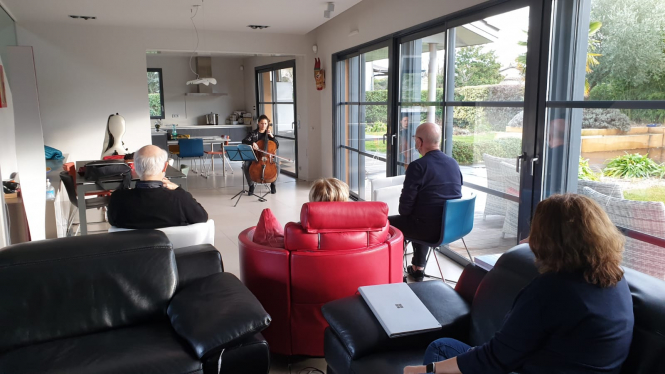 Several new home concert services have launched in France this year giving individuals the chance to book a private gig with a musician at their home or in their garden.

The idea is for a musician to go and play a mini gig in front of a small private audience while respecting Covid-related health measures. Concert halls and venues have been closed in France since October, 2020.

There are at least two such home concert services in Toulouse.

Marion Tiberge, a cellist from Toulouse, came up with the idea of Art at Home after hearing of a similar initiative, House Art Work in Le Mans.

She said it is the only way musicians can play legally in front of an audience, and that the first event in January went so well she plans another one for April 4.

“I went to eight homes in a day. Each time there was an audience of between five and ten people,” she told The Connexion.

“On one occasion, I played outside in the street and all the neighbours came to listen. It was such a pleasure to play for other people once again.”

On April 4, individuals will have the choice to book a cellist, a singer or accordionist who will perform for either ten or twenty minutes, costing €30 per ten minutes.

Ms Tiberge said that the payment was vital for the musicians.

“It is important we ask for a payment to be able to declare at least some income and to show that we, professional artists, will keep on fighting to perform again,” she said.

“We know that even after the restrictions are lifted, life will be difficult. I usually play from time to time in orchestras, but they will no longer have enough funds to pay occasional musicians and I will have to make my living by going solo.

“Last year and this year have been extremely difficult for all artists.”

You can make reservations via the artists association La Boucle by emailing laboucle31@gmail.com, or you can phone Marion Tiberge on 06 89 55 88 48.

Art At Home is not the only musician delivery service in Toulouse. Delivreznoo has been set up by the concert venue Le Bijou and offers to send musicians to your home or garden for €5 per song.

The next Delivreznoo event will take place on Saturday, March 27. If you live in Toulouse you can book your musical appointment online here.

Davy Kilembe, a singer-songwriter from Perpignan who participates in Delivreznoo, told Franceinfo, “it is a positive way of adapting to the situation we are experiencing.

“It is a rebound, a bright rebound.”

‘British music will die’ as touring difficult after Brexit