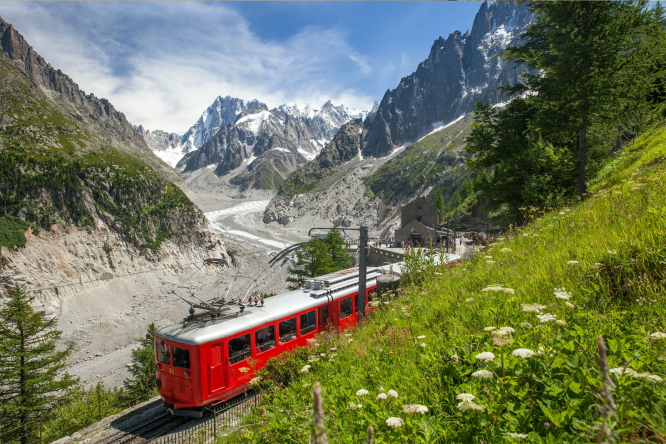 There are steam trains running all over France although many of them only run in the summer months, covering short distances for the delight of holiday-makers and tourists. For the most part they are run by not-for-profit associations and the trains are staffed and operated by volunteers, many of them cheminots (railway workers).

If you are an enthusiast, do not hesitate to get in touch with your local steam train association because they are always on the look out for new recruits, and don’t care if newbies don’t speak much French, as long as they speak ‘train’! To find out exactly what rolling stock each association owns, check the websites as there is no space to list everything within this article. Also do not hesitate to seek out other steam lines in your area, as this may not be a complete list.

Here are some of the steam trains worth exploring in France:

In Brittany, La Vapeur du Trieux steam railway runs between Paimpol and Pontrieux. The route along the estuary takes 1 hour 20 minutes, including a 40-minute stop at the Maison de l’Estuaire in Traou Nez. The staff dress in period costume, making this really feel like a trip back in time. The trains run from May to September and usually carry around 40,000 passengers a year.

For the best views of the water, try and get a seat on the right hand side of the carriage on the way out from Paimpol. Take a picnic to eat in Pontrieux, which is a very pleasant town to stroll around. You can either make the return journey by steam train, or take the boat.

The Chemin de Fer de la Baie de Somme CFBS runs from Le Crotoy (Hauts-de- France) round the estuary of the river Somme to the village of St-Valery. Birdwatchers particularly enjoy the journey (one hour each way) as the route goes through areas not accessible by car.

Regulations permitting, they will be holding their Fête de la Vapeur on July 3-4, 2021, which will also be a celebration of the CFBS association’s 50th anniversary. They are twinned with the Kent and East Sussex Railway in the UK, and aim to gather as many railway enthusiasts as possible over the weekend. CFBS has the largest collection of railway equipment in France and will attract representatives from other associations all over the country. There will be exhibitions, models, local crafts, and to enhance the Belle Epoque atmosphere, vintage cars and people in period costumes.

For dedicated train-lovers the Chemin de Fer de la Vallée de l’Eure (cfve.org) between Rouen and Paris, is also worth a visit, although the track only stretches 10km from Pacy-sur-Eure and Breuilpont. The various vintage locomotives are electric, but if you book a ‘stage conduit’ in advance, you can learn to drive one. Also check out their website because they have in the past operated dining cars so passengers can eat on board. It has also been possible to book the dining car for birthdays and celebration meals. They are actively looking for volunteers (email adhesion@cfve.org).

The P’tit Train de la Haute Somme (in La Neuville-lès-Bray, between Amiens and St-Quentin) runs steam and vintage electric trains on a track that was built in 1916 during the Battle of the Somme. It uses switchbacks or zig zags to get up the hill, meaning the train goes forward on what would be the middle leg of the letter Z for a short distance, and then reverses to climb the next section. There is also an interesting railway museum containing around 35 locomotives and more than 100 wagons dating from the end of the 19th century to the 1980s. (See their website appeva.org for more details.)

In France-Comté in the east of the country, Le Coni’fer runs 8kms from Les Hôpitaux Neufs to Fontaine Ronde, in Doubs practically on the Swiss frontier, using vintage Swiss rolling stock.

Check the website because last year they were serving cheese fondue on some trains, and get there early if you want a seat as there are not enough places for everyone. (The open air viewing platforms are standing room only.)

If you find yourself in Haut-Rhin this summer, and in need of a dose of steam locomotion, check out the Train Thur Doller Alsace which runs between Cernay and Sentheim, just west of Mulhouse.

At Sentheim there is a restaurant or sometimes a food truck, or you can take a picnic. On the other hand, why eat? The break at Sentheim is a great chance to talk to the driver and crew about how steam engines work and if you ask nicely, you can probably talk your way into the cab for a close-up inspection of the controls. Look on the website for theme-days and theatrical animations. If you book ahead you’re guaranteed a seat.

The Chemin de Fer du Montenvers started out as a steam railway but has been electric for more than half a century.

The iconic little red train shuttling to and fro on the 5kms of track is noteworthy to train enthusiasts however because of its steep 5km rack-and-pinion track up from Chamonix in Haute-Savoie to Montenvers (1,913 metres). Once there, you can visit the Mer de Glace glacier (either a 20 minute walk or take the cable car) which is dug out anew every year.

Inaugurated in 1909, it receives around 800,000 visitors a year. (The 500 steps do mean, however, that it is not very accessible for older train enthusiasts and those with limited mobility.)

The Velay Express runs along a 25km line south-west of Lyon between Raucoules in Haute-Loire and Saint-Agrève in Ardèche at an altitude of 1,025 metres. It is served by heritage diesel and steam trains and runs through some spectacular countryside, much of it at altitudes above 1000 metres.

The Train de l’Ardèche leaves Tournon- St-Jean in the Rhône valley north of Valence, and travels 33kms up to Lamastre, in the Cévennes.

Operated by SNC Chemin de Fer du Vivarais, there are steam trains as well as heritage electric locomotives, and various stops along the way. In Boucieu-le-Roi you can even swap onto one of four vélorail routes. One of the nicest ways to enjoy the line is to take the (heritage electric) Train du Marché up to Lamastre on Tuesday during the summer months, and go shopping in the fantastic weekly market. The train gets you there for 10.30am and departs at 12.30pm – so you can enjoy a picnic on the way down. ()

The Train des Pignes operates a few steam train services in the summer (on some short sections of the line), but most of the trains on this 151km line between Nice and Digne-les-Bains are diesel. The route, however, is spectacular and this is the last remnant of what was once the extensive Chemins de Fer de Provence.

The entire journey takes around 3 hours 15 minutes. There are tickets available from Nice which start on a diesel train and then swap to a steam train at Puget- Théniers. Services include a refreshments trolley, a refreshment car, and an onboard boutique. Check their website for special trains like the Train de la Danse, Fête de la Musique and the Halloween Train.

And if you have ever wanted to drive a steam train, their one or two day ‘stage vapeur’ tickets will allow you to do just that (€140 for one day, €350 for two including accommodation and meals).

The Train à Vapeur des Cévennes steam line runs between Anduze and St-Jeandu- Gard in the Languedoc. If you opt to travel in the uncovered wagons you’ll probably end up covered in coal smuts and with your eyes streaming from the smoke in the tunnels, and will happily sit indoors on the way back! But children absolutely love the open-air carriages. (Also check their website for various themed events throughout the year.

In Occitanie, the Chemin de Fer Touristique du Haut-Quercy, Train à vapeur de Martel runs over 6.5kms of track from Martel to St-Denis-Les-Martel and has a steam timetable during the summer months. There are also two heritage diesel trains in service. (See their website for timetables.) Much of the journey is along the sides of the cliffs overlooking the Dordogne valley; the line was used to transport truffles at one time. There is also a small museum above the ticket office, which is definitely worth the ticket price (€1!) and they have a photo album of the museum for people who cannot climb the stairs.

Every Thursday during the summer there is a night train (Train des Loupiotes) which takes you to Mornacsur- Seudre where you can eat out, picnic or simply wander the night market before getting the train back to either Saujon or La Tremblade.

On Saturday mornings the Train des Mouettes goes along to La Tremblade giving passengers an hour and a half to shop the market before getting back on the train.

On the weekend of September 18-19, to celebrate the Journées Européennes du Patrimoine, ticket prices will be reduced and passengers will be able to visit the depot where all their heritage rolling stock is stored and maintained, and on the Sunday there will be a jazz band on the platform at Chaillevette.

Given the current circumstances, always check by phoning ahead when planning a trip on any of these railways.

Where in France will snow tyres be mandatory under new November law?
23 September 2021
More from Explore France
More from Connexion
Get news, views and information from France
Join the newsletter
Subscribe to The Connexion