One tower per family in this noble medieval site in France 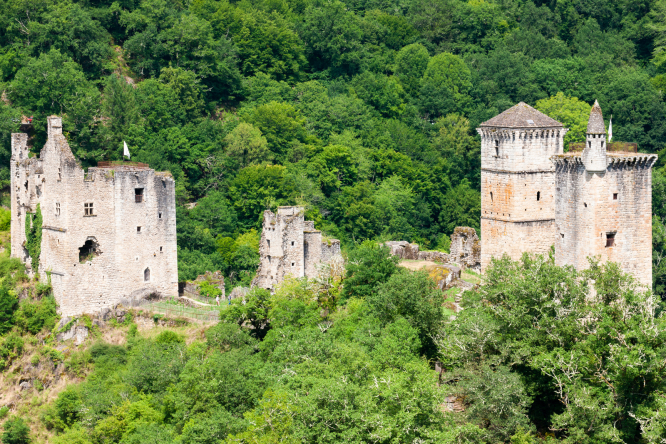 There is still not much known about these unique settlements, like Tours de Merle Pic: Richard Semik / Shutterstock

No-one lives at Tours de Merle anymore. The last resident died in 2000 and its inhabitants are now the tourists who come to visit this dramatic site with its imposing towers and ancient ruins amongst the deep gorges and beautiful forests of Corrèze.

It was once a thriving medieval settlement, but not of the type seen in most history books with a village at the foot of a fortified castle with defensive walls, keep, crenellations, moat, and drawbridge owned by one ruling Lord. Merle was a castrum, occupied by several different noble families, who shared the running of the site, and each had their own tower, some of which are still standing today.

Guide for the site, Graziella Cristiani, says these types of coseigneurie existed in the south of France, but not much is known about them: “Their organisation was very complex but there has not been very much research into them as of yet.

At Merle, each noble had their own lands which earned them income from the taxes the peasants who worked on them paid, and they shared communal profits, such as income from a toll bridge which was one of the only crossing points over the river and was on an important trading route.”

It is thought the first tower was built at the end of the 11th century by Lord Merle. “His daughter married the son of another noble family, the Pesteils and they built their own tower on another part of the site.

“Others came. First cousins, but later ones with no family link. Seven noble families lived here, making it one of the biggest coseigneurie sites.”

No doubt, safety in numbers attracted the local lords, as this area to the east of the Corrèze, was a small independent territory called Xaintrie, surrounded by three powerful regions; the County of Toulouse, County of Auvergne and Duchy of Aquitaine.

The river Maronne ran through it, and Merle is situated on a rocky outcrop, almost completely encircled by one of its meanders, so ideally placed with its own natural defences.

“This means there are no ramparts, and no other defensive architecture,” says Mrs Cristiani.

Its Golden Age was the 14th century. In 1350 there were more than a hundred inhabitants and around 30 cottages, in ruins today.

There were artisans, peasant farmers, priests, woodsmen and a lawyer.

Merle was badly damaged during the Wars of Religion in the 16th century, and the nobility began to leave to find fortune elsewhere. The villagers remained. In 1674 they rebuilt the chapel and in around 1700 the bridge, but by the beginning of the 20th century there were only four or five families.

The last home belonged to Jean Grange, who returned with his wife and six children to his home village of Merle, after being gassed in the World War One trenches. In the 1930s, the first tourists arrived and he opened a small bar, which was taken over by his daughter Marguerite, and then by her daughter Martine who died in 2000.

A local teenager, Pierre Gire, fascinated by the site, began to clear it and research its history. Some years later, we know part of the story, but Graziella Cristiani says there are still many more secrets to be discovered.

‘Village of cats’ in south of France inspired by an old legend
20 January 2022
More from Explore France
More from Connexion
Get news, views and information from France
Join the newsletter
Subscribe to The Connexion