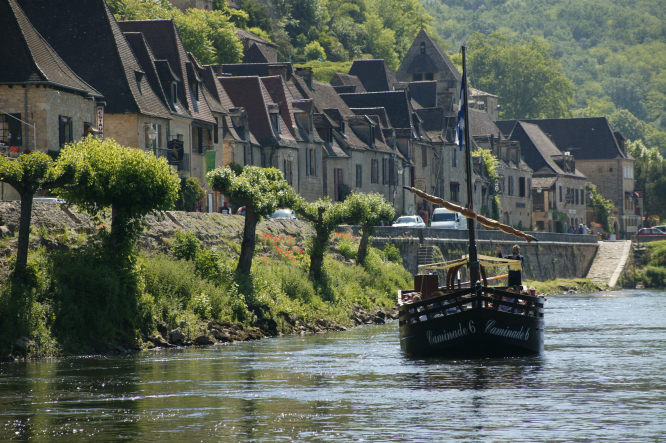 One of the most famous inhabitants of the village was Jean Tarde, chaplain to King Henri IV, whose family built one of the finest houses still owned by his descendants Pic: Matthieu Anglada

La Roque-Gageac, one of France’s Most Beautiful Villages, has always been an attractive place to live. Traces of human habitation go back to 25-35,000 BC when early man enjoyed the micro-climate provided by the south facing cliffs which absorb the sun and warm the strip of land where the village is now built between rock and river.

Pierre Van Nifterik-Lavialle pilots one of the Gabarres Caminade tourist boats and has lived in the village all his life:

“La Roque-Gageac was once a prosperous port attached to the town of Sarlat, and ruled by its bishops, who used it as a refuge in times of war.

After the Vikings invaded in the 9th century, they fortified the village. Where the road is today there were walls and seventeen doors.”

During the Hundred Years War 1337- 1453 they built a castle, with steps up to a natural cavity, 40m above the river, which they protected with crenelated walls as a last refuge from attack. 350 soldiers were on permanent duty.

Mr Van Nifterik-Lavialle says they had another unusual, defence strategy:

“At the entrance to the village there was a hospital for lepers. They were let out when invaders approached, to frighten them off with fear of infection. La Roque-Gageac was one of the only settlements in the area to avoid invasion during the Middle Ages.”

The village bustled with activity. In the 15th century there were 1,500 inhabitants and plenty of commerce with rope makers, sail makers, boatmen, and merchants.

One of the most famous inhabitants was Jean Tarde, (1561-1636) a humanist, cartographer, astronomer and mathematician. His family built one of the finest houses in the village, standing today, and still owned by his descendants.

“He was chaplain to King Henri IV and a friend of Italian astronomer Galileo, and brought the first telescope into France. He believed the earth revolved around the sun, a revolutionary idea which did not please the Catholics. He was only saved by his connections with the king. He retreated to La Roque-Gageac and completed important early studies on sunspots.”

For years, its defence role, allowed the village to escape taxes, until Louis XIV decided enough was enough. To pay their debts the villagers pulled down the ramparts and sold the stone and wood.

The boat-trade was central to the village’s prosperity. Wood for vines, mill wheels from a local quarry, and wine from Domme, before phylloxera set in, were taken down river in exchange for salt and other goods from the city. The route back upstream was arduous. For the last 50kms the only way to get the boats home was for men on the tow path to pull them along on ropes. The boat trade came to an end with the development of the railways in the late 19th century.

The population dwindled. In 1957, tragedy struck, when a huge part of the cliff face fell, destroying seven houses and killing three people. The Mairie had to dynamite the cliff to stabilise it, destroying another ten, empty houses:

“It took ten years to clear the debris. If you look closely, though all the buildings are in stone, half are ancient ones and half are modern.”

In winter, there are now twenty inhabitants at most. In the summer, tourists come from all over the world to admire its beauty.

18th century château in southwest France up for auction from €90,000
17 June 2021
More from Explore France
More from Connexion
Get news, views and information from France
Join the newsletter
Subscribe to The Connexion