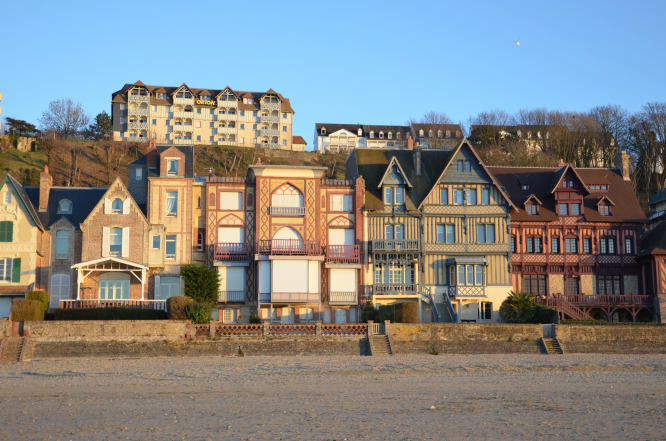 Trouville-sur-Mer is the perfect example of a French seaside resort which developed in the 19th century when the wealthy left the capitals of Europe to spend summer on the coast. The legacy from that period is the quantity of impressive seaside villas.

Travel in France this summer: SNCF to offer temperature checks for train passengers

Architects and owners worked together to create buildings which would be unique and stand out from the neighbours. A very good example is the Villa Honoré, built in 1866 and named after its owner, who was a rich exchange broker in Paris. Michèle Clément is a tourist guide in the Calvados resort and an expert on the different villas. She said: “Nineteenth-century architecture was eclectic. For the first time, with the arrival of the railways, people could travel more easily and they would bring back ideas from new places they had visited. In this villa there are Renaissance lucarne windows, an English-style bay window and Italian-influenced sculpted busts, and a painted niche for decoration."

“There is no local stone so it is built in brick and architects had the choice of two colours. Traditional red came from clay at the top of the nearby plateau, and yellow from clay by the river. Usually, the red was used for the walls and the yellow to outline windows and doors and provide decoration. The villa is a great mix of styles but the final design is harmonious. Unlike many other villas which have been turned into apartments, this still has one owner and leads directly on to the beach.”

Other styles for villas in this coastal corner of Normandy came from Savoie chalets, as the Alps were a popular destination for 19th-century travellers, and traditional Norman half-timbering. Some have more exotic Persian features and one, on the beach, is in the shape of a fortified castle, complete with round tower and crenellations.

“This belonged to Charles Mozin,” said Ms Clément. “He was a painter who stayed in what was then a small fishing village in 1825. The paintings he took back to Paris from his visit were displayed in the new, fashionable salons, and the rich businessmen and officials under Napoleon liked what they saw.”

The idea of seaside resorts had been introduced from across the Channel, when a doctor in England, Richard Russell, began promoting the health virtues of the sea by either drinking it or bathing in it in the 18th century. The idea of swimming for pleasure had still not caught on. Doctors gave prescriptions for cures and advised how many times a day or week the patient should go in the sea. Dr Russell founded Brighton as a bathing resort.

Boulogne-sur-Mer was the first in France and the idea quickly spread along the coast. Mozin’s paintings showed a new spot, which was immediately attractive to the “nouveau riche” of post-Revolution France. The great era of building in Trouville started in 1850, and intensified with the arrival of the railway in 1863. Industrialists from the north, lawyers from the cities, artists, writers and theatre people, plus the new nobility created under Napoleon, came to the coast to build some of the first-ever second homes, which they would occupy for up to two- and-a-half months in the summer. They were shut in the winter when the town was deserted, just as many seaside towns are today.

Villa Montebello is now the town’s museum, but was originally built in 1865 for Marie Périer, Countess of Montebello. She was the granddaughter of one of the founders of the Bank of France and widow of the son of Marshal Lannes, who was given the title of Duke of Montebello for his services to Napoleon. Karl Laurent, director of the Musée de Trouville, said it was very important for someone of her social standing to own a villa in the resort: “She was one of the first to buy land in this part of the town with a commanding view over the bay.

“She chose Jean-Louis Celinski de Zaremba to be her architect. He had been called into the town to work on the harbour but also built villas and it was one of the first he designed in the area. It was essential that it would be imposing, and that everybody could see who it belonged to. Now mansion-owners prefer to hide their possession behind high walls and hedges. Then, the gates would be left
open so everyone could see how grand and original the building was. People were proud to show off their wealth."

“It must have been a wonderful time to be an architect because they were given liberty of expression to create and the wealthy owners had the money to pay for it. It must have been incredible to see new villas emerging from the earth and wonder what this new building would look like.”

French prefer to be "well off, not rich", says Connexion columnist Nabila Ramdani

Villas were grandiose. The villa of Montebello is typical of the general layout. It has six storeys. Two were in the attic for the servants’ living quarters and one was half underground and housed the kitchens, laundry and other working areas. Ms Clément explained there were usually two cellars. One was for the everyday wine and cider, for which the employees had the key, and one for the champagne and strong alcohol, for which only the employer held the key.

On the ground floor in the biggest villas there would be a little dining room for breakfast and for the children to eat in and a large dining room, with room for musicians to play while dinner and lunch were served. There would also be salons for receiving the numerous guests expected over the season and for holding parties. It was an opportunity to make contacts for business after the summer break.

The first floor would have bedrooms for the family and nanny, and guest rooms were on the second floor. Today, visitors can still discover the huge variety of around 200 villas from this period which are still standing. The tourist office organises historical walking tours and it has a map which outlines the architectural features.