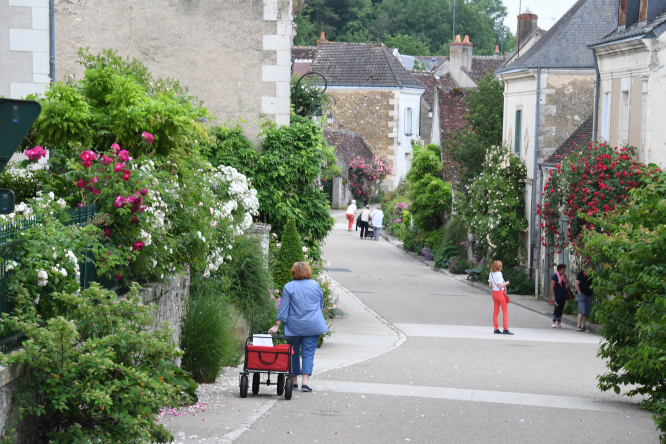 Chédigny, a small commune with 570 inhabitants in the Indre-et-Loire department is unique because it is the only place in France where an entire village has been awarded the prestigious Jardin Remarquable label. It calls itself a ‘village jardin’.

The village where pedestrians and flowers rule over cars and vans

Roses and other climbers cover the walls of the pretty houses and instead of pavements there are flower beds. Pedestrians have to walk in the road but this is not a problem as they have priority in the streets and though cars are allowed, particularly for local residents, they have to share with walkers and cyclists and drive at under 20km/h.

There are 1,000 rose plants with 300 varieties and more than 3,000 perennials. Every year around 30 new roses are planted and new beds are created. In the spring, 1,500 bulbs burst into flower. No chemicals have been used for the past ten years, so the village is alive with birds and insects.

Behind the presbytery there is a Jardin de curé, (also referred to as the Jardin du presbytère) based on research into what was grown in 17th, 18th and 19th century priests’ gardens. There is also a communal area planted with vines, a reminder that before the phyloxera disease hit this area there were 230 hectares of vines around the village.

How this more natural way of living is affecting residents

Isabelle Béjanin, in charge of communications for the Mairie, says the most extraordinary part of the story is the way in which the vegetation has changed the life of the villagers: “It makes it a far more peaceful and pleasant place to live in and brings local people together. Before cars and lorries choked the streets, now the presence of the plants and the people make it easier for drivers to slow down and to avoid the centre if possible."

“It has brought Chédigny to life and we have several festivals. One is our annual Rose Festival on the last weekend in May which attracts 15,000 plant lovers and where we work very hard to make sure
all our participants are high quality horticulturists. In the summer, there are several musical events, with baroque music in the Jardin de curé. 100,000 visitors come every year and so it has encouraged tourism and led to shops opening in the centre. There is a very special ambience here created by the flowers.”

The mayor who transformed the village

The transformation was not planned, but started in 1998, when the mayor at the time, Pierre Louault, wanted to make his village prettier without cars and vans parked all along the main road: “He started by planting a few roses”, says Ms Béjanin. “They flourished, so more were planted. At the same time all the overhead telephone and electricity wires were buried so they took advantage of the works to create flower beds. They then called on experts to advise on the roses and introduced a special kind of pruning, to allow abundant flowering overhead.”

She says the village became a Jardin Remarquable following a chance visit by the Minister of Culture, Jean-Jacques Aillagon: “He found something incredible here which was not just the huge number of different varieties of plant, but the very special atmosphere in our village jardin. The award was given in 2004.”

The village has its own roses created by famous rose specialist André Eve. First was the Rose Blanche de Chédigny in 2002, a white rambling rose, followed by a pale pink shrub rose, Jeanne de Chédigny in 2004. This was named after the oldest resident at the time who was 98 and won recognition for sheltering Jews during the Second World War.

The best plants to grow in France to deter mosquitoes

The Jardin de Curé was opened in 2017. It is unique because though there has been no curé at Chédigny for years, it is situated in what was the priest’s garden in the heart of the village near to the church and is as near as possible to the type of garden that would have existed here in the past. It was drawn up after consultation with several experts.

“These gardens were there not only for the priest, but also for parishioners,” says Ms Béjanin. “Medicinal plants were grown for the use of the village and vegetables and fruit were given to those who did not have enough to eat. Flowers were grown to decorate the altar.” It is a walled garden with vegetables, fruit trees and bushes, herbs, medicinal plants as well as perennial and annual decorative flowers.

The garden is laid out with square and rectangular beds, and there is reference to the Christian religion in one area laid out to represent the cross. After advice from the former chief gardener at the Jardin du Luxembourg, Paris, fruit trees have been trained over arches using traditional espalier forms.

The vegetables are ancient varieties and are no longer given to the poor but are used in the village’s restaurant. The apothecary’s bed has 120 medicinal plants – a reminder that at one time this was the only ‘pharmacy’ in the village. There is also an experimental bed, which would have existed for exotic plants that missionaries brought back from their travels.

Many of the plants are difficult to find in the 21st century and the creators had to do extensive research to find nurseries which stocked the 150 different varieties that now grow in the garden. One was an unusually coloured Sweet William with very dark purple flowers, as the choice of colours was sombre rather than exuberant in the clergyman’s garden. The plants in the village and the Jardin de Curé are gardened organically, the beds are regularly mulched and watering is limited.

Discover more quirky French villages such as Haut-Rhin: the village that burnt 60 witches at the stake

The commune has two full-time and one part-time gardener who care for their village’s abundant greenery. Amateur and professional gardeners can take part in courses organised by the village and a horticulture school. Since its conception it has won several prizes as well as Jardin Remarquable.

It won the Golden Flower in the national Villes et Villages Fleuris label, it was given a Rubans du Patrimoine, which honours actions which bring the local heritage to life and it has been praised by the public body, Cerema which gives advice on improving the environmental living conditions in villages and towns, for the way in which its gardens have transformed the life of the local inhabitants. Visitors can wander for free through the village. The Jardin de Curé is open from May to September every day, except Monday and only on weekends in October. Ticket price €3. chedigny.fr