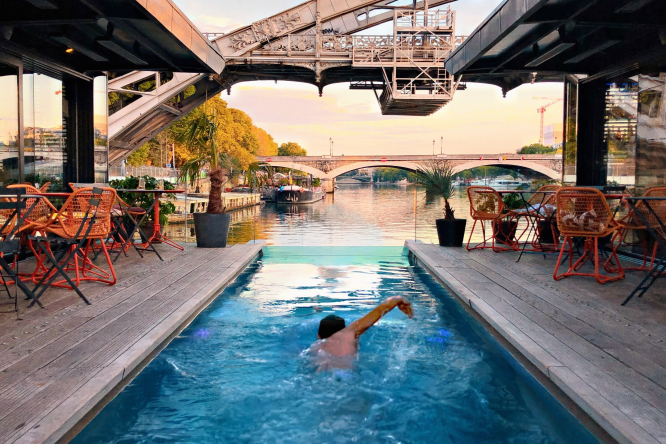 Pool by the Seine. Photo by Staycation.
By Connexion Journalist

A new holiday trend expanding in big cities is to go on a daycation and spend a day, not a night, in a local hotel. Following Covid-19 this might become even more popular as people may want to cut down on travel.

As early as February, before confinement, studies showed that more people were choosing holidays closer to home. Protourisme, a market research agency, specialising in tourism, found that 37% of holiday makers now include environment as an influence on their choice of destination, compared to 27% in 2019 and 10% four years ago. This means more people are less likely to travel long distances. More than 20% said they would not take an aeroplane and 15% said they would not go abroad. One solution for a change of scene and a mini-holiday is to stay near home and rent a room in a three to five-star hotel for between 50% and 60% and up to 75% of the normal price. You can then use the facilities, sauna, swimming pool etc and indulge in a bit of luxury.

Read more: how will deconfinement affect summer holidays in France?

The concept was dreamt up by David Lebée, a French businessman who worked in the hotel business and realised there was a gap in the market. Hotels had empty rooms during the day. There were potential clients who wanted to book in. Technology meant the two could be brought together by an app. It was launched in 2010 and is now available in big cities in 25 countries. Communications head, for Dayuse, Deborah Laskart says there are three types of client: “The first category come to enjoy a day out with a difference. “Couples come for romance, popular on Valentine’s Day, days are offered as birthday presents or for Mother’s Day, or just as a way of doing something different. “People like using the facilities, which are normally free and there are not many people around as hotels are often empty during the day.”

It is an expensive way of going to the swimming pool at around €110 a day for a room for two in a top hotel, but the changing facilities are superior to the municipal sports centre. “The second group come for business,” says Ms Laskert. “They may want somewhere to rest, shower and change between meetings and a quiet room to work in. We also get what we call digital nomads, who are fed up of working at home on their computer and fancy a luxury office for a change. “Hotel rooms are also hired for either press interviews or client meetings. “The third group are travellers with a long wait between flights. Hotels have had this daytime clientele for years, which led to the idea of also offering day stays for leisure use.”

Read more: mobile cinema screenings coming to a village near you

Different cities have different trends. In New York it is mainly business and travel, in Paris leisure and business and London is very much business but with more and more people booking for a special day out. Another Paris based app, Staycation, launched in 2018 offers one-night holidays for Parisians just a metro-ride away from their home or an hour’s drive away. It is based on the same principle that one in four rooms in four and five star hotels are not filled for most of the year and so they are happy to offer lower prices than normal via the app.

The founders say the concept of the annual holiday has not changed since 1936, when workers first had the right to paid holidays and it is time to introduce a new approach where you can be a tourist in your own town. They put up offers every Wednesday at 9am up until Sunday 7pm and a typical stay will include a night in the hotel, breakfast and an activity which can include a massage, swimming pool, evening meal overlooking the Seine, extra big breakfast. They say more than 400,000 Parisians have signed up and they launched the idea in London last year.

Read more: where to buy protective masks in France