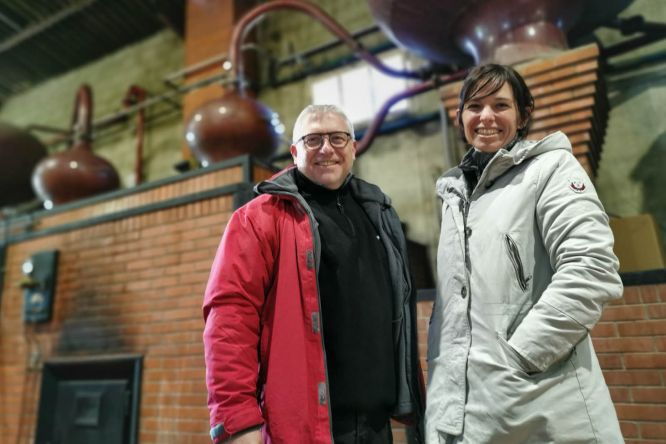 'The truffles make the gin an amber colour, which probably helps with the idea people have that it is a digestive' Pic: Courtesy of Grand Nez distillery

Truffle is sliced up and added to triple-distilled spirit. The gin also includes vanilla from Madagascar, pepper from Java and local yellow apples.

Anne-Hélène Vialaneix, who set up the Grand Nez distillery with her partner Eric Lugas in 2019, said: “Most of our clients said they drank it as liqueur after the meal – it is surprisingly sweet with the vanilla and the surprising hazelnut and butter taste from the truffle.”

They aim to use only organic ingredients and source locally.

The truffles are summer ones from Gers, harvested in early autumn.

“We found black truffles lost most of their odour when they were added to alcohol, which is why we chose the summer truffles,” said Ms Vialaneix.

“The truffles make the gin an amber colour, which probably helps with the idea people have that it is a digestive.”

Both the distillery’s London dry gins won medals at the World Gin Awards.

Attribut No1, which has camomile and kiwi, won a silver medal and Attribut No2, with iris roots and ginger, got a gold. They sell for €38.

French people traditionally drink little gin, but Ms Vialaneix said this is changing, especially with the fashion for artisan gins in the UK and other parts of the world.

“Before Covid, people travelled and saw the great increase in the range of gins which were available. It is a market which is growing.”

The distillery uses an adapted still from Cognac instead of the more usual column stills, and has started a project to try to grow its own organic juniper berries, a key gin ingredient.

“They grow well in France but it’s frustrating trying to find them,” said Ms Vialaneix. “We are partnering with a local agricultural college to see if we can set up a system to produce them commercially, both for us but also for other bio gin-makers.

“We have a special tool made for a vine tractor to do the groundwork, and we are trying to shape the juniper bushes into tree shapes which will make mechanical harvesting easier, like they do with olives.

“Trying to pick commercially by hand will just be too slow and expensive.”

Another famous fungus from the southwest, the cep, is unlikely to find its way into the gin bottle soon. “Getting its flavour and perfume carried in alcoholic spirit is too hard, but we are always experimenting,” said Ms Vialaneix.

food producer
More from Food and Drink
More from Connexion