Go green: Meet the spirulina producer in France (who even sells soap) 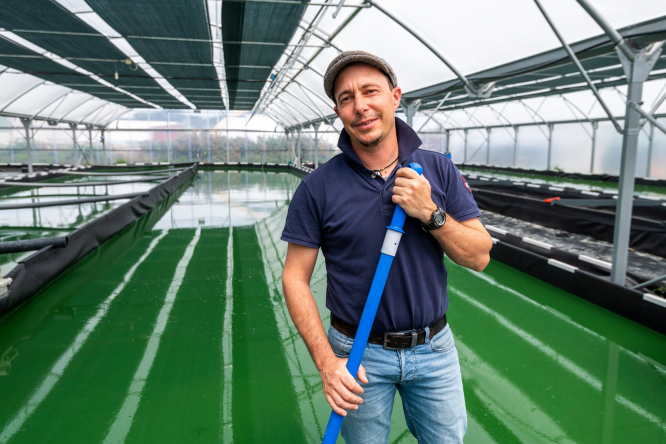 'Spirulina can be dissolved in apple juice or a smoothie, or sprinkled over yoghurt or added to salads. It makes everything go very bright green!' Pic: Spiruline de Retz

Spirulina is a popular food supplement made from algae, which contains concentrated protein as well as vitamins, minerals and antioxidants. It is said to decrease inflammation, blood pressure and cholesterol, and protect against a multitude of diseases including cancer.

It can be sprinkled over food, incorporated into recipes or simply taken as a supplement. Hugo even sells soap made from mimosa and spirulina, and it can also be used in face masks to rejuvenate the skin although it is mainly used as a food supplement.

Mr Baudet grows his spirulina in large flat tanks inside greenhouses where it is sheltered from pollution and pesticides. When the spirulina is sufficiently concentrated, he strains the water through a very fine mesh and the resulting ‘green crème fraîche’ is pressed to remove around 70% of the water.

It is then passed through an extruder which forms it into strings, like spaghetti. These are dehydrated very slowly for six hours, before being broken into small lengths by hand ready to be packaged. Everything is done on the farm.

“I was producing mussels, but I wanted to do something different,” he says. “I had already discovered spirulina and used it myself. I think it gives me a little more stamina and protects my general health. So I approached the Fédération des Spiruliniers de France and asked for information about setting up as a producer.”

He says that spirulina is especially useful for vegetarians and vegans as it contains a lot of protein, but that to preserve all its properties, it should be cooked. “It can be dissolved in apple juice or a smoothie, or sprinkled over yoghurt or added to salads. It makes everything go very bright green!”

He says people see best results when they take it daily. “It helps people recovering from surgery, illness or pregnancy, and some people take it during the change of the seasons. Sportspeople use it to reinforce their diets.”

During October it is possible to visit the farm and see how it’s made, and of course visit the farm shop on Fridays from 4-6pm. (Phone ahead.) The products are stocked locally, and can also be bought online.