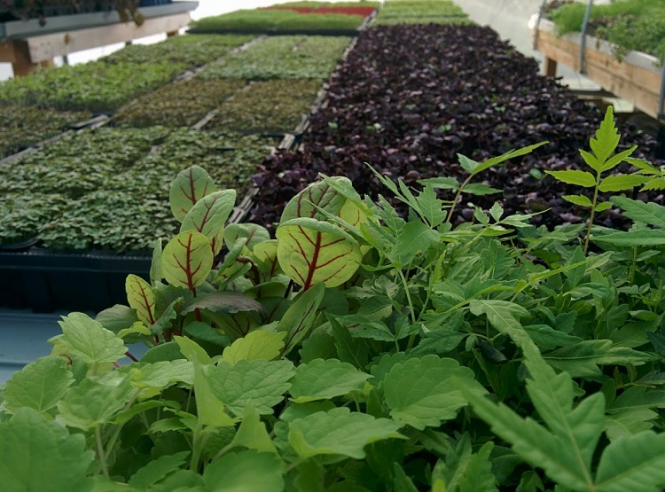 Microgreens have arrived in France. Michelin starred chefs are adding them to their gourmet dishes, city growers are discovering they are the ideal urban crop and you can easily buy kits to grow them at home.

Englishman Chris Kilner was one of the first to introduce them to chefs.

He grows them at his home at Saint-Jean-en-Val, near Issoire in the Auvergne and makes regular deliveries to around 60 gastronomic chefs in the region, of which several are in the Michelin guides – eight with stars, eleven rated Bib Gourmand and twenty-two Assiette Michelin.

His business came about almost by accident. After several years as a robotics specialist in the high-tech start-up world in Paris, he craved a rural lifestyle and began growing microgreens as an experiment for his wife at his home in Puy-de-Dôme.

He offered some to a local restaurant, who loved them and Radix.fr developed from there.

He thinks he might have been the first producer in France, and reckons there are now about twenty.

He says that microgreens (or micropousses in French) are simply very young plants: “They are eaten when they have a minimum of their first four leaves.

Chefs love them because the flavour is very concentrated and they use them for taste and decoration.

There is a lot of talk about them being highly nutritious, which is true, but you would only get the benefits if you ate them in big quantities.”

He says in general you can eat the young shoots of any plant for which you can eat the adult stems, leaves or flowers. “Some plants have edible fruits, but poisonous stems, like tomatoes and cannot be used as microgreens. Others like lentils have edible seeds but the young shoots are bitter unless grown in darkness. Even sweetcorn can be delicious and surprisingly sweet if grown in darkness, though this is a form of contrived torture.”

He says they are not the same as sprouted seeds – graines germées – where you eat the seed and the shoot before it develops leaves.

You do not eat the roots of microgreens and yes, for anyone who grew mustard and cress as a child –sprouting out of egg shells on soil or even on damp kitchen paper – it is the same process.

Each has its own distinct flavour. Lemon balm is used for its citronella and lime overtones, wild rocket has an intense hot wasabi flavour, and the more exotic perilla from Asia is reminiscent of cumin and citrus fruit.

Depending on variety and chef’s requirements the microgreens are delivered, still rooted in compost in their trays aged between eight and 45 days.

Adrien Descouls, semi-finalist in the 2018 Top Chef competition recently returned to the Auvergne region where he grew up to open his own gastronomic restaurant, Origines (see Big Interview, March) and says that micropousses are a very important ingredient in his creations: “I either use the baby product to reinforce the flavour of the adult product, which I might do for celery, for example, or I can use it as a kind of seasoning to bring out the flavour of a different product.

“I often work with beetroot and I will try and find a microgreen which will reinforce the beetroot taste. I am using them more and more. I work very closely with Chris, and he delivers two to three times a week. He is always trying to find me new ideas and experimenting with different plants to find new tastes and seasoning. It is a very simple, healthy product which matches my kind of cooking.”

Mr Kilner grows his microgreens organically and in soil. The plants are either outside or in a greenhouse and with the increasing demand he has started growing them under lights in organic compost in winter. He has taken on employees, and says growing this type of crop is just as labour intensive as classic farming:

“It is intensive because we have to sow every week of the year and keep track of each plant’s progress as they are all ready at different times. It is very difficult to take a holiday, because if you are away for a couple of weeks, you have missed both the harvesting of some plants and the sowing of others.

“The advantages are that it is not as back-breaking as working in the fields and you do not need much land, and here we live in the beautiful Auvergne and enjoy eating what we produce.”

Microgreens are perfect for urban farms because they do not take up much room. Hydropousse claims to be the first “vertical farm” in Paris, where the mini plants are grown in trays on shelves reaching from floor to ceiling and grown hydroponically. Co-founder Audrey Bonneil says they started in 2018 in small premises growing just a few varieties.

In 2019, they were able to invest in premises three times as big, grow more than fifty varieties and work with more than eighty chefs, of which thirty have Michelin stars. “Many herbs used by restaurants are imported and are not fresh when they arrive and have very little taste. We can offer fresh, local produce even in Paris. The advantages of growing inside is that we can control the light, temperature, humidity and nutrients. We can eat our plants direct from the trays as there are no pesticides involved.”

The company is hoping to expand further and to experiment with even more plants.

As well as top chefs, microgreens are being taken up by urban farms and charity projects.

They sell not to restaurants but to local Parisians and say they are not only healthy with their high concentration of vitamins and mineral salts but will also bring a zingy taste to salads, soups, sandwiches, fish, white meat and pasta dishes.

Growing small has created a new type of agriculture – micro-urban farms, a way of bringing fresh food to the city.