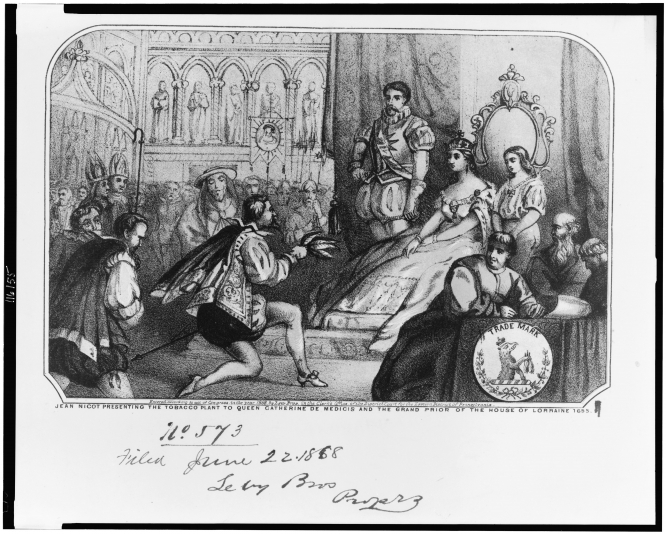 The name for nicotine sounds similar worldwide, whether in German, Japanese, Arab, Chinese or Russian. It was taken from the latin for the tobacco plant, Nicotiana tabacum. It was named after a 16th century French diplomat, Jean Nicot, who would never, in his lifetime, have expected to achieve such international notoriety.

He was born in Nîmes around 1530, the son of a lawyer. After studying at the Faculty of Arts in his home town he made his career in the Royal court at Paris, where he was archivist to Henri II. In 1559, he was sent as ambassador of France to Portugal. There he discovered tobacco, which was already well known in Spain and Portugal after Columbus brought the first plants back from the newly discovered America.

In Lisbon, Jean Nicot was given some seeds and planted them in his garden. He was impressed by the plant’s medicinal properties. At that time tobacco was thought to cure all sorts of ailments, among them skin complaints, poor eyesight, headaches and even lung conditions.

In 1560, Jean Nicot sent tobacco in the form of snuff to Catherine de Médicis to cure her son, who was now, aged 16, King Francois II. He suffered from many ailments including migraines. He died that same year, on December 15, but even so, his powerful mother was impressed by the way tobacco had alleviated his symptoms. It became known as “herbe à nicot” or “herbe à la Reine”. In recognition of his services to the Crown, Jean Nicot was awarded a title and became Seigneur de Villemain.

In 1753, the Swedish botanist Carl Linnaeus, who introduced the modern system of naming plants and animals, chose the name Nicotiana for tobacco. Later, when the molecule nicotine was discovered in the early 19th century, it was named after the plant in which it was found.

During the 16th century another Frenchman fought for recognition that it was he, not Nicot who had introduced tobacco into France. André Thevet was a Franciscan priest and explorer who had travelled to south America and brought back seeds himself, which he planted in his garden at Angoulême. He said: “I can claim to be the first to bring the seed of this plant to France, plant it and name this said plant, Angomoisine. Since then, an imposter, who never made the journey, had the plant named after him, some ten years after I had returned from the country.”

Perhaps, if he had known the negative connotations nicotine would have in the modern world, he might have been content the plant and chemical were named after Jean Nicot, rather than himself.