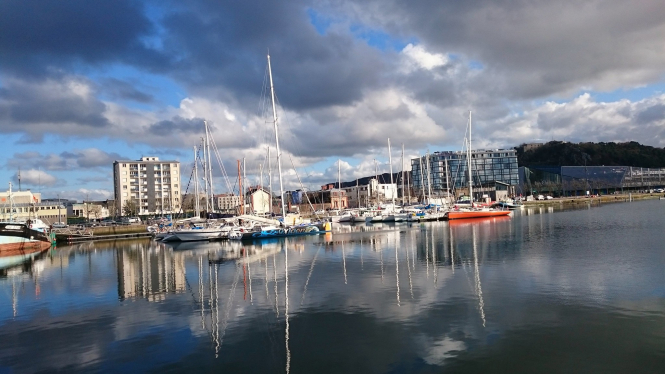 Authorities in Cherbourg-en-Cotentin (the commune in Manche whose main town is the port of Cherbourg (pictured)) are taking a tough line on those who abandon boats in the town’s Chantereyne port Pic: Cherbourg / Flickr

48 households in Calvados, Normandy, are participating in a ‘zero waste’ (zéro déchet) experiment, during which they weigh their household waste with the aim of reducing it between now and June.

The programme, co-ordinated by Syvedac (Syndicate for the Valorisation and Elimination of Waste in the Caen area), found that the average amount of waste by those who signed up was 39 kilos per household, or 13 kilos per person.

Syvedac’s aim is to raise awareness about waste reduction – it suggests people adopt up to three new “eco-gestures” per month, from a list of 80 ideas.

“When I received the proposal from Syvedac by email, I signed up and was Green news selected for the experiment. I told myself that it was time to change my habits,” Virginie Nosile, a resident of Saint- Aignan-de-Cramesnil, told France Bleu.

“To start with, we have chosen to stop using paper towels and cling film. We also avoid buying overpackaged products at the supermarket,” she added.

Abandoned boats to be removed

Authorities in Cherbourg-en-Cotentin (the commune in Manche whose main town is the port of Cherbourg) are taking a tough line on those who abandon boats in the town’s Chantereyne port.

The mairie wants to revoke the rights of owners who have ditched their vessels. Of the 1,600 moorings in the port, about fifteen are occupied by abandoned or unmaintained boats.

According to Muriel Jozeau-Marigné, deputy manager at the marina, an unmaintained boat is an ecological disaster: “The paint peels off and falls into the water. And then time passes, the boat is damaged and it ends up sinking”.

Currently, the municipality cannot remove a boat without the owner’s agreement but with this legal move it hopes to establish a new right of ownership, which will permit them to give the boats a new lease of life by renovating them.

Time for a change... of nappies

A French start-up is testing recycling of 100% biodegradable baby hygiene products such as nappies into fertile compost.

Couches Fertiles is the project being conducted by Les Alchimistes (who already compost 700 tonnes of food waste a year), which sees thrice-weekly collection of used nappies in the Paris region.

They are then converted into compost over a ten-week process, starting with the the removal of plastic velcro tabs. “A nappy is very rich in bio-organic and biodegradable matter, coming not only from excrements but also from cellulose,” said project leader Maïwenn Mollet.

Up to 650 people protested in Besançon against what they call the ‘concretisation’ of 34 acres of former agricultural wasteland, currently home to market gardening land and allotments in the Vaîtes district.

The planned “eco-neighbourhood”, would eventually include 1,800 new homes, as well as a school and shops.

In an online statement, the mairie said: “Reconciling all environmental issues with social imperatives is the challenge we all face”, and that “we are launching a broad participatory process”.