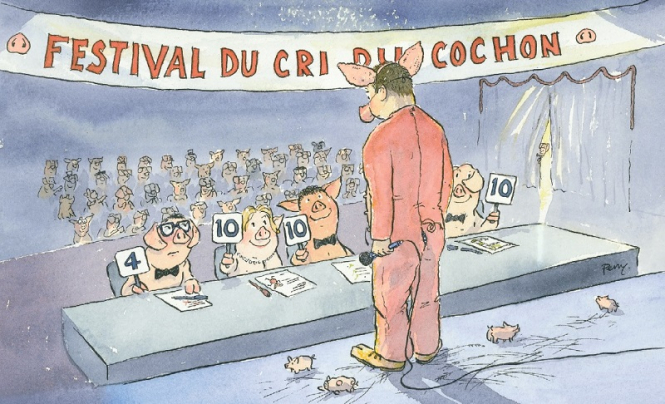 One of the more colourful events this summer is the Championnat de France du cri du cochon, the French pig imitation championships (yes, you read that correctly).

Artist Perry Taylor, whose images regularly brighten this page, lives near the contest.

“It’s true! Grown men wear fluffy onesies and a spongy pig nose and make some pretty explicit noises as they are asked to portray impregnation, birth, feeding piglets and being slaughtered,” he said.

“Candidates come from all over France. The prize is a pig carcass: about 200kg of pork.”

He said the piglets depicted in his image above are part of the show as contestants try to reproduce the sounds of a mother pig suckling. “They use more soothing sounds to get the young to find the teat,” he said.

The contest is the highlight of the Pourcailhade pig festival, which is now in its 38th year at Trie-sur-Baïse in the Hautes-Pyrénées. This year’s event is on August 11 (more details at tinyurl.com/y7f6gedc).

It marks the fact that the village used to host France’s largest piglet market until the 1980s.

As well as the imitations, there’s a boudin-eating competition, a pig throwing contest (fluffy pigs) and a piglet race.

It is not the only animal imitation contest, however...

Another, which competitors take just as seriously, is the French championships of imitation du brame du cerf (imitation of stag cries) which will be held at the Parc Ani­malier de Sainte-Croix in Rhodes, Moselle, on September 8 (tinyurl.com/y5yetwny).

Some other unusual French annual events include:

Organisers say lying is an old Gascon tradition which they celebrate by electing a Liar King who is the person who tells a tall tale most convincingly.

Each candidate sits in a “liar’s chair” and tells their tale to a jury, who mark them by spooning out salt into a bag held out by a young page, using wooden spoons. The winner is the one whose bag is heaviest.

It is played with wooden boules that must be thrown as near as possible to a smaller cube called the titchon.

The world championships take place in the picturesque Hauts-de-Cagnes near Nice – this year on August 17-18.

If you want to take part, see  http://cercleamis.cagnes.free.fr/boules-carrees/bc.html

Some genuine records in such important sports have been set at the event. There are also clowns, jugglers, stilt walkers and giant puppets and it ends with food, dancing and fireworks (mairie de Mahalon - 02 98 74 52 76).

The jousters stand in the prows of rowing boats dressed in white and wearing boaters and are hailed by fanfares from bands when they strike a good blow.

One highlight is the tournament from August 22-26, for the festival of Saint-Louis.

William set off from Dives-sur-Mer near Caen but his ships were blown off course and he sought refuge further north at Saint-Valéry-sur-Somme where he assembled for the departure.

On July 18-21 the town and its inhabitants take on a medieval look with street entertainments and demonstrations of traditional crafts.

Locals dressed as William and Queen Mathilde parade around and receive the keys of the town from the mayor (see lesfetesguillaume.com).

It derives from a legend that a lord was locked into a tower in his castle by thieves and he escaped after attracting attention by throwing out his silver ladle stamped with his coat of arms.

The main event is a medieval parade at 15.00 during which participants throw wooden ladles into the crowd. More ladles are then chucked off the balcony of the town hall (fete-des-louches.com).

It involves three young men being dressed as bears by being wrapped in sheepskins and covered with sooty oil.

They are then hunted through the town by hunters who fire blanks while the bears in turn try to smear the hunters’ clothes.

They are caught by barbers dressed in white and with white painted faces then ‘sheared’ of their sheepskins using an axe as a razor and a blood sausage dipped in wine as a shaving brush (tinyurl.com/y5cqgzee).