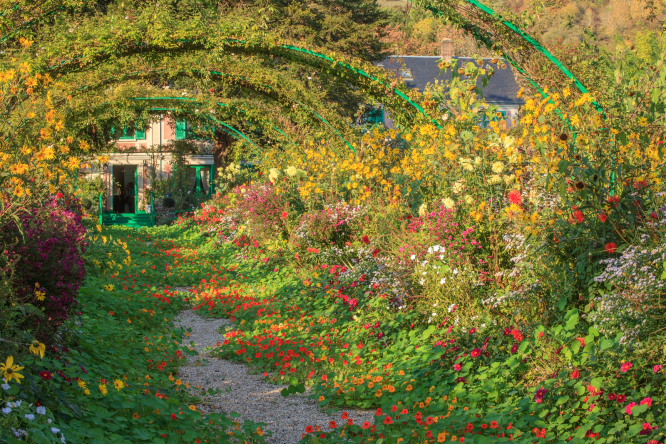 In September there are gardens to visit for Open Gardens/Jardins Ouverts, the association which encourages gardeners of all nationalities to open up their gardens, big and small, to the public, to raise funds for charity. Some have fixed opening days and others are open by appointment.

They bought their home with 3.5 acres, set on a hillock with magnificent views over rolling countryside, six years ago. Since then they have transformed the garden from an overgrown wilderness to what Sarah Asplin describes as a mix of a traditional English cottage garden style and a densely-planted hot border of tropical- feeling plants:

“This ‘jungle-feel’ is also being developed in the large courtyard,” she says. “A steep bank, formerly nettles and brambles, is now planted entirely with plants donated or grown from cuttings, seeds or divisions. Our two gîte gardens consist mainly of drought-tolerant plants which require little maintenance over the summer when the gîtes re let.”

It has been hard work: “It is almost solid chalk here, and Sarah sometimes had to go out with a pick-axe before she could plant,” says David Asplin. “One of our first early purchases which has proved invaluable was a shredding machine. There is plenty of vegetation that needs cutting back and we shred it and put it on the garden as mulch in a 6 cm layer. It keeps moisture in and improves the soil by adding organic matter.”

In September a collection of salvias, some of which are little known in France should be in flower, plus canna lilies, tithonias, wonderful red banana trees, dahlias and a tetrapanax.

A garden with nearly 2,000 rare species at Lunel, Hérault can be visited by appointment throughout September by calling owner Henry Nardy on 06 75 22 34 67.

He is a retired nurseryman who has built up his garden during retirement and aged 84, still tends his 3,500m2 plot with loving care.

“I have been gardening for 72 years, since I was twelve,” he says. “I don’t know how to do anything else, not even change a light bulb. I spend a good three-quarters of my time in the garden. I want it to be a place where people see plants they won’t see anywhere else.”

With his modest pension, he spends a maximum of €150 a year on new plants, but seizes any opportunity to buy or exchange or be given any unusual variety he finds at a plant fair, via friends or through research. There is a wide range of plants including cacti, grasses, yuccas, viburnums, osmanthus, araucaria coniferous trees and the Moroccan argan tree, known for its oil.

Two exotic examples are the spiny shrub Colletia cruciata with thorns in the shape of a cross, originally from South America and Clerodendrum trichotomum, with vividly coloured red petals surrounding a blue berry centre.

“I like anything which is a bit different. I have an Algerian iris with leaves unlike other irises and a buddleia which flowers in winter and smells wonderful. One of my favourites is Oxypetalum coeruleum or tweedia, with small flowers in a porcelain blue I adore.

“I hope anyone who comes to my garden, will make new discoveries. You have to come often over the seasons to see the best of everything.”

Annie Specht-Carpentier opens her garden, 37, Le Grand Bagnol, Fromental, Haute-Vienne, by appointment only and says September is one of the months when it is looking at its best.

Mrs Specht-Carpentier began developing the garden when the couple retired ten years ago to the former farm they bought nearly thirty years ago:

“There was nothing here so I have planted everything you can see now. The higher part used to be pastureland and is bordered by mixed hedgerows which are there as an attractive background to the borders, but also as food and shelter for birds and small mammals like hedgehogs. It is very colourful in autumn from the hedge and trees, of which some are rare. There are malus, prunus, cornus, viburnum and other species.”

The second, lower part of the garden has an English cottage garden style with perennials, roses, clematis, shrubs and annuals which self-seed such as foxgloves.

Mrs Specht-Carpentier says she plants according to “feeling”, inspired by finds she might spot at a plant fair. She then looks for the right place in the garden, and if it works she leaves it, and if not she moves it to another location. Giving her new plants a good start in life is essential:

“I follow the advice of a wonderful gardener, Princess Greta Sturdza, who is no longer alive, but who developed a garden, Le Vasterival near to Dieppe, still open to the public. When she planted trees she dug a hole, at least 80cm deep, put the good topsoil in the bottom and filled the rest with a carefully prepared mixture of compost, bone meal and anything else that is necessary on top. It can take me half a day to plant a tree, but I have found it is worth it.”

Mrs Specht-Carpentier says she has designed her garden so there is something of interest throughout the year, even in winter.You can ring to make an appointment on 06 34 95 26 49.

You can find open gardens for September on the calendar, or the frequent openers page.