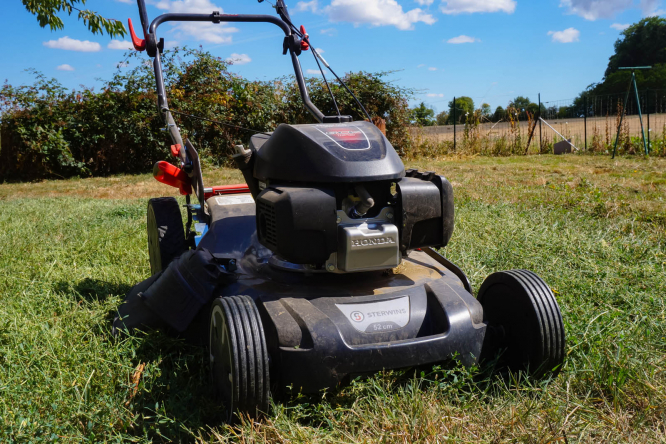 'An alternative labour-saving tactic (which actually ties in quite nicely with ‘no-mow May’) is to have different areas of grass that are treated in different ways' Pic: S. Pech / Shutterstock

Mowing the grass is a little bit like hoovering the carpet. If you do not do it, then everything else looks a mess. When you finally get round to it (even if you do not do the dusting/aka weeding) then suddenly the garden takes on a new, well-cared-for look.

2021 saw a new UK lawn management suggestion that everyone is (lazily) trying out. It is called ‘no-mow May’ (launched by Plantlife) and aims to maximise flower and nectar production at a crucial time of year. The trigger was a noticeable reduction in wild flowers during the April/May drought of 2020, with a knock-on effect on garden biodiversity.

It is a nice idea, but I am preferring ‘no-mow August’, although it hasn’t got the same ring to it! My garden should look splendidly well-tended in May and, in any case, is already heaving with insects whether the lawn is cut or not. When the grass is brown and tired looking in August, I think it’s time to lay off and take a rest in preparation for the arrival of the autumn rains.

Now, I would love one of those little robot lawnmowers that you just programme and leave to do its own thing. But an alternative labour-saving tactic (which actually ties in quite nicely with ‘no-mow May’) is to have different areas of grass that are treated in different ways. So, you choose the most essential areas to keep consistently short – your standard ‘lawns’ with nothing much but daisies (but hopefully not dandelions) to adorn them.

Then choose areas for a second regime where you allow the grass to grow no higher than about a half a metre. You might be cutting it once with a strimmer every six weeks or so between the end of May and the middle of September, and you can use these areas to plant bulbs such as crocuses, small daffodils and species tulips like yellow Tulipa sylvestris or T. whittallii.

The point about ceasing to cut after mid-September is that your crocus will begin to produce their foliage for the following season and you will weaken the corms if you cut the grass – but make sure you give it a short, back and sides just before the crocuses appear. Incidentally, this month is a good time to order those bulbs, in preparation for planting late August through September.

The final area is, of course, the ‘wildlife meadow’. This may sound rather grand if there have never been any wildflowers in your garden – perhaps the previous custodians were a little repressive in their grass management?

However, it will not take too many years for things like oxeye daisies, ladies’ smock, cow parsley and wild carrot to reappear – perhaps even orchids - without any help from you. This area is cut only twice a year: once in June (providing a useful mulch for borders), then again at the end of September into October. Into this area you could plant tall daffodils, alliums and the like.

The key to all of this is an advance plan, because your three different mowing regimes can provide the bone structure of a new garden. At least twice in the past I have used the method to mark out new borders for the future – even if they remained simply a twinkle in the eye for a year or two, the patterns I made were there for me to use as a garden blueprint, when I found the time.

Straight lines tend to work well in my garden (which flows out from an old house and a long central flight of steps), but don’t forget the curves! A lovely example of a mowing regime that really makes its design mark on the garden are the mown grass paths next to the moat at Helmingham Hall in Suffolk.

Instead of cutting in straight lines next to the body of water, some bright spark had the idea to cut the grass short in a wonderful, but still very regular, wavy line, leaving the grass on the other side, right next to the water, to grow long as in the third regime that I have described above. Try it – there are more ways to add structure to your garden than using paving, steps, trees and shrubs. All you need is a decent lawnmower, a strimmer and a thoughtful eye for design.

Late summer colour can be hard to come by in hot France and so I tend to rely on dahlias, asters and crocosmia. All of these perform decently in heat and dry conditions (in spite of a frequently advertised preference for summer watering) and really come into their own in the more subtle light of late August.

I recently discovered that not only did my famous neighbour, the nineteenth century nurseryman Victor Lemoine of Nancy, gain an international name for himself in the world of lilacs, he also played around a lot with crocosmias. He was the first plant-breeder to really get cracking on their possibilities.

His ‘play’ produced the well-known (and infamous in some parts of the world) montbretia, Crocosmia x crocosmiiflora. Many of the named cultivars he produced have been lost, but apricot-flowered ‘Gerbe d’Or’, with bronze foliage, persists on the market. A worthy yellow-flowered successor is the modern ‘Paul’s Best Yellow’.

My favourite, and arguably the most commonly available crocosmia in France, is fiery red-flowered ‘Lucifer’. However, since it flowers as early as July, I struggle to class it as late-season colour. For late-season certainty, try large-flowered, toffee-tinted ‘Star of the East’ instead, often still on the go in October.