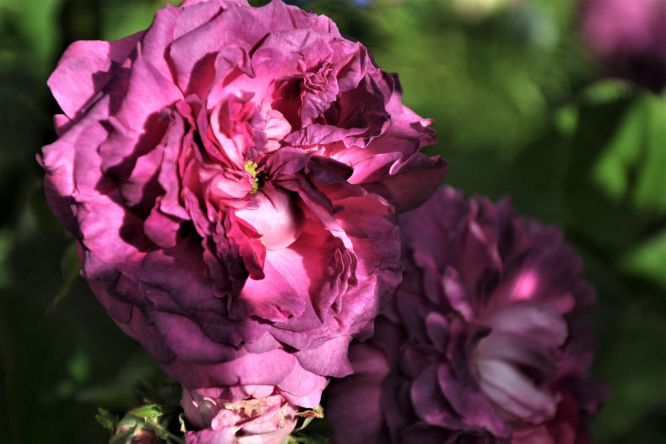 'Gallicas are tough and drought-resistant', says Cathy Thompson, 'carrying orangey-red, vitamin C-rich hips that make them as gay in the autumn sun as in the long days of June and July' Pic: Courtesy of Cathy Thompson

I have every possible digit crossed that this summer and autumn will see a return to some sort of normality – but I do not yet know. Like many of you, I moved to rural France to pursue my love of gardening and living outdoors in the sun – confident that because I was very self-sufficient I could only thrive.

Yet I cannot be the only Anglophone living in rural France who has been made to realise the rich value of everyday human contact, however small.

I duly built a small social network around me – not family, but dear friends and acquaintances encountered weekly through choir, orchestra, village events. Crucially these were all group activities.

Sometimes I heartily resented those activities in the summer because they took me away from my precious garden. But suddenly in March 2020 those rewarding (and sometimes fraught!) relationships vanished, and all that was left were masked greetings in Aldi, Lidl or Intermarché... not to mention that this past year has seen a huge falling off in my attempted mastery of French. Retour à la case départ!

Learning to love people anew, I have always valued connections with real, historical people and events in my garden plants, and so I am rounding off my encouragement to plant heritage roses by taking a look at the last of the four main groups, the Gallicas, especially three favourites in my own garden: ‘Rosa Mundi’, ‘Cardinal de Richelieu’ and ‘Belle de Crécy’.

Our French native rose was given the epithet ‘officinalis’, because it has been part of the human medicine chest for centuries, known also as the ‘Apothecary’s Rose’. Rosa Gallica var. officinalis was cultivated by the Greeks and Romans, for perfumery, celebratory occasions and use in the kitchen, but it was the Dutch (we owe them so much!) who began breeding in the 17th century.

Gallicas also play a big role in our public landscaping. Wherever you see a bank of fragrant, pink, red or dusky purple roses growing to about a metre high in your local commune you are (most probably) looking at Gallicas.

Tough and drought-resistant, they carry orangey-red, vitamin C-rich hips that make them as gay in the autumn sun as in the long days of June and July. They also have a tendency to sucker or ‘run’, making them ideal subjects for cover in wilder areas of the garden.

The large, semi-double, pink-splashed flowers of ‘Rosa Mundi’ are said to have been named for Fair Rosamund, alias Rosamund Clifford, the mistress of Henry II of England who was Eleanor of Aquitaine’s husband.

Unproven myths that she was actually killed by Eleanor first arose in the 14th century, well after Rosamund’s death around 1176.

Perhaps the splashes of dark pink on white petals reminded those who first discovered the rose, ‘Rosa Mundi’, in a garden in Norfolk in the 15th century, of that mythical murder?

This is definitely a gently running rose – and I find it thrives rather beautifully in light shade, where the colouring of the petals becomes even more mysteriously entrancing. Fair Rosamund in the maze at Woodstock?

Cardinal de Richelieu, a rather unpleasant, Machiavellian individual, was very important to my own village, since it was his French troops who sacked Châtillon-sur-Saône in 1635, when it was thriving and stable after its Renaissance flowering.

I love the rose, but the name does remind me that its namesake caused the village to lie deserted for nearly 100 years, so that weeds grew in the empty streets in front of rather grand (if small) aristocratic ‘hôtels’. Deep violet-red in colour, I have not noticed any signs of this rose ‘running’, but when flowering its branches are so heavy that it will definitely need support. A circle of hazel rods, cut from the garden in February, and then laced about with woven willow to provide stability and a resting place for the branches should do the trick.

'The town of Crécy needs no reminder of its significance in Anglo-French relations, although the rose was only named in 1848 and does not connect to the historic battle near Calais at all'

However, there are tantalising rumours of a connection with rose breeder, Julien-Alexandre Hardy, and the grounds of the chateau of Mme de Pompadour (destroyed after the Revolution), at Crécy-Couvé in the Eure-et-Loir.

This little rose is one of the sweetest of all Gallicas, if you can forgive its fierce running habit (it pops up everywhere now in borders where I have planted it). If you have slopes in difficult-to-garden areas it will do you proud with its ability to cover and smother! Give it a little time to really get into your hair. You have to love that tired violet, crushed velvet look that is typical of many Gallicas.

People and plants are inextricable. If you have not done so already, perhaps at the end of 2021 and going into 2022 you could mingle the two in the most satisfying way by volunteering to open your garden for charity through Jardins Ouverts?

The people you will find are the best: French and English speakers joining up to share a common love.