Charming story of photographer who befriends a fox 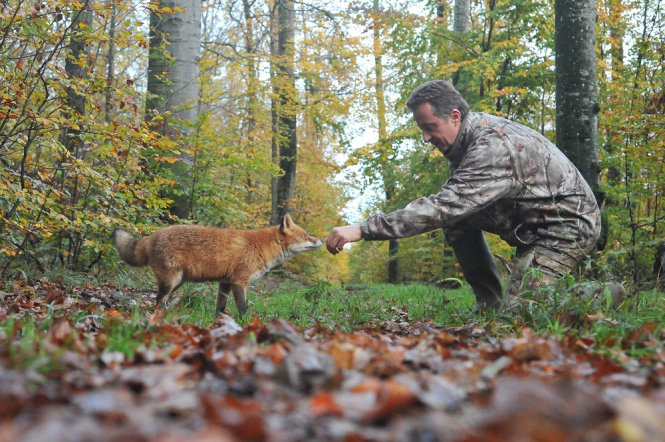 Some of the 15,000 images that Bruno-Gilles Liebgott has taken of the fox that surprised him one summer day in 2018 by edging close enough to where he hid to sniff his hand will feature in the work.

The female cub’s mother had been killed by a hunter three months before, shortly after being photographed by Mr Liebgott.

He continued to return to the wood, hidden under camouflage nets, and noticed the cub coming closer and closer, and even starting to sniff his camera equipment.

Once the fox which he named Fifine approached especially close to him and stayed just a metre away within his hiding place. Mr Liebgott removed his camouflage hood to show his head and held out his hand and the cub approached and sniffed it.

Since then the fox has remained confident with him and often looks for him in the forest in Meurthe-et-Moselle, north-east France. “It is something you can’t explain but I would follow it and then it would follow me,” Mr Liebgott said.

He has never touched Fifine as he made a promise to himself not to disturb the fox but he has been able to observe it from very close.

With the ‘friendship’ he realised a childhood dream. “Mother Nature made me a huge gift by putting Fifine on my life path,” he said. “I was 10 when I read Le Petit Prince by Antoine de Saint-Exupéry.

“One extract with the fox touched me deeply and 40 years later, my childhood dream has become reality.”

He said: “I’ve been able to see the fox live in the wild, catch a prey two metres away and interact with other foxes.”

Fifine gave birth to two cubs in spring 2019, one of which died naturally later, and will probably have other cubs in the next few months, said Mr Liebgott.

As an advocate for fox protection, Mr Liebgott made a deal with hunters to protect the foxes of the area which are part of Fifine’s grouping. He said: “Some hunters have stopped killing foxes after hearing about my story. Young hunters are often more positive and listen to what I say.”

The book which he is still writing will also include notes he made from each of their many meetings and more information on the life of Fifine and her cub.