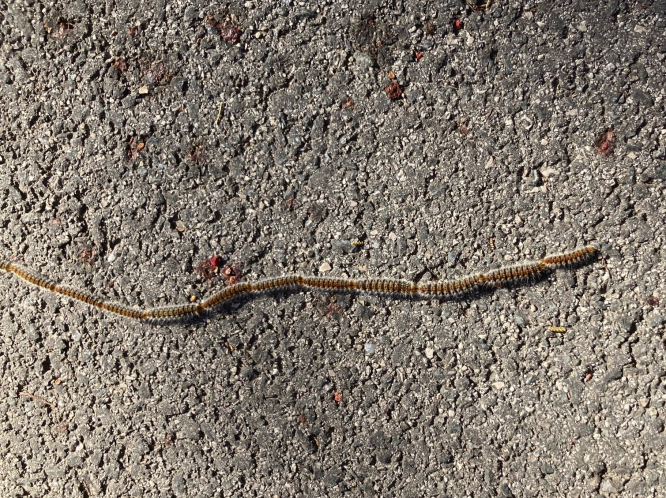 The caterpillars - known as chenilles processionnaires du pin in French - are toxic. The tiny hairs on their bodies are an irritant, and they can be especially dangerous to children and dogs, who may play with them or eat them accidentally.

They have been spotted - in the Alpes-Maritimes, for example, where the main image for this article was photographed in the commune of Vence - leaving their nests in trees and marching in line to burrow into the ground for the next phase of their development cycle.

They can be recognised by their white, cotton-wool nests in pine or oak trees, and their tendency to move in long “processionary” single-file lines along the ground.

Both pine and oak varieties of the caterpillar have been reported as spreading further north as Europe becomes warmer, and have even been sighted in Belgium and the UK, as well as France.

Touching or even getting close to the caterpillars can be dangerous; their hairs can cause severe skin and throat reactions, blisters, conjunctivitis, and even asthma attacks. Pets and young children may be especially sensitive.

The caterpillars can also be damaging to the environment, and can strip bark from trees.

France has been testing methods of caterpillar pest control for years, including encouraging residents to provide more bird nesting boxes.

Councils have sought to install more nest boxes in forest areas, as birds such as the great tit, coaltit and great spotted cuckoo are a major predator for the caterpillars.

Some councils have installed eco-friendly “belts” around trees, designed to catch the caterpillars, and keep them from moving along the ground.

Drones have also been used to locate nests, and spray and destroy them. Microbiological control has also shown good results. Trees are sprayed with a bacterium which poisons caterpillars, but does not affect other species. The treatment has to be repeated every 10 days.

In 2017, pest control agents even began to use paintball guns to fire pheromones into trees to dissuade moths from mating in the first place.

Residents are not encouraged to deal with the caterpillars or try to move them unaided or without adequate protection, as even getting close to them can cause severe reactions.