How to build a cosy hedgehog cabin 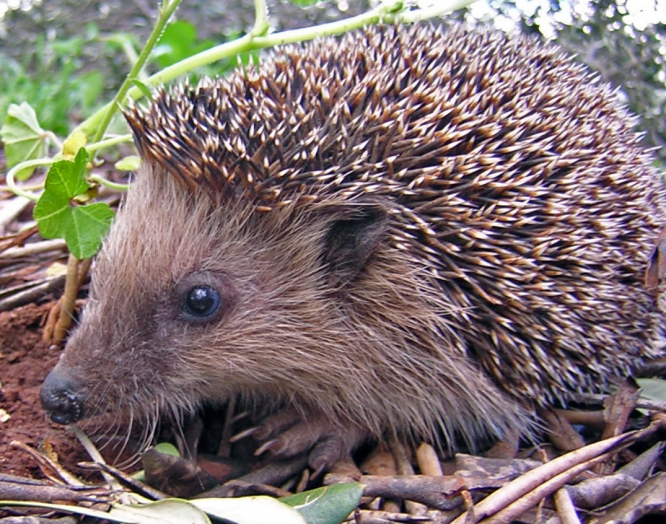 ‘Hedgehog cabins’ – offering protection from the sun, or shelter from the cold, and a safe place for them to breed – are being made and sold by a French environmental association to help the animals survive.

Hedgehogs (hérissons) were a common sight in the evenings in France but have become increasingly rare, with some animal groups fearing they could be extinct by 2025.

The prediction is based on UK studies which show a 50% fall in the number of hedgehogs between 2000 and 2018.

Officially, hedgehogs are classified by the international nature organisation IUCN as being at the stage where there is a minor risk of disappearing.

They have been protected in France since 1981, meaning they cannot be killed, harassed or kept as pets.

Only registered centres can look after injured hedgehogs.

One UK study carried out by the charity People’s Trust for Endangered Species which involved members counting the number of hedgehogs killed on the roads found there was a 50% fall.

Other studies, based on counting hedgehogs in areas where they are known to be established, reported a 30% fall during the same period.

John Philpot of Les Goelands in Normandy said: “We do not know for sure what is happening in France but people are worried, and the 2025 extinction date is not too fanciful.

“All over France, people are either saying they have not seen hedgehogs for years, or that when they do see them, it is a rare event.”

The main threat to hedgehogs is thought to be the use of insecticides, especially the neonicotinoids that are also implicated in declining bee numbers, and which are now being phased out in France.

Hedgehogs feed mainly on insects, slugs and snails, and the fall in the number of insects is thought to directly affect them.

Slug pellets, including those labelled bio (organic) also indirectly poison hedgehogs which may eat them, as slugs and snails often die before they hide themselves in areas hedgehogs cannot reach.

Road kills are the second major cause of hedgehog deaths, followed by habitat loss as hedgerows and other areas they need to sleep in during the day, and to make safe nests, disappear. They also need to find dried leaves or straw to hibernate in when the temperature drops below zero.

Les Goelands says it has perfected a hedgehog cabin (design shown below) for them to shelter in and has been surprised by the interest since it started selling them.

“In nine months, we have received more than 400 orders from all over France and Belgium,” said Mr Philpot. “There are usually between two and four of us making them in my garage, so we are busy.”

The shelters are designed with the entrance to the nesting or hibernation chamber separated from the main entrance. They are made of a bamboo fibre board, which is waterproof and does not need painting or varnishing.

Their design, from another association Le Hameau des hérissons, protects the hedgehogs from cats. “Cats are wary of adult hedgehogs, because of their spines, but if they find young ones whose spikes have not hardened, they play with and eat them,” said Mr Philpot.

The cabins are sold locally, assembled, for €15, and Mr Philpot delivers in the area.

For €20, a flatpack version, with assembly instructions, can be delivered nationwide. See association-lesgoelands-stesuz.jimdofree.com.

Leaves, moss and cat food can be placed in the interior to attract hedgehogs, especially in autumn, when they are looking for places to hibernate. If, after a couple of weeks, the shelter is not occupied, try moving it to another part of the garden.

If you have a garden in France,
have you noticed a change in hedgehog numbers?
Tell us at news@connexionfrance.com