Meet the French man who saved the peregrine falcon 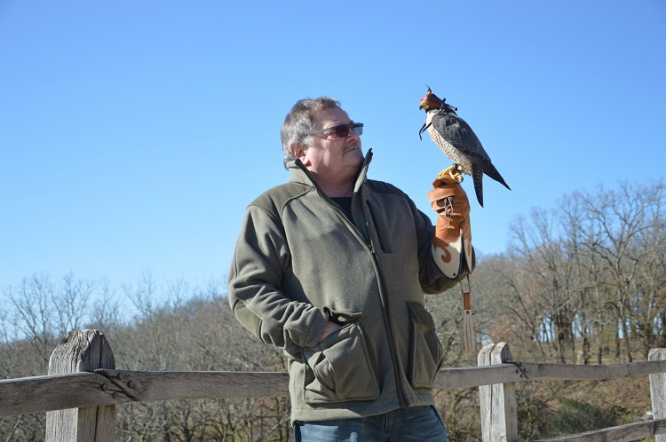 Raphaël Arnaud with a Peregrine Falcon
By Connexion journalist

Raphaël Arnaud has made it his life’s mission to save the peregrine falcon and other birds of prey from extinction.

He founded the Rocher des Aigles 42 years ago at Rocamadour, Lot, where the public can see birds of prey, parrots and owls flying from the cliff-top site over the deep valley below.

The shows are designed to be entertaining and instructive, as the first mission of this site is not to amuse tourists but to be a conservation centre.

Behind the scenes, an internationally renowned reproduction programme has bred 1,500 young birds from 35 species, allowing populations of birds in danger to be maintained and restored.

What prompted your lifelong obsession with birds?

When I was a boy living on the Normandy coast in the 1950s, I loved seeing these magnificent birds in the wild. At that time, you could find peregrine falcons nesting on the cliffs every two kilometres.

I even wrote to the Muséum National d’Histoire Naturelle in Paris to find out where I could get more information and joined a falconry club.

I later trained to be a chemist working in a petro-chemical company, but became more and more horrified as the introduction of pesticides led to a drastic reduction in bird of prey populations.

In 1970, there was just one pair of peregrine falcons left in Normandy, and a hundred left in France. Their population had diminished by 90%.

So I left my job and became a confirmed ecologist, working for an association which monitored bird of prey populations across France.

This took me to the Lot, where there were just 14 pairs of peregrine falcon left. I am proud that, due to my work and that of other associations, there are now 50 pairs in the Lot and this species is off the danger list.

Why did you choose to keep birds in captivity, which are surely better off in the wild?

In 1977, I was already caring for 30 birds which had been given to me because they had been wounded or had been seized by the authorities and passed on to me.

I was one of the first to consider reproduction in captivity, to build up numbers of birds in danger of extinction.

But to do that I had to have money, and I thought the answer would be to put on a show for the public and use the proceeds for the centre.

Surely, these great birds do not like to be confined?

In the wild a bird of prey only flies when it is looking for food. You may think they are flying for fun when you see them wheeling in great circles in the air, but that is an anthropomorphic approach.

The birds are in a state of constant stress when out flying, because they are looking for the food which will keep them alive, and at the same time they are constantly on the lookout for any potential danger.

When a vulture has had its fill, it will spend hours motionless, without any desire to fly.

Should these majestic birds be tamed by man?

We are very careful to build up a relationship with each bird when training it and we make sure that food rewards are not the only reason they will fly for us.

The Centre National de la Recherche Scientifique has studied our birds and found that when they fly away as part of the show and stay out for as long as half an hour, rising to heights of 2,000m and going as far as 15km, they are in a state of liberty and come back because here is home.

A man had seen a Himalayan Vulture on his rooftop and asked if it was ours, which indeed it was.

Ten days later there was no news, until someone in Brive-la-Gaillarde, some 40kms away saw our vulture. That afternoon, he arrived back here. Isn’t that just a wonderful story?

How successful is your breeding programme?

In the past five years, we have been the only zoo to have second generation birds born into captivity, in particular 10 young condors.

I think we have been successful because we constantly observe the birds, rather than follow advice from scientists.

It is not easy when many of the birds do not naturally live in couples, but only come together to mate.

Now that many birds are off the danger list, we have slowed the programme.

People come from all over the world to look at our methods and ask for advice.

Has it been easy to run the bird park?

It has been a constant struggle. We have never had any financial support and I have felt we have had constant opposition from local authorities, perhaps because this is still a land of farmers and hunters who are suspicious of what goes on here.

Ours is one of the only attractions in Rocamadour which only has three sign posts when you arrive in the town. Others have several much further away.

But we manage to keep going and have more than 80,000 visitors a year.

We have good comments on Trip Advisor, and when I see someone write that they not only enjoyed the show but learnt something from it, that is when I am the most satisfied. Education is the most important part of our work.

The Rocher des Aigles also owns land in Mexico. What is a French bird park doing there?

In 1989, during a study trip to Mexico for the International Raptor Congress, I met Carlos Elias Rodriguez who had sold his ranch to found an eco-tourist centre in the forest.

Some years later a five-hectare stretch of forest bordering the park was put up for sale and as Carlos could not afford to buy it, I did so with a friend, to prevent it being bought and cut down for tobacco or cattle.

Since then we have worked with universities and institutions and have successfully re-introduced howler monkeys which had disappeared in the region.

You can hear their cries now. We have also introduced two types of parrot back into the forest, which had not been since there since 1970.

Last year two young Military macaws were born in the hollow of a tree. Fabulous!

Are you optimistic for the future with environmental successes like yours taking place?

No. It is sad, but I think we are doomed. When I was young I believed in the future. Now people are nervous and anxious and there is a lot of mediocrity, and I do not think we are doing enough to save the planet.

I have done all that I could do and I am proud of that, but I am very pessimistic for the future.

Do you still love the birds of prey as much as you did when you were a boy?

Yes. It was very cold this winter and a pair of birds from Africa put their wings together to protect their eggs from the cold and I thought, they do not really need us, they find their own solutions to survive.

If Le Rocher des Aigles no longer exists in a few years, it will not matter, because it will have done the work that was necessary at a time when birds of prey in France were really under threat.